The ongoing severe drought in the Colorado River Basin has led to the river flowing at 84% of its historic average flow. An even more intense “megadrought” hit the region around 1,800 years ago, according to a new study published in the AGU journal Geophysical Research Letters. At just 68% of the river’s average flow rate, the megadrought is the most severe drought discovered in the arid region yet.

The new study used tree-ring data and other climate records to identify a drought period unmatched in severity by the current drought or other ancient droughts. It reveals a greater range of natural hydroclimatic variability in the Colorado River than previously recognized, highlighting a need for water managers to adjust expectations and prepare for even more intense drought.

The ongoing Colorado River Basin drought has extensive impacts throughout the West, including water shortages for homes and crops and decreased generation of hydroelectric power. The new knowledge for how much worse droughts can be, even without anthropogenic climate forcing, points to a potentially grim outlook for water in the West. 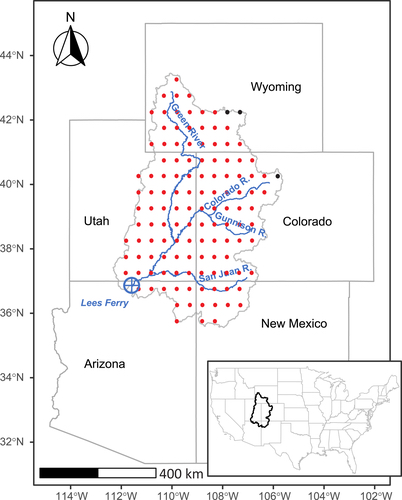 Previous studies have been limited to the past 1,200 years, but there are a limited number of paleorecords of moisture variability available back 2,000 years. While there has been research that shows extended dry periods in the southwest back to the eighth century, this reconstruction of Colorado River streamflow extends nearly 800 years further into the past.

—Subhrendu Gangopadhyay, lead study author and an engineer at the Bureau of Reclamation

The research found that compared to the current 22-year drought in the Colorado River, with only 84% of the instrumental period (1906–2021) average flow at the Lees Ferry gage, the flow during a 22-year period in the second century was much lower, just 68% of this average flow.

Although tree-ring data are sparse back to the second century, this extreme drought event is also documented in paleoclimatic data from lakes, bogs and caves.

—Connie Woodhouse, a professor at the University of Arizona and a study co-author

It’s quite compelling from the available tree-ring data that the second century experienced an extraordinarily severe drought, highly persistent, and very intense. It’s quite remarkable.

Water managers may use this new extended dataset to understand past droughts better and plan for future droughts.