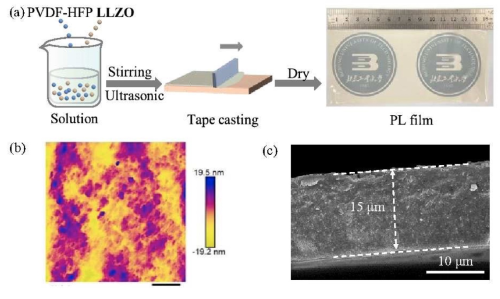 Fabrication and characterization of the thin PL film. (a) Schematic diagram of preparation and optical image of PL film. (b) AFM and (c) the cross-section SEM images of PL film. Wang et al.

… the energy density of SSLMBs [solid-state lithium metal batteries] is inversely proportional to the thickness and mass of SSEs [solid-state electrolytes]. It has been estimated that the gravimetric energy density of 400 Wh/kg can be achieved with the thickness of 20-30 µm for SSEs. However, the mechanical strength of thin SSE film would be poor and cannot eliminate the risk of Li dendrite penetration after long cycling, which cause the safety issue of SSLMBs. Moreover, when the thickness of SSE is reduced, the Li ions diffusion time and distance can be reduced greatly, and then the electrochemical performances of SSLMBs can be enhanced at high current density. For the CSE, it is essential to obtain the thin electrolyte film with high ionic conductivity and wide electrochemical stability window, and to enhance the energy density and electrochemical performances of SSLMBs. Although the PI/PVDF-HFP/LLZTO, PTFE/PVDF-HFP/ dual-salt PE, cellulose nanofibril/LLZO/PEO, separator network/PEO, and vermiculite/PEO/PAN/LiTFSI CSE film have been reported, the effective method for facile production of thin free-standing electrolyte film (<20 µm with excellent properties is still urgent to be developed for SSLMBs.

Here, a series of thin free-standing CSE films with the thickness of ~15 &micolm are prepared by tape casting and solution infusion method, in which the ionic conductivity and electrochemical stability window can be promoted to 2.76×10-4 S/cm at 25 °C and 4.8 V (vs. Li+/Li), respectively. Furthermore, the favorable interface stability of CSE film with Li metal can be achieved. Based on this CSE film, the SSLMBs show excellent electrochemical performance with high voltage cathode material.