ArcelorMittal published a concept for a low-carbon emissions steel standard to help incentivize the decarbonization of steelmaking globally and support the creation of market demand for physical steel products which would be classified as lower, and ultimately near-zero, carbon emissions steel.

The creation of clear definitions for low-carbon emissions physical steel is an important component of ‘demand pull’ and ‘supply push’ mechanisms that are required to support the steel industry in its transition to net zero by 2050, the company said. Clear definitions will also help inform targeted policy to support the scale-up and commercialization of these near-zero technologies.

The concept has three core principles:

Setting a standard to classify low-carbon emissions steel during our industry’s transition to net zero is critical to our decarbonization journey. We have spent a lot of time thinking about how to do this in a fair way that incentivizes all steelmakers to reduce emissions and ultimately achieve net zero. At the heart of our concept is a system that ensures that all steelmakers, both primary and secondary, are incentivized to further improve their emissions, and progress towards near zero is recognized and rewarded.

We know that there are many organizations giving this question a lot of thought. We are in close discussion with several of these organizations and have welcomed the opportunity to share our expertise of steelmaking with them as they develop their recommendations. As this is such a critical topic for the industry, we decided to directly publish the key principles we believe should be at the core of any system to officially categorise lower and near zero carbon steel.

We believe these principles will help incentivize the industry and will also prove intrinsic in providing transparency and clarity to steel consumers, guiding their purchasing decisions and helping to develop green steel lead markets.

Dual scoring system. Any standard must incorporate a dual score consisting of: a LCA value for finished products so that customers can clearly see the embodied carbon emissions of the steel they purchase, and; a decarbonization rating system akin to the labeling system already used in the EU for white goods, which measures the level of steel producers’ decarbonization progress.

Sliding scale based on percentage of scrap input. Any standard must incentivize all steel producers to progress towards net zero, irrespective of the technology with which they start. The carbon emissions in a tonne of steel are heavily influenced by the metallic input used in steelmaking, with secondary steelmaking (scrap-based) carrying a much lower carbon footprint than primary steelmaking (iron ore based).

Although scrap steel has an important role to play in the decarbonization of the global steel industry, it is a finite resource which is already fully utilized, and primary steel will continue to be needed to meet steel demand until well beyond 2050. Therefore, ArcelorMittal firmly aligns with the view of both ResponsibleSteel and the IEA that a low-carbon emissions steel standard needs to incorporate a sliding scale which accounts for the metallic input (primary/iron ore vs. secondary/scrap) of steelmaking and incentivizes decarbonization through the introduction of low-carbon emissions technology rather than simply by increasing the amount of scrap used. 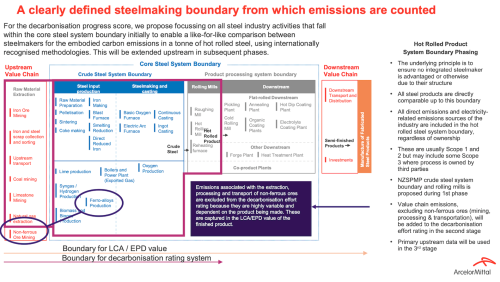 Boundary. It is critical that a consistent boundary is used in order to enable a like-for-like comparison between steel producers for the decarbonization rating system, and that this boundary is representative of the core emissions of steel production. Therefore, in its initial phase the ArcelorMittal concept proposes a core steel system boundary that can be readily measured today, based on the Net-Zero Steel Pathway Methodology Project, which counts all Scope 1 and 2 emissions as well as selected Scope 3 emissions from ironmaking, steelmaking, casting and rolling.

The graph below demonstrates the concept of how the decarbonization rating system would work: 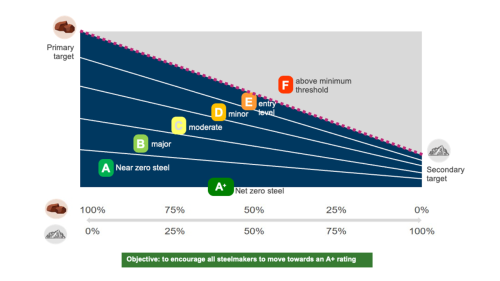 Furthermore, steel producers which fall on or below the threshold would then be split into six bands—A+ to E—with the producer progressing through the bands as it decarbonizes. This system could therefore be used by policy makers and customers to incentivize producers to decarbonize further in order to attain a higher rating (with A and A+ being the highest and the only category where producers could claim their steel to be near zero (A) or net zero (A+)).

Similar to ResponsibleSteel and the IEA, the threshold for near-zero steel should be set at a level which supports all potential decarbonization routes. 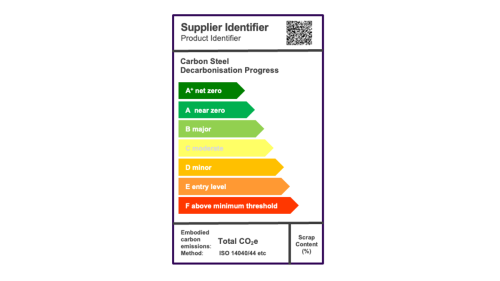 Finally, any standard should also still recognize the early actions taken by first movers to enable customers to report reductions in their Scope 3 emissions through the purchase of virtual certificates. This should be represented through the inclusion of the ‘S’ certificate.