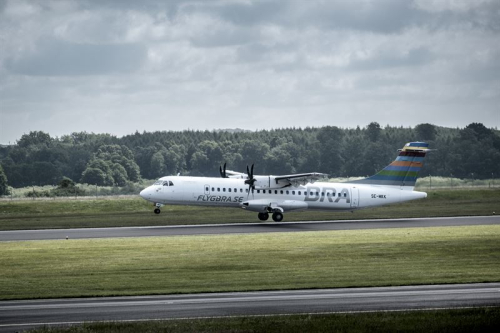 The test flight took place in Sweden and is part of the 100% sustainable aviation fuel (SAF) certification process of ATR aircraft that started in September 2021 in cooperation with Braathens and Neste and should be completed by 2025. It has been the latest in a series of successful ground and flight tests on the ATR 72-600 prototype aircraft performed at the beginning of 2022, including flights with 100% SAF in one engine. This latest test was the first time it was done with 100% SAF in both engines.

Chief ATR pilot Cyril Cizabuiroz, Jean-Marie Marre, co-pilot, and Pascal Daussin, Flight Test Mechanic, flew the Braathens’ aircraft from Malmö, a coastal city in southern Sweden to Bromma near Stockholm, which took around 1 hour and 20 minutes. The results of the flight will be analyzed and released at a later date.

Achieving the milestone was also made possible by Swedavia enabling the SAF to be uplifted to the ATR aircraft at Malmö airport and Pratt & Whitney, closely working together with ATR and Braathens in the preparations of this milestone flight.

This milestone affirms the opportunity that SAF plays in the aviation industry and is indicative of the strong commitment Pratt & Whitney has made to powering more sustainable aviation. We have worked closely with ATR and Braathens to ensure today’s successful flight test with 100% SAF.

ATR is the world’s leading regional aircraft manufacturer with its ATR 42 and 72 aircraft the best-selling aircraft in the less than 90-seat market segment. With the efficiency of turboprop technology and the benefits of the company’s focus on continuous innovation, ATR aircraft open more than 100 new routes on average every year, burn up to 40% less fuel and emit up to 40% less CO2 than regional jets. ATR is a joint venture between Airbus and Leonardo.