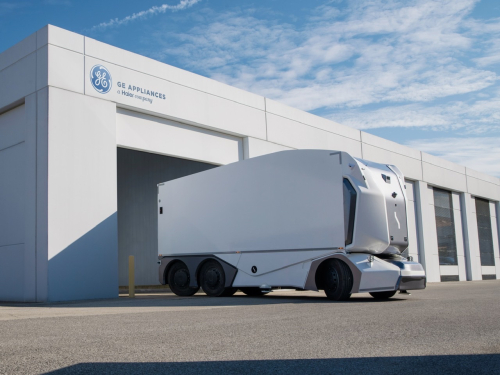 The Pod—with no space for a driver—is the first all-electric, totally autonomous transport vehicle to operate on a public road.

The autonomous and electric Einride Pod’s design does not leave room for a driver on board and is instead remotely monitored by a Remote Pod Operator, marking this pilot as an industry first for this new type of vehicle.

The Einride Pod will operate on public roads with mixed traffic while executing real life workflows. This will include the movement of goods and coordinating with teams at various warehouses for loading and unloading.

A Remote Pod Operator will be remotely monitoring the vehicle at all times—a first of its kind role that Einride sees critical in safely scaling autonomous vehicles by keeping humans in the loop and creating jobs to fulfill a future way of shipping.

The public road pilot, which will take place in Q3 of 2022, will be done at a GE Appliances manufacturing facility to complement other existing operations already in place together. Einride was the first to have a fleet of operational autonomous and electric vehicles on US soil in partnership with GEA in 2021.

Founded in 2016, Einride became the first company to deploy an autonomous, electric freight vehicle on a public road in 2019.

Anyone see the movie Logan (2017) ... looks like it is coming true...
https://www.youtube.com/watch?v=sAwc1XIOFME&ab_channel=kinobscura

It will be interesting to see how it pans out.

Yes the movie Logan did predict what may happen in Trucking, This is called “ human-in-the-loop autonomous technology”, similar to military drone tech.
Einride does have interesting tech: https://www.einride.tech/remote-pod-operation