The rapidly growing space industry may have a greater climate effect than the aviation industry and undo repair to the protective ozone layer if left unregulated, according to a new study led by UCL and published in the journal Earth’s Future as an open-access paper.

The space industry is one of the world’s fastest growing sectors. Global revenue generated from this industry is forecast to grow from 350 million USD in 2019 to more than 1 trillion USD by 2040 (Morgan Stanley, 2020). This demand stems from significantly reduced launch costs driven by commercialization, increased reliance on satellite technologies for global positioning systems, surveillance and broadband internet, and postulated space resource extraction and militarization.

To meet growing demand, new spaceports and launch vehicle companies are being established in historically aeronautically active nations such as the US and Russia, and in nations with emerging space sectors such as China and India. In 2021, commercial space flights by Virgin Galactic, Blue Origin, and SpaceX demonstrated that space tourism is plausible, though the scale of this nascent industry is uncertain. Such rapid growth demands detailed understanding of the potential impact on the protective stratospheric ozone (O3) layer and climate.

The researchers, from UCL, the University of Cambridge and Massachusetts Institute of Technology (MIT), used the global GEOS-Chem model coupled to a radiative transfer model to determine the impact of rocket launches and re-entry in 2019, and the impact of projected space tourism scenarios based on the recent “billionaire space race”, on stratospheric ozone (O3) and climate. 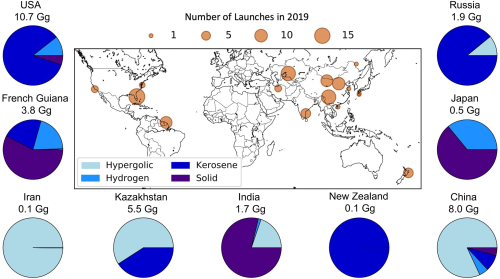 Locations and fuel types of rocket launches in 2019. Marker size in the map indicates the number of launches at each location. Pie charts indicate the proportion of the four main fuel types at each launch location. Numbers above each pie chart are total propellant mass used in each country. Ryan et al.

Due to recent surge in re-entering debris and reusable components, nitrogen oxides from re-entry heating and chlorine from solid fuels contribute equally to all stratospheric O3 depletion by contemporary rockets. Decline in global stratospheric O3 is small (0.01%), but reaches 0.15% in the upper stratosphere (∼5 hPa, 40 km) in spring at 60–90°N after a decade of sustained 5.6% a−1 growth in 2019 launches and re-entries. This increases to 0.24% with a decade of emissions from space tourism rockets, undermining O3 recovery achieved with the Montreal Protocol.

Rocket emissions of black carbon (BC) produce substantial global mean radiative forcing of 8 mW m−2 after just 3 years of routine space tourism launches. This is a much greater contribution to global radiative forcing (6%) than emissions (0.02%) of all other BC sources, as radiative forcing per unit mass emitted is ∼500 times more than surface and aviation sources. The O3 damage and climate effect we estimate should motivate regulation of an industry poised for rapid growth.

To calculate the findings, the researchers collected information on the chemicals from all 103 rocket launches in 2019 from across the world, as well as data on reusable rocket and space junk re-entry. They also used the recent demonstrations by space tourism entrepreneurs Virgin Galactic, Blue Origin and SpaceX and proposed yearly offerings of at least daily launches by Virgin Galactic to construct a scenario of a future formidable space tourism industry.

These data were then incorporated into a 3D atmospheric chemistry model to explore the impact on climate and the ozone layer.

The team show that warming due to soot is 3.9 mW m-2 from a decade of contemporary rockets, dominated by emissions from kerosene-fueled rockets. However, this more than doubles (7.9 mW m-2) after just three years of additional emissions from space tourism launches, due to the use of kerosene by SpaceX and hybrid synthetic rubber fuels by Virgin Galactic. 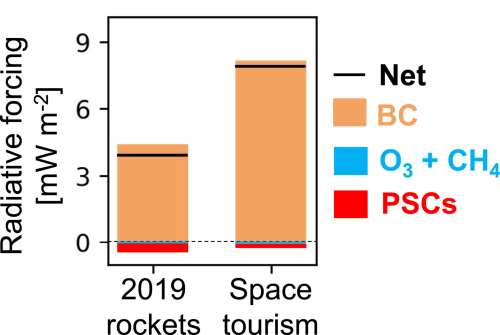 Effect of rocket launch and re-entry emissions on global climate forcing. Bars show the GEOS-Chem-RRTMG top-of-the-atmosphere instantaneous radiative forcing of BC (orange), combined O3 and CH4 (blue) and polar stratospheric clouds (PSCs, red) after a decade of growth in 2019 emissions (left) and after 3 years of constant space tourism emissions and growth in 2019 emissions (right). The black solid line is the net effect of all forcers. Ryan et al.

The researchers say this is of particular concern, as when the soot particles are directly injected into the upper atmosphere, they have a much greater effect on climate than other soot sources—with the particles 500 times more efficient at retaining heat.

The team found that, under a scenario of daily or weekly space tourism rocket launches, the impact on the stratospheric ozone layer threatens to undermine the recovery experienced after the successful implementation of the Montreal Protocol.

Adopted in 1987, the Montreal Protocol global ban on substances that deplete the ozone layer is considered one of the most successful international environmental policy interventions.

The only part of the atmosphere showing strong ozone recovery post-Montreal Protocol is the upper stratosphere, and that is exactly where the impact of rocket emissions will hit hardest. We weren’t expecting to see ozone changes of this magnitude, threatening the progress of ozone recovery.

There is still a lot we need to find out about the influence of rocket launch and re-entry emissions on the atmosphere—in particular, the future size of the industry and the types and by-products of new fuels like liquid methane and bio-derived fuels. This study allows us to enter the new era of space tourism with our eyes wide open to the potential impacts. The conversation about regulating the environmental impact of the space launch industry needs to start now so we can minimise harm to the stratospheric ozone layer and climate.

Appears to be excessive hand-waving alarmism and a notable shaming of a particular 'commercial/ tourism' industry rather than rocket launches (much of which are environmental monitoring and public communication satellites) in general, which have undergone may eras of elevated and reduced numbers vs long-term averages over more than half a century. Be wary of the environmental groups cherry-picking targets that advance a narrow and anti-technology-for-profit agenda, which is a detriment to all industries - business and social. Environmentalist propaganda cannot succeed on a 'don't do it unless it is a good thing' mindset as economic dynamism and innovation are the only means to achieve a less polluted world that is not also impoverished and under-civilized.

I wonder if launching billionaire space rides is necessary. While the rest of us work on stabilizing the world's climate and reducing fossil fuel contamination, the rich delight in tourist orbits around Earth . I have no problem if the fuel is hydrogen; however, that's usually not the case.

Luxury tax space rides based on damage and external costs. US Military should not be exempt. There needs to be an incentive to use cleaner LH2 fuel!