Since last year, a Mercedes-Benz GenH2 Truck fuel-cell prototype has been undergoing intensive testing both on the in-house test track and on public roads. Daimler Truck is now putting another prototype into operation to test the use of liquid hydrogen. 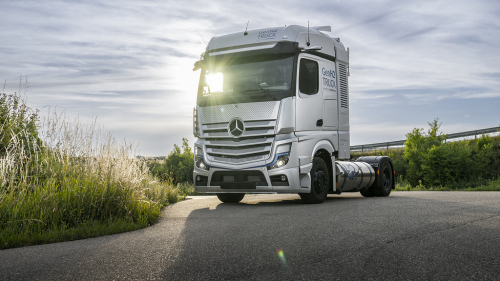 Political support for the development program comes from Daniela Schmitt, Minister of Economic Affairs of Rhineland-Palatinate, who opened the regional hydrogen week “Woche des Wasserstoffs SÜD” with a test drive in Wörth am Rhein, Germany.

A newly installed prototype filling station at the development and testing center in Wörth enables the refueling with liquid hydrogen. Recently, Daimler Truck celebrated the first successful liquid hydrogen (LH2) refueling of the truck together with Air Liquide.

During the refueling process, cryogenic liquid hydrogen at minus 253 degrees Celsius is filled into two 40 kg tanks mounted on either side of the chassis. With the particularly good insulation of the vehicle tanks, the hydrogen can be kept at temperature for a sufficiently long time without active cooling. 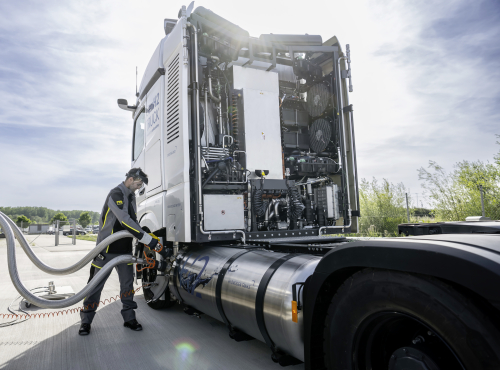 Daimler Truck prefers liquid hydrogen in the development of hydrogen-based drives. In this aggregate state the energy carrier has a significantly higher energy density in relation to volume compared to gaseous hydrogen. As a result, more hydrogen can be carried, which significantly increases the range and enables comparable performance of the vehicle with that of a conventional diesel truck.

The development objective of the series-ready GenH2 Truck is a range of up to 1,000 kilometers and more. This makes the truck suitable for flexible and demanding applications, especially in the important segment of heavy-duty long-haul transport. The start of series production for hydrogen-based trucks is planned for the second half of the decade.

At the same time, Daimler Truck has been working together with Linde on the development of a new process for handling liquid hydrogen: subcooled liquid hydrogen (sLH2).

The sLH2 process will use higher than ambient pressure levels (up to 1.6 MPa compared to conventional LH2 at 0.6 MPa) and special temperature control which avoids boil-off effects and “return gas” (gas from the vehicle’s tank returning to the filling station) during refueling. The process does not require complex data communication between the filling station and the truck during refueling.

Overall, the technology thus allows simpler filling-station concepts. The improved energy storage density is due to the higher than ambient pressure level which increases the hydrogen mass in the tank.

The companies plan for the first refueling of a prototype vehicle at a pilot station in Germany in 2023. Daimler Truck and its partners are planning for a high level of transparency and openness around the relevant interfaces of the jointly developed sLH2 technology. The goal is to collaborate with other companies and associations as possible to develop their own refueling and vehicle technologies that apply the new liquid-hydrogen standard and thereby establish a global mass market for the new process.

When it comes to infrastructure for hydrogen filling stations along important transport routes in Europe, Daimler Truck is planning to work together with the companies Shell, BP and TotalEnergies. Daimler Truck is also a shareholder in hydrogen filling station operator H2 MOBILITY Deutschland. In addition, Daimler Truck, IVECO, Linde, OMV, Shell, TotalEnergies and the Volvo Group have committed to work together to help create the conditions for the mass-market roll-out of hydrogen trucks in Europe as part of the H2Accelerate (H2A) interest group.

Interesting use of subcooled hydrogen, together with their rationale for employing it.

I have not readily turned up data sheets for energy per litre etc for subcooled hydrogen, so if anyone has some handy, it would be appreciated.

Naively, at 1.6MPa versus 0.6MPa for liquid hydrogen, it might be assumed, probably wrongly, that it has similarly reduced volume.

Of course, not only may that extrapolation be erroneous, but the mass of the tank to hold it at pressure may increase.

Any info would be welcome.

@Davemart
This reference should give you all the details.
“ Technology Pitch: Subcooled Liquid Hydrogen (sLH2)”
https://www.now-gmbh.de/wp-content/uploads/2021/05/Heavy-Duty-Event-Subcooled-Liquid-Hydrogen-sLH2-Schaefer-Linde-Maus-Daimler.pdf

A bit above my head, but the case for supercooled hydrogen against liquid seems pretty solid?

I am assuming that there is a misprint or something in that table.

WTF?
Presumably s/be 1300h or something?

I do not think that it is a question of whether you can get this to work. After all, GM had a working fuel cell vehicle 60 some years ago. It is a question of whether you can make this work economically and by that I would mean at a lower cost than an equivalent diesel truck especially if you have to use "green" hydrogen. When I see Shell, BP and TotalEnergies, I have a tendency to think fossil fuel -- maybe they are planning on using "green" hydrogen or maybe they are just planning on "blue" hydrogen which is mostly a scam (or should I call it a shell game).

Anyway, Freightliner, which is a Daimler company in North America, is offering the Battery Electric eCascadia with a 350 km range but it does take 90 minutes to get a 80% charge. I am fairly sure this vehicle will have a total cost of operation less than that of an equivalent diesel truck. https://freightliner.com/trucks/ecascadia/

For shorter haul and lighter loads, you use batteries, no question about it, just as Daimler is.

But for longer haul and bigger loads, especially where there is swift turnaround or no return to base, everyone with the exception of the VW group have gone for hydrogen, and VW are hedging their bets.

I would disagree about blue hydrogen being inevitably a scam, although for sure there is substantial room for abuse, so it has to be watched carefully in each case.

And rising prices of fossil fuels mean that technology aside, in places like Europe and the far East the price gap of green hydrogen against fossil fuels is drastically reduced, even before technological improvement and economies of scale kick in.

Many years ago I was in cost and works accounting, and some future costs reductions can be calculated with a high degree of confidence - they are 'baked in the cake'.

Massive falls in the cost of green hydrogen are going to happen, far swifter than for batteries which are at a later point in the falling cost curve.

None of that means that where practical you don't fool around converting energy from one form to another, so you use batteries where you can, but it does mean that hydrogen, blue and green, can be a reasonably cost effective competitor with fossil fuels, aside from the benefit of not frying the planet.