Faraday Institution predicts demand for 10 UK gigafactories by 2040, each producing 20 GWh per year

In an update to a 2020 study, the Faraday Institution predicts that there will be demand for ten UK-based gigafactories (large, high volume battery manufacturing facilities) by 2040, each producing 20 GWh per year of batteries.

The transition to electrified transport is essential to meet Net Zero commitments; the combined electric vehicle automotive and battery ecosystem could be worth £22 billion (US$27 billion) by 2030 and £27 billion (US$33 billion) by 2040. Recent announcements in the UK by Britishvolt and Envision AESC have built excitement, particularly in the North East, about the potential to create a new, dynamic and highly skilled battery industry in the UK.

The report says, however, that while the UK is making progress it is not moving fast enough compared to its European competitors. UK battery manufacturing plants could reach a combined capacity of 57 GWh by 2030, equivalent to around 5% of total European GWh capacity, compared with 34% in Germany. 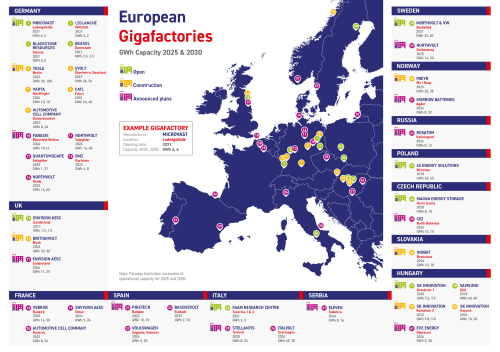 It is important that UK Government continues to communicate the attractiveness of the UK as a battery manufacturing location to investors, the Faraday Institution said. Alongside cultivating new investors, the government should also help to develop a resilient, sustainable and efficient supply chain, build up skills capability and commit to the long-term funding of battery research, particularly next generation batteries.

The UK needs to move quickly to secure investment in new gigafactories. By 2030, around 100 GWh of supply will be needed in the UK to satisfy the demand for batteries for private cars, commercial vehicles, heavy goods vehicles, buses, micromobility and grid storage. This demand is equivalent to five gigafactories, with each plant running at a capacity of 20 GWh per annum. By 2040, demand rises to nearly 200 GWh and the equivalent of ten gigafactories.

Key changes in assumptions and modeling in the Faraday Institution’s 2022 report relative to the 2020 study are:

The result of these key changes for the 2022 report relative to the 2020 study are: