Mercedes-Benz is aligning its global production network to manufacture its reshaped product portfolio focused on luxury electric vehicles as the brand prepares to go all electric by the end of the decade—wherever market conditions allow. The future product portfolio will focus on three categories: Top End Luxury, Core Luxury and Entry Luxury as outlined in the company’s Economics of Desire event on May 19.

Following the successful launches of Mercedes-EQ models in recent months, we are taking the next step: To outline the plan for our future production setup. Together with the employee representatives, we are consistently implementing the Mercedes-Benz strategy towards ‘electric only’. The global Mercedes Benz production network is sustainable, digital and flexible. We are ready for the rapid scaling of electric vehicle volumes—not least thanks to our highly qualified and motivated team worldwide. With the new production setup we are further increasing our flexibility and efficiency and securing the future of our locations.

—Jörg Burzer, Member of the Board of Management of Mercedes-Benz Group AG, Production and Supply Chain 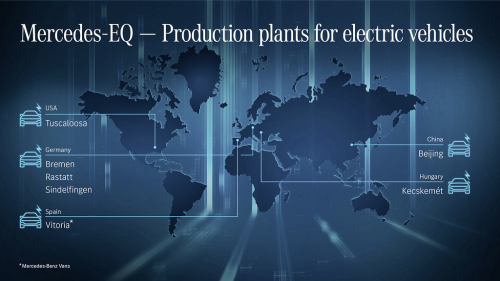 The Mercedes-Benz plants in Sindelfingen, Bremen, Rastatt and Kecskemét will start production of new models in the Top End Luxury, Core Luxury and Entry Luxury segments from the middle of the decade.

Battery systems will be supplied by the global Mercedes-Benz battery production network.

As part of implementing the Mercedes-Benz 2022-2026 Business Plan, the company is investing more than €2 billion into its European production sites.

The production portfolio already includes six all-electric Mercedes-EQ models. These roll off the production line at six locations on three continents and have been consistently integrated into ongoing series production.

Mercedes-Benz vehicle plants consistently implement electric production. Due to highly flexible structures, the plants of Mercedes-Benz AG can produce vehicles with different drivetrains on a single production line. With the strategic goal of shifting to all electric, the high degree of flexibility is a decisive advantage. It makes it possible to adjust production at short notice according to market demand.

Sindelfingen. Production of the all-electric EQS luxury sedan started last year at Factory 56 at the Mercedes-Benz plant in Sindelfingen. In Factory 56, the S-Class, the Mercedes-Maybach S-Class and the EQS are produced completely flexibly on the same line. 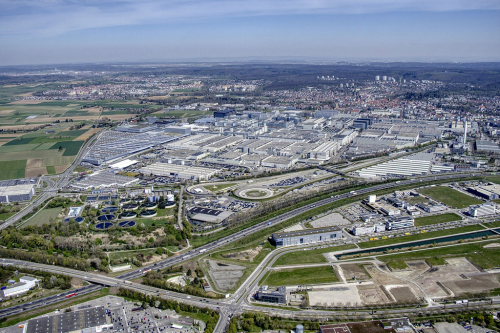 The Sindelfingen plant is also responsible for the production of the Mercedes-Benz E-Class with Sedan, Estate and All-Terrain off-road variants, CLS as well as the Mercedes-AMG GT family and will soon be adding the GLC to its portfolio. Sindelfingen is the lead plant in the Top End Luxury segment and will produce models based on the AMG.EA platform from 2025.

Bremen. The Mercedes-Benz plant in Bremen started production of the all-electric EQE a few months ago. Already in May 2019, the EQC (combined power consumption: 21.5 kWh/100 km) was integrated into ongoing series production at the Mercedes-Benz plant in northern Germany. In addition to the two all-electric models, the C-Class with Sedan, Estate, Coupe and Cabriolet, the E-Class with Coupe and Cabriolet, the GLC as well as the GLC Coupe and the AMG SL roll off the production line in Bremen. 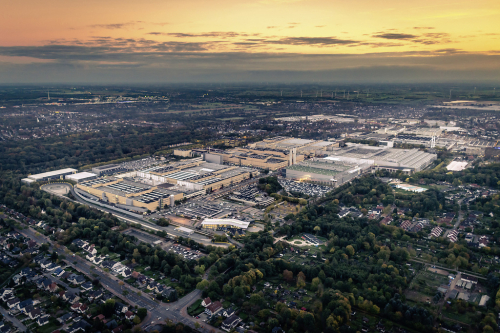 From the middle of the decade, a model based on the MB.EA platform will be integrated into production.

Rastatt. The Mercedes-Benz Rastatt plant has been producing the all-electric EQA compact model since 2021. The plant is also responsible for the production of the compact vehicles A-Class, B-Class and GLA with combustion engine and plug-in hybrid. 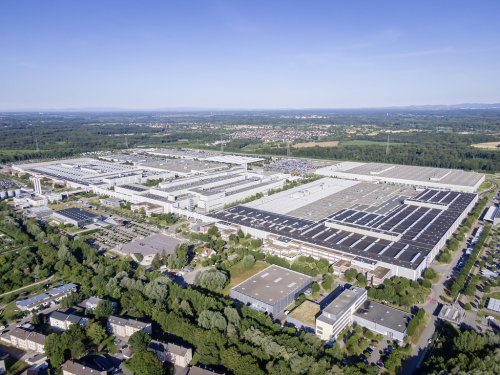 From 2024, new models based on the MMA platform are to roll off the production line at the plant. In the Entry Luxury segment, Mercedes-Benz will reduce the number of model variants from seven to four while significantly elevating the technological substance of these products. These changes help to reposition Mercedes-Benz in this segment to meet the wishes of discerning customers.

Kecskemét. The EQB compact SUV was launched at the Mercedes-Benz Kecskemét plant in 2021 and is the first purely electrically powered series production vehicle from Hungary. The model complements the portfolio consisting of CLA Coupe and CLA Shooting Brake as well as the A-Class with its conventional, plug-in hybrid and AMG versions. 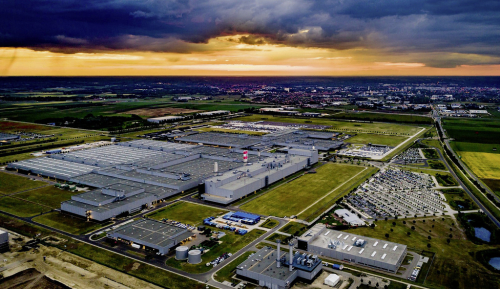 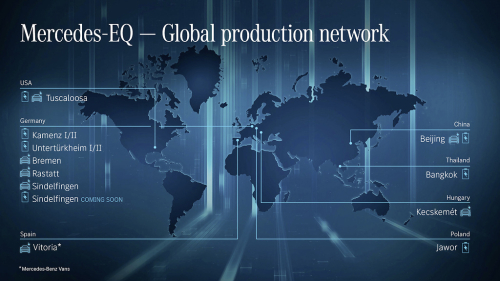 Tuscaloosa. The Mercedes-Benz plant in Tuscaloosa, USA, will soon start production of the EQS SUV, with the EQE SUV to follow later this year. Both models are produced on the same line together with the SUVs with conventional drive. The GLE, GLE Coupe, GLS and Mercedes-Maybach GLS roll off the assembly line in Tuscaloosa today.

Accumotive has been producing battery systems for hybrids and electric vehicles in Kamenz, Germany, since 2012. A second battery factory at the site commenced operations in 2018 and has been producing the battery systems for the EQC since 2019 followed by the batteries for the compact electric SUVs since 2021. Since Accumotive began production, more than one million batteries based on lithium-ion technology have been produced at the Kamenz site.

Also in 2019, Mercedes-Benz opened a battery production plant in Bangkok, Thailand, together with its local partner Thonburi Automotive Assembly Plant (TAAP). Battery systems for plug-in hybrids and all-electric vehicles are manufactured there.

The Mercedes-Benz battery factory in Jawor, Poland, has been producing plug-in hybrid batteries for the C-, E- and S-Class since 2020. In 2021, the site expanded its portfolio to include battery systems for the compact Mercedes EQA and EQB models.

Two factories as parts of the Untertürkheim site in Stuttgart, Germany, produce battery systems. The Hedelfingen plant has been producing batteries for the EQS and EQE since 2021. A few weeks ago, the production of plug-in hybrid batteries started in the Brühl plant, which will be used in the new GLC, among other things.

The Mercedes-Benz battery production network will also be supplemented by another battery factory at the Sindelfingen site.

Another important step is the acquisition of UK based electric motor company YASA. With this deal, Mercedes-Benz gains access to unique axial flux motor technology and expertise to develop next generation ultra-high performance motors. The Mercedes-Benz Berlin plant will expand its production portfolio with the manufacture and assembly of these ultra-high-performance axial flow electric motors in the future.

Sustainability in production. Compared to 2020, Mercedes-Benz is pursuing the goal of at least halving CO₂ emissions per passenger car over the entire life cycle by the end of this decade. The most important levers for this are the electrification of the vehicle fleet, charging with green electricity, the improvement of battery technology and the comprehensive use of recycled materials including batteries and renewable energies in production.

Mercedes-Benz has been producing CO2-neutral in all of its own plants worldwide since this year and has also been purchasing electricity in Germany that comes exclusively from renewable sources (CO2-free) since this year. A green electricity supply contract ensures the purchase of electricity from renewable energies at all times. In addition, the company aims to increase the production of renewable energy at its sites. Solar plants with a capacity of more than 11 MWp are to go into operation by the end of next year. By 2025, Mercedes-Benz will invest a three-digit million sum in the installation of photovoltaic systems. Mercedes-Benz is also planning to invest in new power purchase agreements for wind turbines worth €1 billion by the middle of the decade.

By 2030, it is planned to cover more than 70% of the energy demand in production from renewable energy sources—15 percent is to be generated by renewable energy at the company’s own locations. This is to be achieved by expanding solar and wind energy at its own locations and by concluding further corresponding power purchase agreements. Mercedes-Benz is also pursuing the goal of reducing water consumption by 35% by 2030.

In the next step, Mercedes-Benz also wants to make logistics CO2-neutral. The rail transport of vehicles and components such as batteries play an important role here.