The serial production of the BMW i3 has ended, some eight and a half years after it was launched. The BMW i3 (combined power consumption: 16.3 - 15.3 kWh/100 km according to WLTP, 13.1 - 14.0 kWh/100 km according to NEDC) started out as a somewhat exotic specimen on the nascent market for electric vehicles, developed into a classic with unmistakable charisma already in the course of its production period and goes down in the company’s history as a pioneer of sustainable mobility.

For the BMW Group Plant Leipzig, the farewell to the BMW i3 is linked to the start of a new chapter in electric mobility. In a seamless transition, further e-drive components will be manufactured there with immediate effect in addition to producing high-voltage battery modules, which is already being done since May 2021.

Next year, the next generation of the MINI Countryman will be manufactured at the same location—with a fully electric drive, among other things. In this way, the electric mobility expertise of the workforce, which has been built up over the past years, will be used and advanced further. At the same time, the BMW Group Plant Leipzig becomes the first location in the company’s global production network where BMW and MINI models are manufactured together. 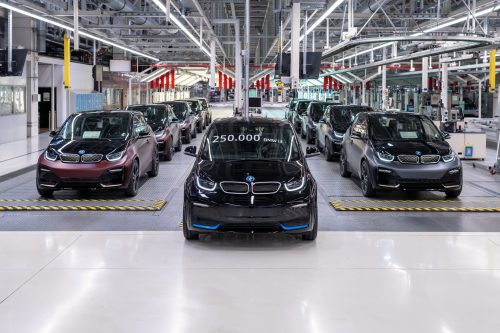 Just a few days ago, the 250,000 unit of the compact e-vehicle was produced in Leipzig. This makes the BMW i3 the world’s most successful electric vehicle in the premium compact segment. The BMW i3 has been sold in more than 74 countries around the world. In many markets, it achieved a significantly higher market share in the electric vehicle segment than the BMW brand in the area of conventionally powered cars. It also succeeded in inspiring additional target groups in the premium mobility offers from BMW. In the early years, more than 80% of all BMW i3 buyers were new customers for the BMW Group.

The BMW i3’s independent vehicle architecture consists of a drive module as an aluminum chassis, which carries the e-drive, the suspension and the high-voltage battery as well as a passenger cell made of carbon fiber-reinforced plastic (CFRP) called the life module. This design, developed from the outset for pure e-mobility, made possible a particularly generous amount of space in the interior and a cockpit and center console design.

With its model-specific technology developments, the BMW i3 has also become an innovation driver for the BMW and MINI brands in numerous other areas. The 135 kW/184 hp electric motor of the BMW i3s (power consumption combined: 16.6 - 16.3 kWh/100 km according to WLTP, 14.6 - 14.0 kWh/100 km according to NEDC,) has been delivering urban driving fun and locally emission-free go-kart feeling in MINI style since 2020.

Originally developed for the BMW i3, the fifth generation of BMW eDrive technology is now being produced. It is used in numerous purely electric and plug-in hybrid models from BMW and MINI.

In addition to the all-electric drive, the BMW i3’s eco-balance also stems from the choice of materials, which is fully geared towards sustainability and resource-conserving production. It was the first BMW Group model to receive an ISO certificate issued by independent auditors at the time of its market launch, confirming its optimized environmental performance throughout its entire life cycle.

Partly recycled raw materials are used for its outer skin made of thermoplastics. The plastic used in the interior is made of 25% recycled material. The textiles used for the seat surfaces are made entirely from recycled fibers. The door panels of the BMW i3 are made of kenaf fibers. Eucalyptus wood from certified cultivation in Europe serves as the raw material for parts of the instrument panel.

The holistic concept for sustainability also includes the extensive use of renewable energy in the production of the BMW i3. Four wind turbines on the site of the BMW Group plant in Leipzig supply the electricity needed for its production. At an early stage, these made the Saxon location a pioneer for CO2-neutral vehicle production, which has been standard in all BMW Group plants around the world since last year.

The BMW i3’s high-voltage battery has undergone continuous development since its market launch, doubling its storage capacity while retaining the same installation space. With a cell capacity of 120 ampere hours (Ah) and a gross energy content of 42.2 kilowatt hours (kWh), it now enables ranges of up to 307 kilometers (191 miles) according to WLTP.

The high-voltage batteries developed and produced by the BMW Group are used in other areas as well. Examples of this are the Streetscooter vans used by the German postal service and the city buses of the Turkish manufacturer Karsan, as well as motorboats with electric drives of the Torqeedo brand, for which they also serve as a source of energy.

In addition, BMW i high-voltage batteries are used as stationary energy storage systems for electricity generated from renewable sources such as wind or solar power. The BMW Group plant in Leipzig also has such an energy storage farm. It consists of 700 interconnected BMW i3 high-voltage batteries in which the electricity generated by the four wind turbines on the plant site can be stored.