HyMethShip seeks to fuel ship engines with hydrogen from methanol

The EU-funded HyMethShip project developed a system that innovatively combined a membrane reactor, a CO2 capture system, a storage system for CO2 and methanol as well as a hydrogen-fueled combustion engine to power ships. 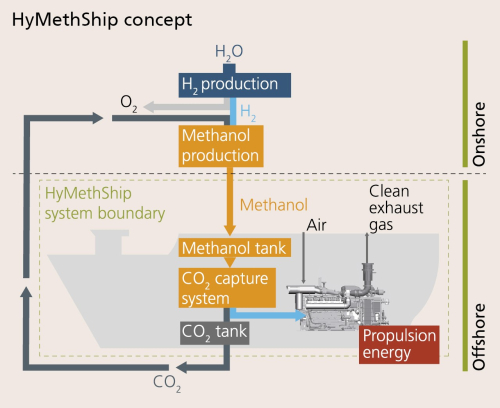 According to the European Environment Agency (EEA), maritime transport is responsible for more than 3% of the total carbon emissions in the European Union. In 2019 alone, emissions reached 144 million tonnes of CO2. Shipping has been one of the fastest-growing sources of greenhouse gas emissions for many years now due to the sharp rise in the trade volume. As a result, shipbuilders and operators around the world are seeking environmentally friendly alternatives to conventional ship engines powered by fuel oil or diesel.

In the HyMethShip project, researchers at the Fraunhofer Institute for Ceramic Technologies and Systems IKTS worked with a number of partners. The Large Engines Competence Center (LEC) in Graz, Austria, was responsible for the overall coordination of the project, while the startup SES-HyDepot e.U. in Innsbruck operated the small-scale testing facility to validate the underlying technical process.

In this concept, the ship is refueled with methanol at port. On board, hydrogen is obtained from the methanol through a steam reforming process and is used for ship propulsion.

The system’s technical centerpiece is the reactor. The methanol is mixed with water, then evaporated by applying heat and fed into the preheated reactor, where the mix of methanol and water is converted into hydrogen and CO2. 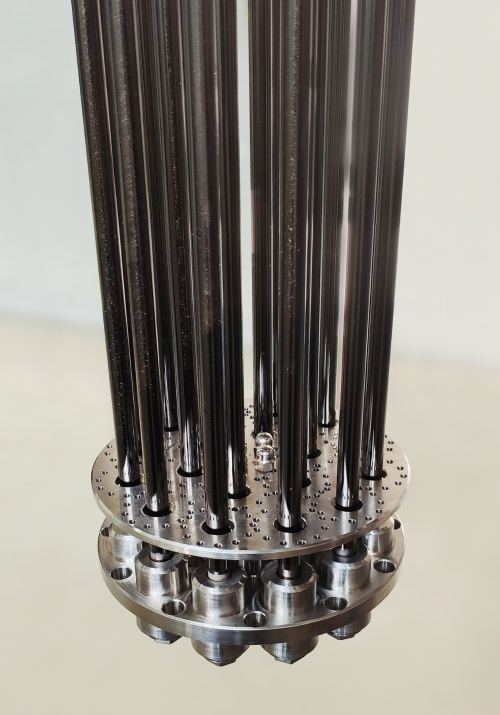 The integrated membranes in the module for a reactor separate the hydrogen from the carbon dioxide. © Fraunhofer

When it comes to hydrogen separation and reactor engineering, Fraunhofer IKTS is able to contribute its many years of experience in membrane process technology. The researchers at Fraunhofer developed a ceramic membrane coated with carbon. The hydrogen molecules escape through the extremely fine pores of the membrane, while the larger carbon dioxide gas molecules are retained. In this process, the hydrogen achieves a purity level of more than 90%.

It is then fed into the engine, which it drives by burning in a conventional combustion engine and generates absolutely no exhaust gases that are harmful to the climate.

The process concept used in the project includes two additional design elements that optimize the system. First, the waste heat from the engine is used to heat the reactor, significantly increasing the efficiency of the system. Second, the remaining carbon dioxide is returned to a fluid state downstream of the reactor and fed into the empty methanol tanks. When the ship arrives at port, the CO2 is fed into tanks and can then be used for the next methanol synthesis process.

Methanol is an ideal hydrogen carrier for shipping. Its energy density is twice as high as liquid hydrogen, so the on-board methanol tanks only need to be half the size. It can also be transported safely: Even if a tank leaks, there is no acute environmental risk.

During development, one of the technical challenges was enlarging the ceramic membranes so that they could be used in the context of the propulsion required for ship engines. The researchers managed to scale the membrane from its original length of just 105 mm to 500 mm, enabling engine propulsion of up to 1 MW. The medium-term goal is to develop propulsion systems of 20 MW and above.

A zero-emission propulsion system would be ideal for ferries that sail fixed routes between two ports, with each port having its own methanol filling station. However, the technology may also be an appealing future solution for container ships and cruise ships.

Why not just run it on Methanol directly ?
Much less fuss, more CO2, but probably better than diesel or bunker fuel.

According to the HyMethShip Project;
“Due to the methanol reformation the fuel energy available for engine combustion is higher than the methanol energy content that could be used for direct methanol combustion.”
Also:
“During the reforming process thermal dissociation of water at high process temperatures inside the membrane reformer produces additional hydrogen molecules, re- sulting in a surplus energy of more than 12 percentage points: CH3OH + H2O→CO2 + 3 H2”
Reference:
https://www.hymethship.com/wp-content/uploads/2021/02/Wermuth-et-al-The-HyMethShip-Project-Authors-manuskript-17th-FAD-Dresden.pdf
The current testbed engine is an INNIO Jenbacher J612 engine which has been converted for Hydrogen combustion.

Use the carbon dioxide to make more fuels

Good to see someone addressing the problem after ignoring it for decades; We can't remove bunker fuel from the environment soon enough. Any other fuel would be a welcomed step up.

My question would be how the economics and energy efficiency compare with using ammonia? You still need to make the hydrogen but there is no carbon dioxide to recover and store.

It takes more energy to make ammonia and it's more toxic, they capture the CO2 here.

Now that we have a practical method for photosynthesis catalyzing of methane to methanol (if not at the wellhead, then presumably at the field level),

there is nothing to hold back its universal use to power ships - one standard fuel.

Methane is a powerful GHG easily mishandled at the source and in fact it is currently a byproduct of oil mining that is flared off at the pump head as another GHG, CO2; The less of two evils since methane is about 24 times more destructive to the atmosphere.

This article is about methanOL, Lad.  It breaks down very quickly in the environment.

I am skeptical about onboard CO2 capture. Wouldn't it be cheaper to just take the CO2 from the air when synthesizing the fuel? You avoid the cost of onboard capturing and transporting the CO2 back.
Also skeptical about the use of fuel cells when you have methanol as fuel and need to generate several MW of power. At those capacities, you have many options with efficiencies higher than 50% which are potentially cheaper and more robust. Like diesel engines, combined cycles, or experimental setups like humid air turbines or super critical CO2 cycles.

I am skeptical about onboard CO2 capture.

I'm not.  I've thought about this too.


Wouldn't it be cheaper to just take the CO2 from the air when synthesizing the fuel?

Atmospheric air capture is costly in energy and equipment.  If you only have to pay for this once per vehicle, you save a lot of energy.


You avoid the cost of onboard capturing and transporting the CO2 back.

Notice that this scheme requires water too, but the water isn't held and returned to base.  Water is freely available to a boat, even if you have to desalinate it.  CO2 is a bit over 1/2500th of the atmosphere.  Very different thing.


Also skeptical about the use of fuel cells when you have methanol as fuel and need to generate several MW of power.

The article talks about engines, precisely because the engine exhaust is hot enough to drive the methanol decomposition and reverse water-gas shift reactions (for which you need steam at about 250°C).

Excellent Points.
I posted “ The current testbed engine is an INNIO Jenbacher J612 engine ”. This is an ICE similar to engines in use in almost all ships.
The International Maritime Organization has already recognized Methanol as a clean marine fuel much better than Bunker Oil with low NOx and SOx emissions.
The Stena Germanica was the first major marine vessel to run on recycled methanol.
Maersk is ordering eight large, ocean-going vessels able to run on what it called “carbon neutral methanol.”
And as Dr. Jäger, IKTS said : “Methanol is an ideal hydrogen carrier for shipping. Its energy density is twice as high as liquid hydrogen,” i.e Volumetric Density.
So the HyMetShip Project definite looks like it has goals that can be implemented in the near future.

Removing CO2 directly from the air requires almost as many joules
as those produced by burning the fossil fuel in the first place
https://www.rechargenews.com/energy-transition/the-amount-of-energy-required-by-direct-air-carbon-capture-proves-it-is-an-exercise-in-futility/2-1-1067588

Certainly there is a high energy cost involved in current methods for capturing CO2 from the air.

Your link however goes way to far, and moves from rational assessment to polemic in describing it as an 'exercise in futility'

For starters there are all sorts of mitigation strategies even using roughly current technology, notably in by capturing the far more concentrated streams of CO2 from industrial processes etc, as it does not matter where the CO2 is located, and using industrial process heat otherwise vented to reduce the energy burden.

But there is also nothing inherent in the very high energy cost, although we don't have the technologies currently to hand. So:

The HyMethShip Project has nothing to do with “Direct Air Carbon Capture”.

The Project was completed in December, 2021.
Next steps include developing a full-scale vessel application, which would be tested and trialled on board a ship.
“At present, potential scenarios are being worked out with several consortia, with the concrete target for the maiden voyage planned for 2025/2026.”
https://cordis.europa.eu/article/id/436378-hydrogen-based-innovation-could-help-shipping-go-green

"Wouldn't it be cheaper to just take the CO2 from the air .."
There is the relevance in this discussion