A study by researchers in Australia and China has determined that global food-miles account for nearly 20% of total food-systems emissions; moving fruit and vegetables in refrigerated vehicles is particularly emissions-intensive. Their paper appears in the journal Nature Food.

Food trade plays a key role in achieving global food security. With a growing consumer demand for diverse food products, transportation has emerged as a key link in food supply chains. We estimate the carbon footprint of food-miles by using a global multi-region accounting framework. We calculate food-miles based on the countries and sectors of origin and the destination countries, and distinguish the relevant international and domestic transport distances and commodity masses.

When the entire upstream food supply chain is considered, global food-miles correspond to about 3.0 GtCO2e (3.5–7.5 times higher than previously estimated), indicating that transport accounts for about 19% of total food-system emissions (stemming from transport, production and land-use change). Global freight transport associated with vegetable and fruit consumption contributes 36% of food-miles emissions—almost twice the amount of greenhouse gases released during their production.

To mitigate the environmental impact of food, a shift towards plant-based foods must be coupled with more locally produced items, mainly in affluent countries.

Clearing land for farming, raising livestock and moving food to and from shops adds a large amount of greenhouse gas to the atmosphere. The United Nations estimates that growing, processing and packaging food accounts for one-third of all greenhouse-gas emissions.

The complexity of the food system has made it challenging to measure how much carbon dioxide in the atmosphere is a direct result of the system’s emissions, particularly those from transportation. Previously, most studies underestimated emissions because they focused on only those generated by moving a single product to and from the shop. This method tends to miss the multitude of other trucks, ships and aeroplanes involved in gathering all the ingredients needed to make the bar in the first place, says first author Mengyu Li, of The University of Sydney.

The researchers gathered data from 74 countries and regions, and looked at where the food came from, where it went and how it moved from one place to the next. They found that, in 2017, food transportation added emissions equivalent to 3.0 gigatonnes of CO2 to the atmosphere, up to 7.5 times what was previously estimated. 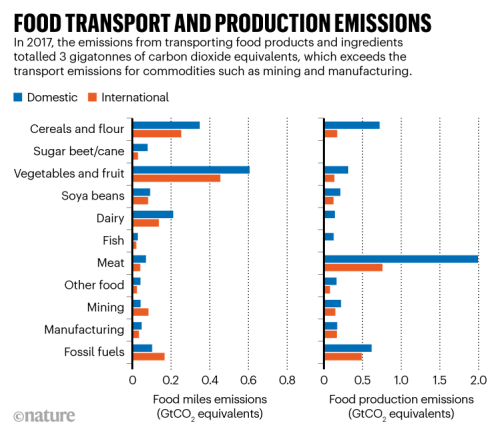 Wealthy nations are more likely to import food from around the world. They also use refrigeration—which is extremely carbon-intensive—when moving fresh fruit and vegetables. Moving fruit and vegetables generated twice the amount of CO2 produced by growing them.