Among the technologies displayed at 2022 GAC Tech day at the GAC R&D Center was a new-generation LFP battery built on microcrystalline technology (SmLFP). Compared with the current mass-produced lithium iron phosphate batteries on the market, the super-energy lithium iron battery has an increase of 13.5% in mass energy density, 20% in volume energy density, about 10% in low temperature capacity at -20°C, and a fast charge of more than 2C.

The life of the battery can reach more than 1.5 million kilometers (>4000 weeks @ 80%)—effectively solving the technical problem of a “balanced performance” lithium battery.

Aside from the SmLFP technology, GAC Group displayed its Mega Waves Hybrid Modular Architecture (originally announced in April) and unveiled its 1.5L hydrogen-fueled engine for the first time, positioned as an element in the hybrid system. 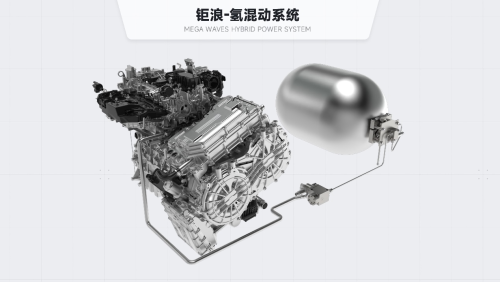 The GMC electromechanical coupling system offers high efficiency, high performance and high integration, and is compatible with all XEV models. This year, GAC Trumpchi will launch a flagship MPV model equipped with high-torque GMC, with a pure electric cruising range of more than 100km and a comprehensive system power of 270 kW.

A new and improved ADiGO Ecosystem, now expanded to include a smart cockpit solution in addition to driving assistance technologies, was also unveiled. The ADiGO SPACE Intelligent Cockpit System features an intelligent voice assistant that responds in less than 0.6 seconds, and top-notch sound system with up-to-date infotainment content.

If i buy a hydrogen car in 2030 i will prefer an ice hydrogen over a fuelcell because of cost. Till then im anxiously waiting for a hit.

Note how there is no mention of the NOx emissions from the GAC hydrogen-fueled internal combustion engine.

H2 burns much hotter than gasoline, diesel or natural gas in any engine. So without some fancy engineering & performance validation testing, and/or a diesel-derived catalytic converter with AdBlue or other reductant for emissions control, this ICE engine will not be allowed in any Western country.

Hydrogen can burn extremely lean.  With a sufficiently lean mixture, the flame temperature is too low to form NOx.

@KeithDPatch This place is a clubhouse for hydrogen fanboys

Always has been full of H2 fans.
There are applications where H2 makes sense, E.g, aircraft and sea ships...not so much ground vehicles where BEVs make more sense, especially since Tesla has shown the way and taken BEVs out of the academic prediction circles into the real World.

Fuel cells are probably more efficient, but for peak loads as a big truck range extender this could be useful.