Three years ago, ESWE Verkehr in Wiesbaden placed its first major order for 56 all-electric Mercedes-Benz eCitaro city buses. In all, 120 electric buses have now been ordered. The 100th eCitaro from this overall package has now been delivered. 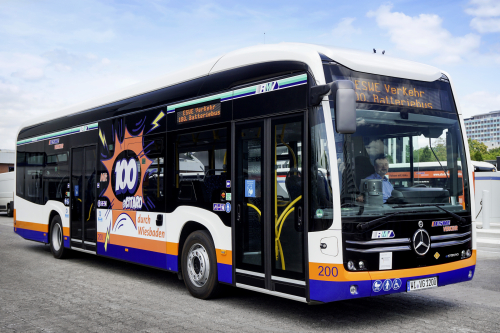 The anniversary bus is an eCitaro as a two-door solo bus and is part of the second delivery batch. The solid-state batteries offer 441 kWh of capacity, allowing a long range even in demanding topography. In Wiesbaden, certified and sustainable green electricity is generally used to charge the battery-driven buses.

The mobility service provider was the first transportation company in Germany to order an overall system consisting of city buses along with an entire infrastructure: The eCitaro buses themselves, replanning and reconstruction of the depot, fitting with charging station overlays, building the transformer station to convert electricity from medium to low voltage, and the installation of wiring on site.

Charging management was also part of the order. This will be provided in collaboration with Daimler Buses partner company IVU Traffic Technologies from Berlin. IPPC is a recognized specialist for customized IT solutions.

Daimler Buses took over the general contractorship so that the Hessians could then receive their e‑mobility solution from a single source. Three years ago it still represented a pioneering achievement. Now the flagship project has matured and been implemented by Daimler Buses in various forms with other companies.

The Wiesbaden-based mobility service provider ESWE Verkehr operates local public transport in the capital of Hesse with more than 290 buses. They run on 43 routes, carrying more than 61 million passengers a year. Of the approximately 1100 employees, two thirds work as drivers. The company’s fleet is largely made up of the Mercedes Benz Citaro. With the introduction of the eCitaro, ESWE Verkehr is implementing an ambitious plan: Within just three years, the company has converted more than a third of its bus fleet to fully electric vehicles.