Tüpraş and Honeywell sign licensing agreement for the use of Honeywell UOP Ecofining technology; renewable diesel and SAF

Honeywell announced that Turkish refiner Tüpraş will license Honeywell UOP Ecofining technology to produce biofuels from feedstocks such as used cooking oil and waste animal fat at their refinery in Izmir, Türkiye. The new Ecofining plant is being designed to convert approximately 8,300 barrels per day of waste feeds/feedstocks to SAF, renewable diesel, and other products.

SAF and renewable diesel have similar molecules to petroleum-based diesel and jet fuels and can be used as a drop-in replacement without engine modifications. In the case of SAF, it can be used in blends of up to 50% with the remainder as conventional (fossil based) jet fuel. Apart from SAF, Bio-naphtha and Bio-LPG are used in the production of plastics, specifically olefins that are building blocks for other chemicals and aromatics used to produce polyester and other packaging materials.

Depending on feedstock choice, renewable diesel and SAF, which are produced from the Ecofining process, are expected to result in a significant reduction in lifecycle greenhouse gas emissions compared to conventional diesel or aviation fuel from petroleum. Honeywell is an early pioneer in SAF production with its Ecofining technology, which has been used to produce SAF commercially since 2016.

As Tüpraş, we have set out to become carbon-neutral by 2050, as we expand into new sustainable business areas. A large portion of our investments will be allocated to new energy sources such as sustainable aviation fuels, green hydrogen and zero-carbon electricity. Biofuels will play a major role in the decarbonization of the industry. We aim to process 400,000 tons of bio feedstock by 2030, and triple our sustainable aviation fuel production capacity by 2035. We plan to become the largest SAF supplier in our country. In line with our future roadmap, Tüpraş selected Honeywell Ecofining technology to produce sustainable aviation fuel from plant and animal-based waste feedstocks because it produces high yields of high-value renewable products.

Based in Izmir, Izmit, Kirikkale and Batman, Tüpraş is the first producer in the refining sector in Türkiye, and the largest industrial enterprise in the country. This makes it the 7th largest in Europe, operating four oil refineries with a total of 30 million tons of annual crude oil processing capacity.

Tüpraş is also among the few refiners in the Mediterranean region with a high complexity—an average Nelson Complexity Index (a measure of the sophistication of an oil refinery) of 9.5. The company launched its Carbon Neutrality Target by 2050 as part of its strategic transformation plan, focusing on four business areas: sustainable refining, zero-carbon electricity, green hydrogen, and biofuels. 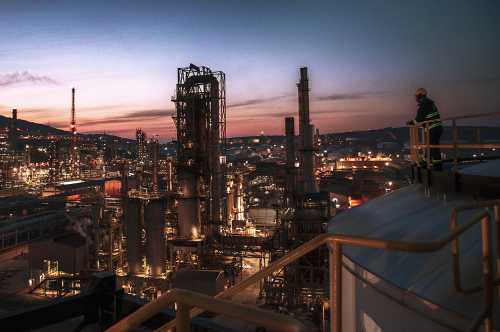 With the aim of meeting Turkey’s growing requirement for petroleum product, İzmir Refinery was brought intro operation in 1972. The refinery, which started production with an annual crude oil processing capacity of 3 million tons is now registered as having an annual refining capacity of 11.9 million tons following significant capacity increases and unit modernizations carried out over the years.

The İzmir refinery, which has a Nelson Complexity Index of 7.66, is the only refinery in Turkey to have a machine oil production complex, with a 400,000 tons/year capacity.