The German energy company EWE and its subsidiary swb AG have awarded the contract for the construction of an electrolysis plant for decarbonization of the ArcelorMittal steelworks in Bremen to the APEX Group in Rostock/Laage. The project name HyBit stands for “Hydrogen for Bremen’s industrial transformation” and marks the start of the decarbonization of steel production in Bremen, Germany. (Earlier post.)

HyBit is a joint project of EWE, swb AG and ArcelorMittal Bremen. The project costs will amount to approximately €20 million, with €10 million coming from the state of Bremen.

The APEX Group will be the heart of the project—a 10 MW electrolysis plant for hydrogen production. The aim is to produce green hydrogen at the swb AG power plant site in Bremen Mittelsbüren that will be used for pig iron production and processing at Arcelor Mittal’s steel mill, as well as for future mobility applications. The plant is scheduled to be fully functional in 2024. 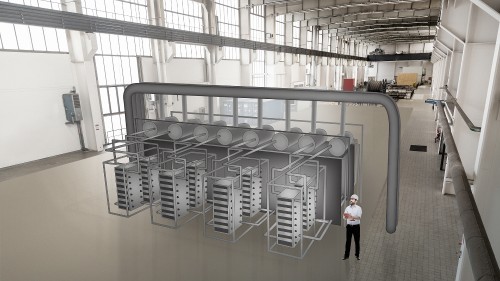 The construction of the electrolysis plant marks the starting point for the use of green hydrogen in steel production in Bremen and will become an important building block in the decarbonization of steel production at ArcelorMittal Bremen. We will use the first hydrogen in the existing facilities. Following in the next stages with the use of new production technologies, it will enable us to be producing climate-neutral steel in Bremen by the mid-30s.

—Reiner Blaschek, Chairman of the Management Board of ArcelorMittal Bremen

The HyBit project shows the great benefits that hydrogen has with regard to climate protection, also or especially in industrial applications. With our Clean Hydrogen Coastline initiative and the associated construction of large electrolyzers and the conversion of cavern storage and pipelines to hydrogen, we are already preparing the next big step towards a large-scale hydrogen economy.

The plan is eventually to scale the electrolyzer plant to 300 MW. In combination, an electric scrap melting plant is to be integrated first in order to further reduce CO2 emissions by increasing the scrap content in pig iron.

In a new direct reduction system, ArcelorMittal wants to produce green DRI with the DRIBE project (DRI Usage in Bremen EAF), which is to be processed climate-neutrally into steel in an electric arc furnace (EAF) to be built. The DRI plant in Bremen will also supply the Eisenhüttenstadt location at the beginning.

The plant is one of the largest of its kind in the world. It has an annual capacity of two million tonnes of HBI, which is a premium, compacted form of Direct Reduced Iron (DRI) developed to overcome issues associated with shipping and handling DRI.

The transaction enhances ArcelorMittal’s ability to produce the high-quality input materials required for low-carbon emissions steelmaking, and reinforces the company’s position as a world leader in DRI production.

ArcelorMittal intends to lead the decarbonization of the global steel industry.

Currently, the process of making steel using coke is a large contributor to greenhouse gases and direct reduction using "green" hydrogen is a proven technique for reducing these greenhouse gases. However, the question is where is the electric power coming from? Before someone states that they are going to use renewable power, I would point out that Germany, which had been using Russian natural gas for a considerable amount of their electric power is now short of electric power and are looking at restarting some coal fired power plants. They could do something smart and restart some of their nuclear power plants and use both the heat and electricity for more efficiency high temperature electrolysis but for some reason, the politics seem to prevent this. Anyway, until they really have enough "green" electric power so that they do not need to burn coal or peat or imported wood pellets, it would seem to be more efficient to just continue to use coke for making iron or use natural gas instead of hydrogen for direct reduction if they can find enough natural gas. Using wind or solar power for the production of hydrogen when there is not enough clean electric power to start with see ms to be an inefficient waste.

Sixteen years of Mrs. Merkel in office as Chancellor of Germany were 16 years of stagnation. Wise politicians are also oriented on visionary progress what cannot be stated for Mrs. Merkel; she didn't act progressively, she reacted passively. Her first term in office, titled as the first great coalition, was enhanced in the effort to suppress the advancement of renewables where- and however possible; this was accomplished solely to pacify the interests of the German power utilities. In this aspect, her crowning ceremony were the negotiations with the Russian dictator regulating the supply of NG to Germany / Europe. The result of this asinine action is known all to clearly to everyone worldwide.
The pace, at which the renewables were advancing in the 1990s, was utterly dismaying to the German power utilities. Had the REs been given the chance to develop unimpeded, there would be no energy problems in Germany today; and that, without coal and fission.

Whatever you're smoking, yoatmon, it's good... but lay off it when you're proposing policy.  The inherent unreliability of "REs" (excluding reservoir-fed hydro) makes them unfit for the purpose of powering a 24/7/365 electric grid by themselves.  Last year's European "wind drought" which led to depletion of NG reserves at the very time they should have been filling up is enough to prove that.

Grid reliability can only be provided with large stockpiles of stored energy; in a word, fuel.  If you can't put it in your pocket, it isn't fuel.  You can't put wind and sun in your pocket.  They can offset the consumption of fuel, but they are not fuels themselves.

German policy has been to ignore the stored energy issue, to the point of making existing pumped-hydro storage plants go out of business.  The "environmental fee" (only imposed on small users) used to pay out-of-market compensation to "renewables" has done nothing for the reliability issue.  This has gotten to the point where Germany's neighbors have been considering the installation of phase-shifting transformers to halt the dumping of excess "RE" onto their grids, forcing their own generators to provide balancing without compensation.  Germany has been getting away with this so far, but the very existence of these problems proves conclusively that any attempt by the rest of the continent to go the German route would lead to catastrophe and collapse in very short order.

It's time to face facts.  https://roadmaptonowhere.com/

After the innumerate have held back decarbonisation by decades through opposition to nuclear power, we now still have mass producible molten salt reactors which, technically, could be turned out incredibly rapidly and cheaply elimination Russia's stranglehold:

I can't really listen to Brian Wang, who is not a great video performer, but looked through the links to Seaborg and Thorcon.

Essentially all that is holding them back now is authorisation, and ludicrous regulation.

The anti nuclear crowd have succeeded for decades in putting in some of the worst and most onerous criteria, for anything which has the label 'nuclear' , even though the molten salt designs are, as of course you know, inherently safe.

Solving any energy issues takes, essentially, a stroke of the pen, to exempt inherently safe nuclear from regulations designed, and massively over designed, to cope with reactors needing active management to stay safe.

One of the mods on r/nuclear says that MSRs have greater safety issues when in shutdown than when operating, and he's probably right... but compared to large water-cooled reactors, MSRs do appear to have far fewer failure modes.

I have had a look at r/nuclear, but could not spot the argument or the mod you are referring too, so I have no idea how seriously to take the alleged safety issues when shutdown.

I did however see your own comment more generally on molten salt reactors, which I agree with 100%:

' Ye gods, the sheer DISHONESTY of these people! They claim the MSRE was a failure, and link to a document about a never-built molten salt BREEDER reactor. Here's what the document has to say about the MSRE (emphasis added):

MSRE - The Reference Pointi for Current Technology
The Molten Salt Reactor Experiment (MSRE) was begun in 1960 at ORNL as part of the Civilian Nuclear Power Program. The purpose of the experiment was to demonstrate the basic feasibility of molten salt power reactors. All objectives of the experiment were achieved during its successful operation from June 1965 to December 1969. These included the distinction of becoming the first reactor to operate solely on U-233. Some of the more significant dates and statistics pertinent to the MSRE are given in Table II.'

In present circumstances it would be entirely possible, in so far as I know from information to hand, to institute a Liberty ship style program to mass produce reactors if the program were pushed through with the same urgency, and some level of risk accepted, likely to be less in my view than the risks entailed in not dealing fast with the energy crunch and possible conflict arising from it, including nuclear.

That is however a non-expert opinion, and I certainly have no full information on what the issues are.