A recently completed resource report has validated Galvanic Energy’s Smackover prospect as one of the largest lithium brine resources in North America, with sufficient lithium to produce enough batteries for 50 million electric vehicles.

Oklahoma-based Galvanic Energy is a geoscience-driven resource exploration company that employs innovative, proprietary discovery methods to identify natural resources essential to the US renewable energy sector. Over the past year the company has completed well testing and detailed reservoir modeling to significantly advance its 120,000-acre lithium prospect in southern Arkansas.

The lithium resource estimate is substantial given that the USGS currently estimates the US lithium reserve at 750,000 tons and a total inferred resource of 9.1 million tons, including “oilfield brines” such as the Smackover.

Strategically located in the south-central US near newly built or planned EV and battery manufacturing plants, Galvanic Energy’s lithium prospect could greatly reduce US reliance on foreign supply chains. Additionally, the prospect can be developed using a low-environmental footprint ion extraction process. 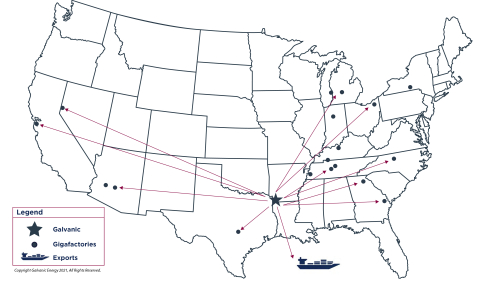 To that end, Galvanic Energy has been evaluating multiple direct lithium extraction (DLE) technology providers to determine which of those processes is best suitable for developing this world-class lithium asset. Galvanic’s Smackover prospect will support a domestic supply chain for lithium batteries required in electric vehicles, portable electronics and power storage systems.

See what you can find once you start looking and something has a greater value. Maybe we will not be so dependent on China after all.

Getting capital here can be difficult their government helps them