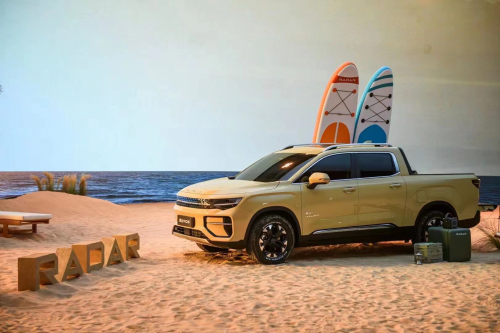 The Radar brand is launched as an independent brand within the wider Geely Holding Group which will give the brand considerable access to full vehicle technologies and shared components for electric vehicles.

Radar Auto is a fully capable independent brand with its own R&D facility in Hangzhou and a fully equipped EV production facility in Zibo, Shandong, from which it will begin production and deliveries of the Radar RD6 in the fourth quarter of 2022.

Radar is developing a full portfolio of electric lifestyle vehicles that will include pick-up trucks and SUVs as well as ATVs and other lifestyle products.

Geely Holding has appointed Dr. Ling Shi Quan as the CEO of Radar Auto. Dr. Ling is a veteran engineering lead at Geely Auto Group and has taken responsibility for several major milestone projects for the Geely Auto Group of brands including Lynk & Co and Geely Auto.

The Radar RD6 is based on the Sustainable Experience Architecture (SEA), which will give the RD6 considerable technology underpinnings that will include single and dual motor options. Performance figures and range will be announced later.

Due to the use of SEA, space has been maximized considerably, allowing for a ‘front trunk’(frunk) under the hood as well as a truck bed that offers external charging facilities.

Engaging closely with users, RADAR is also introducing a lifestyle sub-brand, Radar Weekends that focuses on outdoor lifestyles and will cooperate with different partners to create a fun, diverse outdoors ecosystem. Radar Weekends will work with the camping equipment brand NatureHike to develop a variety of outdoor camping accessories for the brand’s vehicles. In addition, Radar has also partnered with National Geographic China for a program to Protect Nature’s Wonders which promotes the concept of leaving no trace behind when adventuring outdoors.

This could be a big seller!
Geely, the 14th largest auto manufacturer you may not know about, has many global brands already, including: Volvo, Polestar, Lotus, London Electric Vehicle Company (LEVC), smart, 9.7% of Daimler, Lynk & Co, Geometry, Zhidou, Maple, Farzion and Proton.
The Radar RD6 will be built on the SEA Platform. The SEA Platform supports 1-3 electric motors and a range extender. The SEA Chief Engineer claims a total range of around 1,000 km with a 40 kWh battery and a 40 litre fuel tank with the range extender in place.
Reference: https://paultan.org/2021/06/18/geely-sea-ev-architecture-detailed-5-versions-to-cover-all-sizes-including-sports-cars-and-pick-ups/

Will they sell the truck in the USA? We need more competition in the EV truck market!

Geely may bring the truck to the USA.
https://insideevs.com/news/597904/geely-unveils-radar-auto-rd6-electric-pickup-may-bring-it-us/
RADAR trucks would be built on Geely’s SEA platform and could use the Leishen Hi-X hybrid technology for the Range Extender. The Leishen Hi-X uses the Miller combustion cycle and low-pressure exhaust gas recirculation to achieve a thermal efficiency figure of 43.32% and will replace Geely group’s current 1.5TD powerplant.
This engine is similar to the Volvo based 1.5L B3154T Inline 3 Range Extender used on the LEVC TX. Combined with the SEA platform - an 800v system using CATL LFP batteries, this appears to be an amazing package.