Carbon transformation company Twelve, Alaska Air Group, and Microsoft have signed a Memorandum of Understanding (MOU) to collaborate on advancing the market for sustainable aviation fuels (SAF) to include fuels derived from recaptured CO2 and renewable energy, and working toward the first commercial demonstration flight in the United States powered by Twelve’s E-Jet. (Earlier post.)

Through the first-of-its-kind agreement, Twelve, Alaska, and Microsoft will work to advance production and use of Twelve’s E-Jet, a low-carbon jet fuel produced by a power-to-liquids process leveraging the company’s carbon transformation technology.

Twelve has developed an efficient polymer-electrolyte membrane (PEM) CO2 electrolyzer that uses proprietary CO2-reducing catalysts to split CO2 with just water and renewable electricity as inputs, syngas (CO and hydrogen) as the output, and pure oxygen as the only byproduct.

E-Jet is produced by Emerging Fuels Technology’s (EFT) technology to convert the syngas from Twelve into drop-in jet fuel.

As part of the work outlined to advance the scalability and use of the technology, the companies will work toward a demonstration flight using E-Jet, and to supply the fuel to address some of Microsoft’s business travel on Alaska. 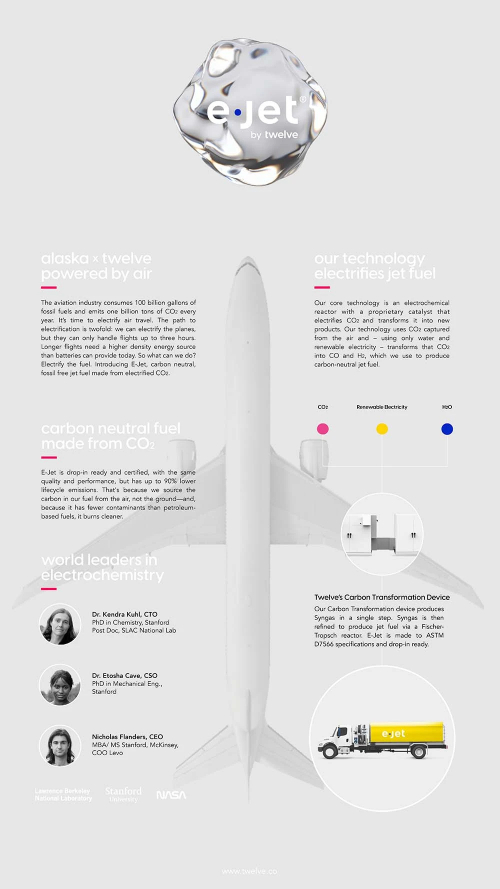 Transitioning to E-Jet will not only reduce reliance on fossil fuels but will release fewer particulates and reduce impacts on neighboring communities. In March, Shopify, one of the largest corporate purchasers of long-term carbon removal, announced the first purchase of E-Jet® through the company's Sustainability Fund.

SAF is a core part of Alaska’s five-part pathway to net zero by 2040. Since 2010, Alaska has worked with various public and private partners to advance public policies needed to jumpstart the nascent SAF market, create new offtake agreements and cultivate partnerships to accelerate market development. Alaska was also a founding member of the Aviators Group of the Sustainable Aviation Fuel Buyers Alliance, announced at COP26.

You can get CO2 from natural gas processing plants,
you don't need to get it from the air which is very expensive