The challenge of meeting Net-Zero Emissions by 2050 “will be short-circuited and remain out of reach” unless significant new copper supply comes online in a timely way, according to a new study by S&P Global that examines the growing mismatch between available copper supply and future demand resulting from the energy transition.

The study, entitled The Future of Copper: Will the Looming Supply Gap Short-circuit the Energy Transition?, projects global copper demand to nearly double over the next decade, from 25 million metric tons today to about 50 million metric tons by 2035 in order to deploy the technologies critical to achieving net-zero by 2050 goals.

The record-high level of demand would be sustained and continue to grow to 53 million metric tons in 2050—more than all the copper consumed in the world between 1900 and 2021.

The new study is in response to concerns raised by a number of authorities—including the US government, the European Union, the International Monetary Fund, the World Bank and the International Energy Agency—about the availability and reliability of supply of minerals that will be needed to meet climate goals.

The study projections are based on a detailed bottom-up, technology by technology approach that leverages the S&P Global Multitech Mitigation scenario, which achieves net-zero goals by 2050 and is comparable to the International Energy Agency’s new Net Zero by 2050 scenario.

Copper is the metal of electrification and absolutely essential to the energy transition. Given the global consensus for Net-Zero Emissions by 2050, it is critical to understand the physical materials required for achieving that ambition. The world has never produced so much copper in such a short timeframe as would be required. On current trends, the doubling of global copper demand by 2035 would result in significant shortfalls.

The demand surge would be driven, in large part, by the rapid, large-scale deployment of technologies such as electric vehicles, charging infrastructure, solar PV, wind and batteries. More copper-intensive than their conventional counterparts, demand from these areas would nearly triple by 2035. At the same time, copper demand from traditional sources not directly related to the energy transition would continue to grow. 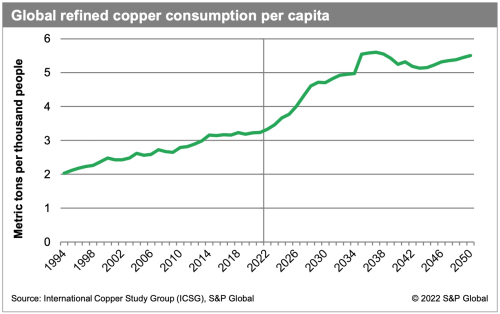 This “New Era of Copper Demand” would result in unprecedented and untenable shortfalls in supply, the study says.

This study finds that copper demand from the energy transition will accelerate steeply through 2035. Crucially, this dramatic escalation occurs well before 2050 while traditional growth continues to ramp up. The conclusion: achieving the stated climate ambitions will require a rapid and massive ramp-up of copper supply far greater than is visible in any private or public plan.

—The Future of Copper

Notably, growth in new copper supply capacity—from new mines or expansions of existing projects—would unlikely be able to keep pace with the surge in demand, the study says. The International Energy Agency has estimated that it currently takes 16 years, on average, to develop a new mine—i.e., a new mine seeking permission today would not become productive in time to accommodate the demand spike.

That leaves increases in capacity utilization (output as a percentage of an existing mine’s total capacity) and recycling as the main sources of additional supply, according to the study.

Under current trends—whereby both capacity utilization and recycling rates remain at their current 10-year global average—the study’s Rocky Road Scenario projects annual supply shortfalls that reach nearly 10 million metric tons in 2035. That is equivalent to 20% of the demand projected to be required for a 2050 net-zero world.

Even under the study’s optimistic High Ambition Scenario—which assumes aggressive growth in capacity utilization rates and all-time high recycling levels—the copper market will endure persistent supply deficits through most of the 2030s, including a deficit of nearly 1.6 million metric tons in 2035—much higher than any previous shortfall. 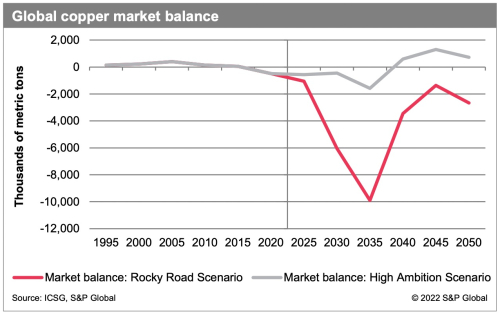 Under either scenario, there would not be enough supply to meet the demand of Net-Zero Emissions by 2050. The study also identifies eight key operational challenges that can constrain supply, ranging from infrastructure limitations, to changing tax regimes and permitting.

This comprehensive analysis demonstrates that, even at the outer edge of what could happen in copper mining and refining operations, there would not be enough supply to meet the demands of a Net-Zero Emissions by 2050 world. Even strong price signals and incentivizing policy initiatives, aggressive capacity utilization rates and all-time high recycling rates would not be enough to close the gap.

Such a supply gap would have broader consequences across the global economy, disrupting supply chains for both energy transition and non-energy transition industries, the study says. Given copper’s use in a wide range of end markets, it would also exert tremendous upward pressure on the cost of goods for global manufacturers as well as energy costs for consumers.

The study also finds that the burgeoning supply gap would exacerbate the growing reliance on copper imports in the United States, in particular. Imports made up nearly 44% of US copper usage in 2021, up from just 10% in 1995. Under the study’s scenarios, that share would swell to between 57 and 67% by 2035. An intensifying competition for critical metals is very likely to have geopolitical implications, the study says.

The challenge for all active participants in the energy transition will be to manage often competing and seemingly contradictory priorities in this New Era of Copper Demand. Technology and innovation will both be critical in meeting this challenge, as will partnership between governments, producers and end-users. ‘Dr. Copper’, as the metal is called, may well currently be, as it has been in the past, a leading indicator of a slowdown in economic growth or recession, but the overall supply outlook for the years ahead is extremely tight.

The study examines whether sufficient copper supplies will be available in the time frame required to build and deploy the technologies for achieving the target of Net-Zero Emissions by 2050. It presents a holistic view, drawing on the expertise and data across S&P Global’s Commodity Insights, Market Intelligence and Mobility divisions.

The study utilizes a detailed bottom-up approach, technology by technology to quantify the amount of additional copper that will be required by increased electrification and the energy transition—most specifically, the rapid move to electric vehicles and renewable electricity and the need for increased electricity infrastructure. It then examines the ability of copper supply to meet that demand on the basis of current trends, or with an unprecedented acceleration of supply from mining and recycling. It also identifies the key operational risks that can constrain future supplies.

The study makes no policy recommendations. It is intended to contribute to the continuing dialogue about achieving Net-Zero Emissions by 2050 by quantifying the requirements of that goal and benchmarking them against the supply response.

The analysis and metrics developed during the course of this research represent the independent analysis and views of S&P Global.

S&P Global is exclusively responsible for all of the analysis, content and conclusions of the study.

The first question which comes to my mind is:
'To what extent can more abundant and cheaper aluminum be substituted for this demand?'

I haven't happened on any really good in depth analyses, but perhaps use in transport is likely to be more difficult than for stationary applications (?)

Here is one quick link to possible substitution:

' “Too many forecasts ignore the fact that aluminum is a serious competitor to copper in a number of high volume applications, including high- and mid-voltage power cable, busbars, transformer windings and motor windings,” says Julian Kettle, Wood Mackenzie Senior Vice President, Vice-Chair Metals and Mining.

“In fact, given its lower cost, aluminum wins out against copper under virtually any realistic long-term price scenario. Only at extreme carbon tax levels does aluminum’s higher carbon tax footprint at the margin lead to copper becoming competitive at price levels that historically would have been prohibitive”'

Anyone got in depth analyses?

Here are two examples of aluminum electric motor windings.
“ Researchers at Fraunhofer IFAM have developed a casting technique that can be used to produce lightweight aluminum windings . . .”
https://www.greencarcongress.com/2019/11/20191119-ifam.html

As one of your links elsewhere says, sodium batteries can also use aluminum in place of copper, so we have some viable methods to reduce copper use.

Proven worldwide reserves are nearly 1B tonnes.
Likely economically accessible quantities are 5 - 7x that.
Half of the top 10 producers/ reserve countries are western-friendly, pro-capitalist, politically-stable, and have a tradition of -mine production from approval- at 10 years or less in the more developed regions (AZ, etc). Mining technologies, automation, and refinement improvements are on the verge of colossal acceleration and cost reduction. Political and NIMBY obstacles will likely moderate elsewhere.

Unfortunately, in the current and foreseeable politico-economic environment between asia, eastern europe, and the main G7 countries as technology incubators there will be inconsistent availability of the main products of copper - cars, infrastructure, and controllers/ machinery. Inconsistent access will be create lack of tech uptake in much of the developing world. But, to the most productive and innovative, the crucial supplies must go so that cost reductions and quantities can be realized - you must make the pie bigger before you effectively 'share it out'.

Any failure to reach CO2 neutrality by whatever deadline has to fall at the feet of those cultures and regions unwilling to take up significant pro-technology, pro-growth, pro-consumer values that has otherwise propelled everywhere else in the world to solve their own problems and be a part of the solution.

Copper is relatively abundant and 100% recyclable. However, it is more expensive than aluminum and heavier. BEV use over 180 lbs of copper in each vehicle vs less than 50 lbs in ICE cars.
https://www.copper.org/publications/pub_list/pdf/A6191-ElectricVehicles-Factsheet.pdf
An important area for aluminum use is not the Electric motor but the wiring harness.
Wiring harnesses are costly, labor intensive, and heavy. A Tesla Model S has 10,000 feet of wiring harness (reduced in half in the Model 3) and Tesla has patents on reducing this length even more.
More references:
https://www.wilsonpowersolutions.co.uk/copper-vs-aluminium/
https://www.pnnl.gov/news-media/cooking-conductive-alternative-copper-aluminum
https://www.cnet.com/roadshow/news/tesla-wiring-patent-application/
https://chargedevs.com/features/a-closer-look-at-wire-in-evs/

Other major users, which we need to rapidly expand, are wind:

In the past I was very dubious about solar in Europe, although a fan for places like Africa, for two reasons: seasonal variability and land use.

I think we are now getting to the point of 'good enough' solutions for seasonal storage, including relatively high efficiency ammonia production and use, and CO2 as in Energy Dome:

And Agrivoltaics can mean that not only can huge areas of agricultural land be used, but it can not only increase, not decrease crop productivity by providing shade in increasingly heat stressed areas, but reduce water use:

for wind, I was a fan of high altitude, but as Makani noted, although they were taking cost out, costs of ground based structures was decreasing so fast it was not becoming viable, and as 'Engineering with Rosie' notes here:

Flexibility in structures massively increases wear, so the kites I fancied look like having a daft 400 hours or so flight life before needing replacement.

And if we can stop putting in prohibitive regulations crippling nuclear, molten salt reactors should be able to do as much of the job of producing low carbon energy economically as we fancy.

But all the options except the nuclear one (?) seem to require very large increases in copper/and/or aluminum.

I'd also note that major reductions in resource demand can be made by going for more ecological living choices.

So instead of going for an electrified Houston-type transport system, with vast battery Tesla-style vehicles, some move is made to more walkable neighborhoods, similar to where I live, with pedal delivery bikes, scooters, etc, which judging by the house prices is enormously popular.

And decent house insulation, together with, for instance, initiatives like green/and/or whilewashed roofs for commercial buildings can greatly reduce demand for heating.

There are loads of options beside brute force.