BMW will shortly begin an intensive period of testing for the BMW M Hybrid V8, with which BMW M Motorsport will be battling for overall wins in 2023 in the IMSA GTP class of the WeatherTech SportsCar Championship. The project had already reached a key milestone before the rollout: the successful fire-up of the hybrid drive system after installation in the test vehicle at the end of June.

The BMW M Hybrid V8 is powered by the P66/3 eight-cylinder turbo engine with supplementary electric drive. The combustion engine is based on the DTM unit used in the BMW M4 DTM in 2017 and 2018. During two phases of reconstruction, it underwent comprehensive adjustments to meet the stringent requirements of the LMDh (Le Mans Daytona h) hybrid drive system. 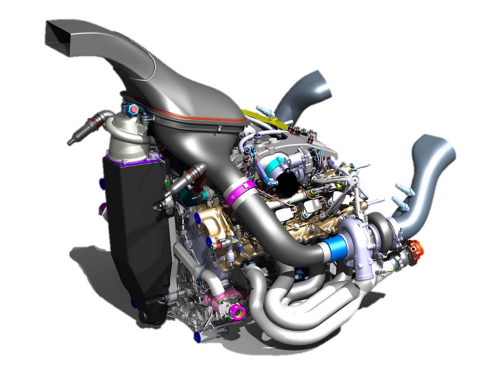 Ulrich Schulz, Head of Drivetrain Design at BMW M Motorsport, and his group had initiated an evaluation to determine which race engine would be best suited for conversion into a high-performance hybrid drive system, even before the BMW Group Board of Management had given the green light to the BMW M Motorsport entry in the LMDh category in June 2021.

Time constraints and the need to consider sustainability aspects that are playing an ever more critical role in motor racing, as well as the automobile industry in general, meant that returning to the drawing board to design a completely new engine and building it at great cost was not an option. Consequently, the question was to establish which proven race engine would best meet the stringent requirements and specifications of the LMDh regulations.

The normally-aspirated P66/1 eight-cylinder engine used in the 2017 and 2018 seasons in the BMW M4 DTM was the one that got the nod. As a fully load-bearing component in the BMW M Hybrid V8, it had the advantage that it could be used in a monocoque chassis without an additional subframe and it was also the one that most closely corresponded to the regulatory requirements after conversion to a hybrid turbo engine.

During the evaluation phase, we also took a look at the P48 four-cylinder turbo engine from the BMW M4 DTM and the P63 eight-cylinder turbo engine from the BMW M8 GTE, but potential problems with the durability of the P48 and the heavy weight of the P63 were negative considerations. It is a huge plus that we were able to make use of existing materials such as steel and aluminium from BMW’s time in Formula 1 for the basis of the engine, as well as for individual components—like shafts, housing and small parts. That saved us time and a lot of money and was therefore efficient and sustainable.

Efficiency is a critical factor for this project, as we have a very short period of time available between getting started and the first racing appearance at Daytona in 2023. Converting the normally-aspirated P66/1 engine into a bi-turbo and then working with the electric drivetrain colleagues to turn it into a hybrid drive system was very complex. Thanks to the expertise, the great collaboration and the high level of motivation of all departments, we managed to complete the fire-up of the complete drive unit just a few weeks ago. We now feel that nothing is standing in the way of testing.

The first phase saw the normally-aspirated P66/1 DTM engine converted into an intermediate engine, named P66/2, primarily by adapting two turbochargers and adjusting the crank drive. The focus was on durability, increased performance and temperature management for the engine. The P66/2 completed numerous testing units, including complete racetrack simulations, on the test bench.

The next step was the creation of the P66/3 race engine, including a twin-turbo version, adjustments to the specific requirements of the Dallara chassis, final exhaust system, oil tank, cabling and integration of the high-voltage environment. The cylinder block and cylinder heads were recast in the BMW Group foundry in Landshut (GER) and the injection system was rebuilt for direct injection. Engineers who already boasted plenty of experience with electric drive systems from the Formula E project were testing and integrating the electric motor in parallel.

The unit that forms the hybrid drive system in the car consists of the e-motor, the inverter and the high-voltage battery. There is a separator clutch between the electric and combustion engines, enabling fully-electric driving—in the pit lane, for example.

The two drive components were connected in the car for the first time at the end of June. The first fire-up for the hybrid system was a success. At the end of July, that will be followed by the rollout in Varano de Melegari (ITA). The intensive test phase begins immediately after that.

I had always held BMW for intelligent enough to look forwards and progress. What a waste of time, effort and financial resources in a futile attempt to secure the past.

1.409 / 5.000
Übersetzungsergebnisse
Knowing BMW very well, unfortunately, I have to state clearly that BMW is a technologically backward company that is now selling the old V8 ICE DTM N/A as bi-turbos as the new V8. BMW doesn't say that the old DTM V8 has very complex new cylinder heads, because you can't just put the direct injection nozzles in the spark plug hole, you have to have a second deep hole in the right place for the injection nozzles. So a marketing interview from BMW as so often!
Incidentally, Porsche also uses the old V8 with lateral turbos for the LMDh hybrids, since the standard 90° Hot-V V8 engines are unsuitable. Only 120° V6 or V8 with Hot-V would be possible, but that would be completely new engines that are not and never were in series production at BMW or Porsche. Only Maserati, Ferrari and McLaren have such V6 engines in small series!
Acura will probably also take an old V6 or V8.

Here I have to praise Cadillac, because as far as one can read and hear, the GM LT6 N/A is probably used, but not with a flat-plane crankshaft but with a 90° cross-plane crankshaft. But probably as a biturbo so that the torque is as high as with BMW and Porsche.
Then the IMSA and FIA regulate the performance back with the Ballance of Performance (BoP) so that all LMDh have the same performance. By the way, also with the hypercars! So this is all just marketing. Good this way?