Direct Air Carbon Capture and Storage (DACCS) involves filtering and removing CO2 emissions directly from the air using high powered fans. Once removed from the air, the CO2 is stored in geologic reservoirs. As the aviation industry cannot capture CO2 emissions released into the atmosphere at source, a direct air carbon capture and storage solution would allow the sector to extract the equivalent amount of emissions from its operations directly from atmospheric air. 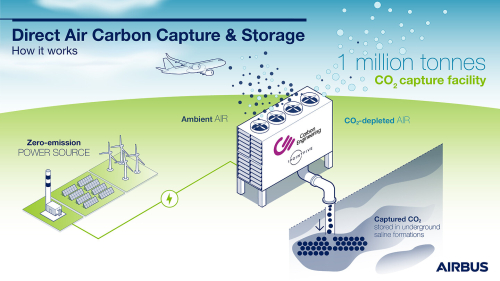 As part of the agreements, the airlines have committed to engage in negotiations on the possible pre-purchase of verified and durable carbon removal credits starting in 2025 through to 2028. The carbon removal credits will be issued by Airbus’ partner 1PointFive—a subsidiary of Occidental’s Low Carbon Ventures business and the global deployment partner of direct air capture company Carbon Engineering (CE).

CE’s Direct Air Capture technology has four major pieces of equipment that each have industrial precedent and have been widely used in large-scale industries for years.

1PointFive has teamed up with Worley for FEED of the largest Direct Air Capture facility in the world. With an anticipated capture capacity of one million tonnes of CO₂ each year when fully operational, DAC 1 is expected to come online in 2024. 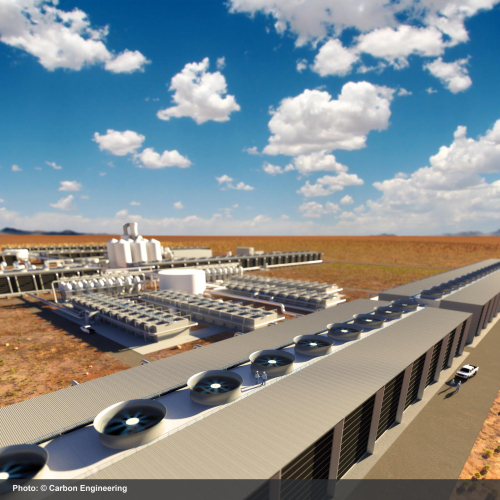 In addition to DAC plus storage plants, Carbon Engineering is also exploring Air to Fuels plants, which combines CE’s DAC technology with hydrogen generation and fuel synthesis to deliver near carbon-neutral synthetic fuel.

Airbus’ partnership with 1PointFive includes the pre-purchase of 400,000 tonnes of carbon removal credits to be delivered over four years.

According to the Intergovernmental Panel on Climate Change (IPCC), carbon removal is required to help the world go beyond climate mitigation and to support the achievement of net-zero targets. In addition, according to the Air Transport Action Group’s (ATAG) Waypoint 2050 report, offsets (mainly in the form of carbon removals) will be needed—between 6% and 8%—to make up any remaining shortfalls in emissions above the goal.

Even if they could get air capture down to $200 a ton it is not worth it.
A $40 ton of coal produces 4 tons of CO2,
much more cost effective to put power plant pollution in the ground.

I thank Airbus and the major airlines involved, because only research, development and action lead to success.
I wish that many more companies would take action on these issues and not just plan and then talk about what might be possible.

This makes sense to me, as long as the direct capture is done with renewable. Now here's the interesting point, which only I am able to spot.
The renewable energy capture can be located anywhere in the world- so floating wind turbines in the roaring 40s for example, or solar in the Sahara. Just please leave AOC policy by fiat out of the equation, the only thing govt deadlines achieve is entertainment for China and other cheaters.

Potassium carbonate melts at 891°C; it decomposes at some still-higher temperature.  This calcining process is NOT going to be energy-cheap.

Synthesize carbon-neutral jet fuel from CO2 and H2 using nuclear power. Don't burn fossil fuels and then try to capture some of the resulting CO2 from the air. Surely that is doing things the hard way.

Definitely not cheap, though doable.
From reference:
“ the design requires either 8.81 GJ of natural gas, or 5.25 GJ of gas and 366 kWhr of electricity, per ton of CO2 captured. Depending on financial assumptions, energy costs, and the specific choice of inputs and outputs, the levelized cost per ton CO2 captured from the atmosphere ranges from 94 to 232 $/t-CO2.”
Reference: “ A Process for Capturing CO2 from the Atmosphere”
https://www.sciencedirect.com/science/article/pii/S2542435118302253

Another good reference from Carbon Engineering:
“We find that an electricity emissions factor of less than 139 g CO2e per kW h is required for this pathway to provide a climate benefit over conventional diesel fuel.”
https://carbonengineering.com/wp-content/uploads/2020/04/c9se00479c.pdf