In the United States, refining capacity has decreased by about 1.1 million b/d since the start of 2020, contributing 184,000 b/d to the global decline in 2021. Global demand for refined products dropped substantially in 2020 as a result of the COVID-19 pandemic. Less petroleum demand and the associated lower petroleum product prices encouraged refinery closures, reducing global refining capacity, particularly in the United States, Europe, and Japan. However, the US Energy Information Administration (EIA) notes that a number of new refinery projects are set to come online during 2022 and 2023, increasing capacity. 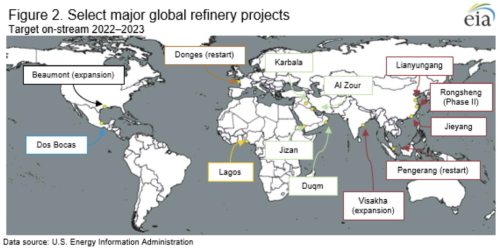 As global demand for petroleum products returned closer to pre-pandemic levels through 2021 and early 2022, the loss of refinery capacity contributed to higher crack spreads—the difference between the price of a barrel of crude oil and the wholesale price of petroleum products—which serve as one indicator of the profitability of refining.

After Russia began its full-scale invasion of Ukraine in late February 2022, the impacts of reduced global refining capacity were exacerbated. Associated sanctions on Russia—with more than 5 million b/d in crude oil processing capacity—disrupted exports of Russia’s refined products into the global market, and will likely continue to do so as import bans in the European Union and United Kingdom come into full force.

High-capacity refineries require access to reliable sources of crude oil inputs to maintain higher utilization and to a sufficiently large pool of potential customers to supply. Many of these new refineries are located in coastal areas and have easy access to export refined products that are not consumed domestically.

The most global refining capacity under development is in China. Chinese capacity is scheduled to increase significantly this year because of the start of at least two new refinery projects and a major refinery expansion.

The first new refinery is the private Shenghong Petrochemical facility in Lianyungang, which has an estimated capacity of 320,000 b/d and reported trial crude oil-processing operations beginning in May 2022. The second new refinery is PetroChina’s 400,000 b/d Jieyang refinery, in the southern Guangdong province, which is expected to come online in the third quarter of 2022 (3Q22). A planned 400,000 b/d Phase II capacity expansion also began operations earlier in 2022 at Zhejiang Petrochemical Corporation’s (ZPC) Rongsheng facility.

Although these projects are the most imminent new capacity expansions in China, the country is expected to continue increasing its refining and petrochemical processing capacity through a number of additional projects expected to come online by 2030. Most noteworthy among these additional expansions are the 300,000 b/d Huajin and the 400,000 b/d Yulong refinery projects, which both have target start dates in 2024.

Outside of China, the 300,000 b/d Malaysian Pengerang refinery restarted in May 2022 after a fire forced the refinery to shut down in March 2020. The refinery’s return is likely to decrease petroleum product prices and increase supply, particularly in south and southeast Asian markets.

Substantial refinery capacity was also added in the Middle East during the past year. The 400,000 b/d Jizan refinery in Saudi Arabia reportedly came online in late 2021 and began exporting petroleum products earlier this year. More recently, the 615,000 b/d Al Zour refinery in Kuwait—the largest in the country when it becomes fully operational—began initial operations earlier this year and the facility’s operators expect to increase production through the end of 2022. A new 140,000 b/d refinery is scheduled to come online in Karbala, Iraq, this September, targeting to be fully operational by 2023. A new 230,000 b/d refinery operated by a joint venture between state-owned-firms OQ (of Oman) and Kuwait Petroleum International is set to come online in Duqm, Oman, likely in early 2023.

More than 2 million b/d of new refining capacity construction is expected to come online to support markets in the Indian Ocean basin in 2022. At the same time, a handful of major projects are also planned in the Atlantic basin. The 650,000 b/d Dangote Industries refinery in Lagos, Nigeria, set to be the largest in the country when completed, may come online in late 2022 or 2023. The refinery would most likely meet Nigeria’s domestic petroleum product demand as well as demand in nearby African countries, and it would also reduce demand for gasoline and diesel imports into the region from Europe or the United States.

In Mexico, state-owned refiner Pemex has been building a 340,000 b/d refinery in Dos Bocas, which hosted an inauguration ceremony on 1 July, even though the refinery is still under construction and is unlikely to begin producing fuels until at least 2023.

TotalEnergies is planning to restart its 222,000 b/d Donges refinery along the Atlantic Coast of France in May 2022, after closing the facility in late 2020, and some reports indicate the facility has begun importing crude oil for processing.

In addition to major new refinery projects, other facilities are also moving forward with capacity expansions at existing refineries—particularly in India. HPCL’s Visakha Refinery is undergoing a major expansion, estimated at 135,000 b/d, which is scheduled to come online by 2023. A number of other similar expansions are underway in India that may come into effect in 2024 or later.

Although no projects to build new refineries in the United States are currently planned, major refinery expansions are underway at a handful of Gulf Coast refineries, most notably ExxonMobil’s Beaumont, Texas refinery, which plans to increase its capacity by 250,000 b/d by 2023.

Facilities along the Gulf Coast currently account for 54% of all US domestic refining capacity. They supply fuels for US domestic petroleum consumption, but they are also substantial exporters into the Atlantic basin market, particularly into Central and South America and also into Europe. 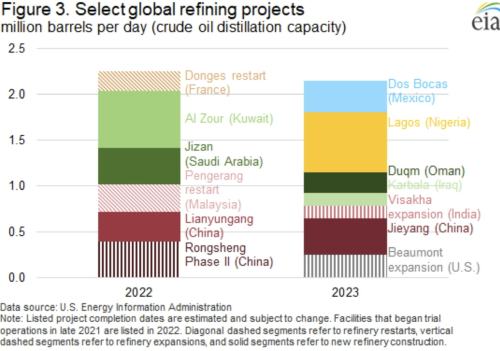 EIA cautions that the estimate is not necessarily a complete list of ongoing refinery capacity expansions. Moreover, many of these projects have also already been subject to major delays, and the possibility of partial starts or continued delays related to logistics, construction, labor, finances, political complications, or other factors may cause these projects to come online later than currently estimated.

"Crack spread" is full of holes - this is the result of speculation since 2007 and we all know it. Just make contracts actual purchases between actual producers and actual refiners (what a concept), and bu-bye extreme volatility, as long as pre-paid contract resale (a rarity) is 30 days or more.