Researchers in Europe led by a team from ETH Zurich have designed a fuel production system that uses water, CO2, and sunlight to produce aviation fuel. The team implemented the system at pilot-scale in the field to demonstrate the technical feasibility of the entire sun-to-liquid fuel process chain, from H2O and CO2 to kerosene. An open-access paper on the work is published in the journal Joule.

We are the first to demonstrate the entire thermochemical process chain from water and CO2 to kerosene in a fully-integrated solar tower system.

—Aldo Steinfeld, a professor from ETH Zurich and the corresponding author of the paper

Previous attempts to produce aviation fuels through the use of solar energy have mostly been performed in the laboratory.

With our solar technology, we have shown that we can produce synthetic kerosene from water and CO2 instead of deriving it from fossil fuels. The amount of CO2 emitted during kerosene combustion in a jet engine equals that consumed during its production in the solar plant. That makes the fuel carbon neutral, especially if we use CO2 captured directly from the air as an ingredient, hopefully in the not-too-distant future.

The solar-made kerosene is fully compatible with the existing aviation infrastructure for fuel storage, distribution, and end use in jet engines, Steinfeld says. It can also be blended with fossil-derived kerosene. 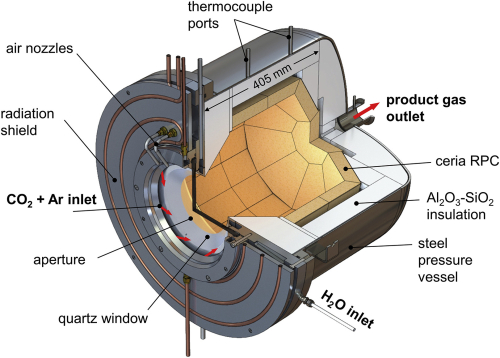 Schematic of the solar reactor for splitting H2O and CO2 via the ceria-based thermochemical redox cycle. It consists of a cavity-receiver containing a ceria RPC structure directly exposed to concentrated solar radiation entering through a windowed circular aperture. During the reduction step, the RPC is exposed to the high solar fluxes; O2 evolves. During the oxidation step, reacting gases CO2 and H2O enter via tangential inlet ports at the front and flow across the porous RPC; syngas is formed. Product gases (O2 during the reduction step, syngas during the oxidation step) exit via an axial port at the rear of the vessel. Zoller et al.

In 2017, the team started scaling up the design and built a solar fuel-production plant at IMDEA Energy Institute in Spain. The plant consists of 169 sun-tracking reflective panels that redirect and concentrate solar radiation into a solar reactor mounted on top of a tower.

The concentrated solar energy then drives oxidation-reduction (redox) reaction cycles in the solar reactor, which contains a porous structure made of ceria. The ceria—which is not consumed but can be used repeatedly—converts water and CO2 injected into the reactor into syngas, a tailored mixture of hydrogen and carbon monoxide. Subsequently, syngas is sent into a gas-to-liquid converter, where it is finally processed into liquid hydrocarbon fuels that include kerosene and diesel.

During a nine-day run of the plant reported in the paper, the solar reactor’s energy efficiency—the portion of solar energy input that is converted into the energy content of the syngas produced—was around 4%. Steinfeld says his team is working intensively on improving the design to increase the efficiency to values over 15%.

For example, they are exploring ways to optimize the ceria structure for absorbing solar radiation and developing methods to recover the heat released during the redox cycles.

This work is supported by Swiss State Secretariat for Education, Research and Innovation, and the EU Horizon 2020 research and innovation program.

I was wondering 'whatever happened to solar thermal?'

The answer appears to be simply that solar pv has been dropping in price so fast that no one bothered, rather than any insuperable technical obstacles.

But in more specialised applications like this, it may have a niche.

Incidentally, it is much the same story for high altitude wind, where Makani gave as their primary reason for closing that conventional wind was dropping in cost so fast that it was not going to catch up, rather than any technical impossibility.

If the aviation industry switches to this they will still be burning kerosene high in the atmosphere.

Kerosene production at what cost will decide whether this process is viable.

They are looking to hydrogen as the longer term solution.

The old 'Desertec' proposals for solar in North Africa transmitted by cables to Europe, which I was deeply unenthusiastic about, relied on solar thermal.

Solar pv is now the usual solution they are looking too, and using a combination of cables and hydrogen.

Digging up cable routes through to Northern Europe is a massively disruptive undertaking, and shipping the hydrogen to a port in combination with undersea cables, where they can work, for instance from Morocco to the UK, is now really what is on the table.

If you used heat from nuclear, you could do this anywhere, all the time.