The Arcus-J glider is configured like any sailplane capable of free flight thanks to its 20-meter wingspan, but with the added advantage of a retractable PBS TJ-100 jet engine to optimize the glider’s self-launching and long cross-country capabilities.

Contrail characterization is of significant interest to Airbus. We know that hydrogen emits no carbon dioxide when burned, but we also know that with water vapor and heat being the most significant by-products, hydrogen combustion does produce contrails. Although these contrails differ significantly to those produced by conventional JetA/A1 combustion engines, understanding their composition will be key to support our decarbonization journey.

In taking up this challenge we are making significant headway in our decarbonization strategy and our ambition to bring the world’s first zero-emission commercial aircraft into service by 2035. 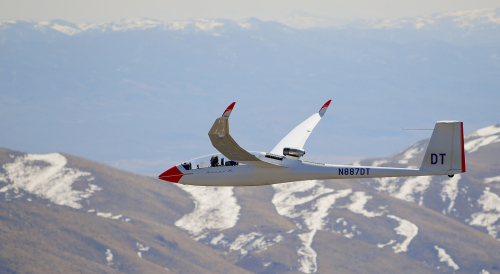 The Blue Condor demonstrator will be supported by the Perlan Project team, which will be responsible for the modification of the Arcus gliders. They will also provide the high-altitude glider pilots, the same pilots who in 2018 set the world subsonic altitude record—76,124 feet—in a pressurized glider for Airbus Perlan Mission II.

The German Research Centre DLR will collect and analyze data captured using their measurement instrumentation sensors on a chase aircraft, while Airbus will ensure the provision of the hydrogen system and equipment, including the combustion engine as well as the details of the flight test mission.

To ensure 100% comparable data between the hydrogen and conventional engine, the test flights will be carried out back-to-back under the same meteorological conditions. Test flights are scheduled for late 2022 in North Dakota in collaboration with the University of North Dakota.

Airbus Perlan Mission II is also continuing, with plans in 2023 to soar to altitudes approaching the Perlan 2 glider’s 90,000-feet service ceiling, in order to conduct research of upper atmospheric weather. If successful, Airbus Perlan Mission II would set the all-time world altitude record for wingborne flight, and would do so in a zero-emission aircraft.

I wonder are Airbus doing this to kill hydrogen by saying that it is only X percent better than hydrocarbon fuels (rather than 100% better).
Then, they can go with SAF (or some kind of SAF blend) without the inconvenience of having to redesign everything, including the fueling infrastructure.

This is important research;
“ . . . hydrogen combustion does produce contrails. Although these contrails differ significantly to those produced by conventional JetA/A1 combustion engines, understanding their composition will be key to support our decarbonization journey.”
What most people do not know is that “Water vapor is Earth’s most abundant greenhouse gas”.
https://climate.nasa.gov/ask-nasa-climate/3143/steamy-relationships-how-atmospheric-water-vapor-supercharges-earths-greenhouse-effect/