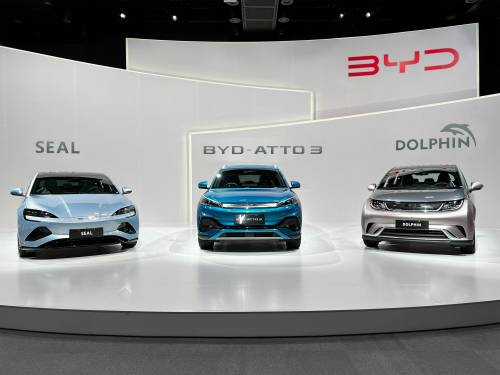 BYD ATTO 3 is slated to become the first BYD passenger vehicle sold in Japan, with sales expected to begin in January 2023. BYD Dolphin (a subcompact hatch) and BYD Seal are expected to follow soon after, hitting the market in the middle and second half of 2023, respectively.

The new Seal sedan (BYD started taking pre-orders in May) will be the first to include BYD’s new cell-to-body (CTB) technology. Like Dolphin, Seal is a member of the Ocean Series of vehicles.

As one of the first enterprises to develop electric vehicles in the world, BYD has accumulated 27 years of expertise and experience in the field of new energy vehicles, and has mastered the advanced technologies spanning batteries, electric motors, electronic control systems and automotive-grade chips. Today, with the support and expectation of consumers, BYD officially hits the new energy passenger vehicle market in Japan. Through the joint efforts of BYD and the local NEV market, we are dedicated to leading the way in e-mobility for a better life.