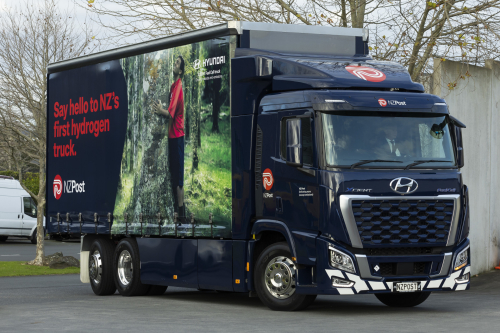 The New Zealand Government Emissions Reduction Plan includes a target to cut emissions from freight transport by 35% by 2035. Heavy transport makes up 4% of New Zealand’s transport fleet but is responsible for 25% of all transport emissions.

The XCIENT fuel cell truck will take over from one of its emission-heavy diesel counterparts, saving 1701 tonnes of CO2 per year from being emitted and displacing approximately 100 passenger cars emissions based on typical annual mileage.

High capacity hydrogen refueling stations are on their way, such as Hiringa Energy’s four North Island stations coming online in early 2023. Until these first commercial refuelling stations are built, the truck will be fuelled using green hydrogen supplied by BOC.

NZ Post’s Hyundai XCIENT Fuell Cell truck will now undergo a validation process. This includes operating the truck in different configurations, first as a truck only, then as a truck and trailer combination on several routes, gaining New Zealand specific performance information to refine software settings and define the best-operating routes for this technology.

Once the commercial infrastructure is in place next year, this truck's ideal first operational route is likely to be Auckland – Hamilton – Auckland – Whangarei.

' Heavy transport makes up 4% of New Zealand’s transport fleet but is responsible for 25% of all transport emissions.'

Something well worth reducing.
New Zealand can produce 100% of the hydrogen needed renewably.

There are already dozens of these running around in Switzerland, so the New Zealand testing is tweaking of a proven vehicle and fueling systems:

The Hyundai XCIENT Fuel Cell Truck is an excellent design with a relatively large battery (72 kWh) and small fuel cell (180 kW), which may help costs.
https://trucknbus.hyundai.com/global/en/products/truck/xcient-fuel-cell

Though off topic, hydrogen fuel cell best transportation area may be in VTOL and one of the best designs is the Piasecki PA-890 Compound Helicopter. Piasecki is working with HyPoint HTPEM fuel cells and could have the first hydrogen helicopter.
Helicopters are a good area because of current cost (>$800k) and poor efficiency of small gas turbines (25% BTE).
https://newatlas.com/aircraft/piasecki-world-first-hydrogen-helicopter/

Yeah, I have been following Hypoint in particular, and I think Piasecki's point here from your link is a very valid one:

' "Vertical lift is a challenging operating environment," he told the room at H2 Aero. "It demands high discharge and recharge rates – high C rates. And even assuming a certain level of energy density became available in future batteries, most battery technologies' cycle life drops by an order of magnitude under high C rates. '

So I have tended to be more enthusiastic about designs which allow swapping of batteries between trips rather than relying on fast charging.

I prefer to see if a criteria can be relaxed rather than hope that progress will 'inevitably' allow ambitious targets to be hit.

For those who have not been following Hypoint and their high density higher temperature fuel cells, there is a decent video here:

Just a note in case you have not spotted it yet:

H2Fly is now moving to liquid hydrogen, which will double the range they are getting:

Since they also have been using low temperature PEM fuel cells, clearly further improvements are on the cards as by using medium temperature cells, like Hypoint.

Followed H2Fly for years and DLR is doing important research in the area of Hydrogen Fuel Cells and Aviation. There still is significant research needed into liquid hydrogen as an aviation fuel.
Decades ago I worked with using metals in cryogenic environments, i.e. Inconel and Stainless Steel. This was involved with Aerospace applications. Yet even there you did not have the challenges involved with long endurance flight in a variety of climate conditions. These must all be tested. And then we have to worry about costs (Liquid H2 is four times the cost of Jet-A fuel). Today, the best bet is Sustainable Aviation Fuel and in special applications like eVTOL compressed H2.

It sure is challenging, and flying has to be somewhat more expensive to cover the costs.
It is though one of the fastest growing areas for carbon emissions, and far more optional than, say, steelmaking.

I do find some of the data on GW somewhat concerning`;

' "However, alarmingly our calculations also show that we are now currently emitting carbon dioxide 200 times faster than those supervolcanic eruptions that caused the most severe mass extinctions."'

Which prompts the thought that those who maintain that humanity really does not affect the overall climate, and that it is nothing to worry about, may be somewhat less than well advised.

Many moons ago I was in cost and works accounting, and it is possible to make surprisingly good fits for cost reductions, since a lot of it is more or less 'baked in the cake' with increased volumes and learnings in production methods leading to relatively predictable cost falls.

So I am confident that although as far as we can see hydrogen is likely to lead to some increase in costs, it is going to be nothing like the present 4 times or so you have rightly cited.

Here is one analysis showing the most probable needed supplement to flight costs, among much else:

See page 34 for synthetic jet fuel costs at very low hydrogen production costs, and page 35 indicating an 18% increase in long haul aviation prices, and as they remark there:

' Use of clean hydrogen would have a significant impact on the price of
intermediate products, but a negligible impact on final product prices
in most sectors'

None of this directly addresses your point about choices between sustainable aviation fuel and liquified hydrogen, but perhaps it does indicate that if the human race dies out due to climate change, the epitaph will be that we died of stupidity.

More directly to your point, the likes of Airbus seem to reckon that modern materials are up to coping with liquified hydrogen.

My 'expert' judgement is that: 'I dunno, but I hope they know what they are talking about!' ;-)

Here is a new report on the limitations and potentials of batteries, hydrogen engines and fuel cells in air transport:

It seems to pretty much be an open question, depending on how things go.
So a definite maybe.

Just a bit of mere technology to sort out then! ;-)

“ . . expected advances in lightweight cryogenic tanks could mean liquid hydrogen – which doesn’t require the heavy, pressurized tanks that gaseous hydrogen does – could achieve a gravimetric energy density that is over twice that of jet fuel.”

This is where I disagree with that report and the reason the mention about “Inconel and Stainless Steel” which will be required for pumps, valves, and tubing. Forget Carbon fiber fuel tanks, NASA looked into that long. The SpaceX Starship will be built out of “Stainless Steel”.
So the Airbus A380 sized Liquid Hydrogen fueled aircraft will be built more like the SpaceX Starship than a Carbon Fiber intensive Boeing 787 (and carry fewer passengers).
Sustainable Aviation Fuel will require large amounts of “Green Hydrogen”, cost not much more than 2022 Jet-A fuel costs (which is already inflated). Improve engine efficiency and reduce short range air travel then we will get a significant reduction in GHG.

To say that I am out of my depth would be a massive understatement.

It is difficult for me even to understand the nature of your objection with any precision.

It seems to focus on the weight and/or costs of valves and ancillaries.

I am also entirely ignorant as to when and on how definitive and impossible to see any alterations or advancements NASA rejected carbon fiber tanks.

Here is what Hypoint propose:

Since it has been tested to TRL6+, it seems to have at least some of the characteristics of something which could work.

And here are other guys with similar systems:

The list of backers is hardly one of the technically inept.

Or how this relates, if at all, to Daimler/Linde's development of supercooled hydrogen refueling for trucks.

I am not disagreeing, I don't know nearly enough to disagree, or, since players with apparent expertise seem to imagine that the problems are at least conceptually soluble, the degree of confidence with which it can be ruled out.

Got any pointers to some info which is not infinitely abstruse? Or just which bits you think are out of the question?

NASA started work on composite tanks 10 years ago with Boeing.
See:
https://ntrs.nasa.gov/api/citations/20160008034/downloads/20160008034.pdf)
https://ntrs.nasa.gov/citations/20160008034
Not sure what Gloyer-Taylor Laboratories (in Tullahoma, TN which is close to Huntsville, AL) is doing different, however, one time use or space applications are different from aircraft use which must take off and land many times a day over a period of 40 years. Stainless Steel works in a cryogenic environment and SpaceX is multi-use.

' GTL claims it's built and tested several cryogenic tanks demonstrating an enormous 75 percent mass reduction as compared with "state-of-the-art aerospace cryotanks (metal or composite)." The company says they've tested leak-tight, even through several cryo-thermal pressure cycles, and that these tanks are at a Technology Readiness Level (TRL) of 6+, where TRL 6 represents a technology that's been verified at a beta prototype level in an operational environment. '

Testing it through 'several' cycles is one heck of a way short of a proven system for regular use in airplane service, but you have to start somewhere, and it sounds hopeful, as does the weight reduction.

Technology Readiness Level (TRL) 6 is a long way from TRL 9 (Actual system "flight proven" through successful mission operations). The Composite Boeing 787 started testing in 2009, completed certification in 2013 and yet it is still having structural problems today.

But maybe a bit early to write it off completely?

' What could possibly go wrong?'

With the GTL system.

And even in my state of technological ignorance, I gave up when I reached around 999 after 7 minutes or so! ;-)

But just the same, presumably if they are putting these materials into prototype systems, the actual materials are in a much more advanced state of testing, for cold resistance, durability, and perhaps even cost of manufacture.

So I will go out on a limb, and say even if the particulars of the system proposed hit snags, then it would seem that there may be a genuine, much lighter, contender to stainless steel as the material to be used.

The Space Shuttle LH2 tank was mostly aluminum. However, it was only used once.
Here is a technical read on various materials:
https://mdpi-res.com/d_attachment/metals/metals-11-01101/article_deploy/metals-11-01101.pdf?version=1625918750
It appears that stainless steel still looks like the best, particularly if you want a long life.

Thanks for the link.
I read that as saying that for general use, steel is usually the winner.

However, for weight critical applications, such as space launches, and presumably aerospace in general, in the conclusion they say:

' In the field of space launch or space on orbit, lightweight storage and transportation containers are the future development trend, and composite materials are the most potential alternative material for liquid hydrogen storage and transportation containers. However, the basic theory, process, and low-temperature performance mechanism of composite materials are not mature enough, which also becomes the research direction that needs to be strengthened in the future.'

We know the field is immature, but that hardly sounds like a dismissal to me.

Thanks for the discussion and the info, which has clarified a couple of things for me.

It can help just about everything else though, from the provision of economic hydrogen to handling liquid hydrogen and its refueling, which surely includes refining valves etc.

Its clear just how blue sky Hypoint and GTL's systems are, but that don't mean that they are impossible, although very ambitious.

So thanks for some rays of knowledge, to somewhat lighten my ignorance on this, amongst a host of other technical issues of the day! ;-)

There is one application that the Hypoint/GTL system will work and it’s the fastest growing area in aviation - UAV.

Hypoint have been doing drones since 2020:

That was using low temperature PEMs, I am not sure if they have gone to HT PEMS yet in the application.