Researchers at the US Department of Energy’s (DOE) Princeton Plasma Physics Laboratory (PPPL) have found a way to build high-temperature superconducting magnets made of material that conducts electricity with little or no resistance at temperatures warmer than before. Such powerful magnets would more easily fit within the tight space inside spherical tokamaks, which are shaped more like a cored apple than the doughnut-like shape of conventional tokamaks, and are being explored as a possible design for future fusion power plants.

A paper on the work is published in IEEE Transactions on Applied Superconductivity.

Significant progress has been made recently in the US fusion community to develop a strategic plan to enable engineering design and construction of a fusion pilot plant (FPP). Princeton Plasma Physics Laboratory (PPPL) is working on developing high current density HTS conductors for next fusion experiments. Partnering with the US industry, we are evaluating feasibility and affordability of Conductor on Round Core (CORC) developed by Advanced Conductor Technologies (ACT) for the next compact fusion tokamak facility.

High current density achieved by a CORC cable based on a four-layer model coil recently tested at National High Magnetic Field Laboratory (NHMFL) motivated its consideration for low cost, reduced size fusion magnet application. This is of interest to PPPL because of its scalability to tokamak central solenoid (CS) coils in terms of required flux swings for plasma startup operations.

Partnering with ACT, we designed and built a two-layer model coil solenoid directly wound with CORC to demonstrate its applicability for compact solenoids such as that used in the national spherical torus experiment (NSTX), NSTX-upgrade (NSTX-U) and the US sustained high-power density test facility (SHPD). The ∼160 mm diameter solenoid wound by a two-layer CORC is being tested in early 2022 under electromagnetic cyclic loading at NHMFL in a unique 160 mm bore, 14 T background field magnet facility. 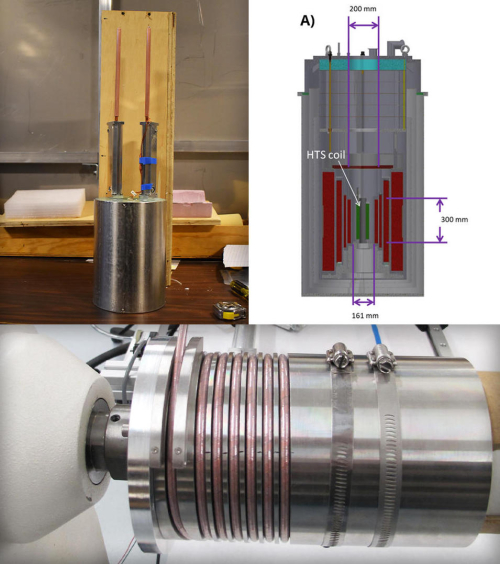 Images of a high-temperature superconducting magnet which could improve the performance of spherical tokamak fusion devices. (Collage by Kiran Sudarsanan)

Since the magnets could be positioned apart from other machinery in the spherical tokamak’s central cavity to corral the hot plasma that fuels fusion reactions, researchers could repair them without having to take anything else apart.

To do this, you need a magnet with a stronger magnetic field and a smaller size than current magnets. The only way you do that is with superconducting wires, and that’s what we’ve done.

—Yuhu Zhai, a principal engineer at PPPL and lead author

Fusion, the power that drives the sun and stars, combines light elements in the form of plasma—the hot, charged state of matter composed of free electrons and atomic nuclei—that generates massive amounts of energy. Scientists are seeking to replicate fusion on Earth for a virtually inexhaustible supply of safe and clean power to generate electricity.

High-temperature superconducting magnets have several advantages over copper magnets. They can be turned on for longer periods than copper magnets can because they don’t heat up as quickly, making them better suited for use in future fusion power plants that will have to run for months at a time. Superconducting wires are also powerful, able to transmit the same amount of electrical current as a copper wire many times wider while producing a stronger magnetic field.

The magnets could also help scientists continue to shrink the size of tokamaks, improving performance and reducing construction cost.

Tokamaks are sensitive to the conditions in their central regions, including the size of the central magnet, or solenoid, the shielding, and the vacuum vessel. A lot depends on the center. So if you can shrink things in the middle, you can shrink the whole machine and reduce cost while, in theory, improving performance.

These new magnets take advantage of a technique refined by Zhai and researchers at Advanced Conductor Technologies, the University of Colorado, Boulder, and the National High Magnetic Field Laboratory, in Tallahassee, Florida. The technique means that the wires do not need conventional epoxy and glass fiber insulation to ensure the flow of electricity. While simplifying construction, the technique also lowers costs.

The costs to wind the coils are much lower because we don’t have to go through the expensive and error-prone epoxy vacuum-impregnation process. Instead, you’re directly winding the conductor into the coil form.

High-temperature superconducting magnets can help spherical tokamak design because the higher current density and smaller windings provide more space for support structure that helps the device withstand the high magnetic fields, enhancing operating conditions. Also, the smaller, more powerful magnets give the machine designer more options to design a spherical tokamak with geometry that could enhance overall tokamak performance. We’re not quite there yet but we’re closer, and maybe close enough.

This research was supported by the US Department of Energy (Small Business Innovation Research and Laboratory Directed Research and Development).