Through continued development of its next-generation lithium-metal cell technology, Cuberg has achieved a near-doubling of cycle life of its cells alongside improvement in energy and power. Testing of 5 Ah pouch cells by an independent third party confirmed that cycle life has been extended from 370 to 672 cycles with 80% capacity retention. 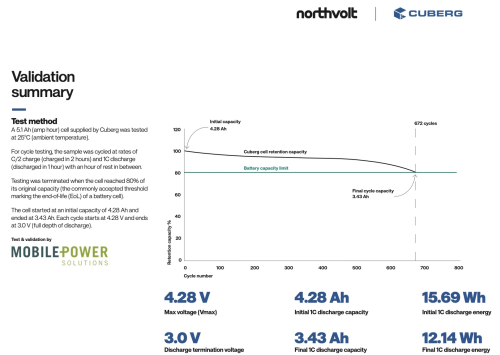 The results show that Cuberg has successfully developed the highest-performing and longest-lived lithium-metal cell in the world that has been independently validated in a commercially representative cell size (3+ Ah). For the first time, a lithium metal cell now exceeds the cycle life of the latest energy/power cells developed by leading lithium-ion manufacturers when tested in the same cycling conditions and with the same cell capacities. 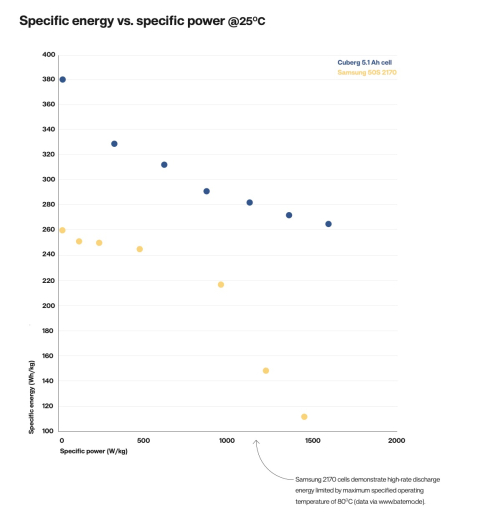 Cuberg is engaged with several customers from the aviation industry who require batteries that achieve high energy density, power, and cycle life simultaneously. Since Cuberg’s acquisition by Northvolt in March 2021, the company has significantly expanded its commercial engagements and has shipped thousands of cells to customers in the past year.

Cuberg’s first generation of cell technology was validated by the US Department of Energy in 2020 and reached 370 cycles with 80% capacity retention with a C/2 charging rate (2-hour charge) in a 5 Ah cell. The latest results reach 672 cycles with the same charging rate and 80% capacity retention limit in a 5 Ah cell format. Cuberg is now transitioning its technology to 20 Ah commercial-format cells for its aviation customers.

Cuberg’s cell technology has been designed as a drop-in successor to conventional lithium-ion technology. Importantly, it has been shown that conventional lithium-ion cell production equipment—such as that being established at scale by Northvolt—will be capable of manufacturing Cuberg’s cells with little adjustment. This contributes to faster and lower cost of scale-up of the technology while providing future upgrade opportunities for lithium-ion gigafactories being deployed around the world.