This marks the first loan from the Advanced Technology Vehicles Manufacturing (ATVM) Loan Program since 2011, and the first ATVM loan exclusively for a supply chain manufacturing project. 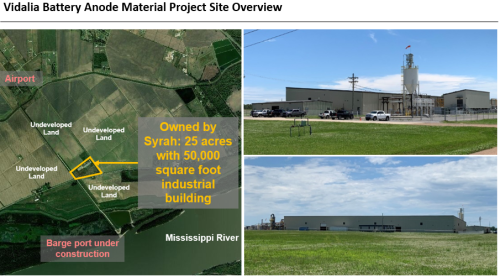 Syrah has executed a four-year offtake agreement with Tesla to sell the majority of AAM produced from the Syrah Vidalia Facility. The remaining capacity is expected to be sold to other auto and EV battery manufacturers.

With this expanded production capacity, the Syrah Vidalia Facility is expected to produce enough natural graphite-based AAM to support approximately 2.5 million EVs by 2040.

This latest loan closing supports the Department’s first comprehensive strategy to increase the domestic availability of the critical minerals and related materials for clean energy technologies.

Across all its programs, LPO has attracted 77 active applications for projects totaling more than $79 billion in requested loans and loan guarantees as of June 2022. With this loan closing, LPO now has $15.1 billion in remaining ATVM loan authority.