A team of researchers from CoorsTek Membrane Sciences and SINTEF in Norway, and Universitat Politècnica de València in Spain, has demonstrated a 36-cell well-balanced proton ceramic reactor stack enabled by a new interconnect that achieves complete conversion of methane with more than 99% recovery to pressurized hydrogen, leaving a concentrated stream of carbon dioxide. The team has also demonstrated that the process can be scaled up for commercial application.

A paper on the work is published in the journal Science. 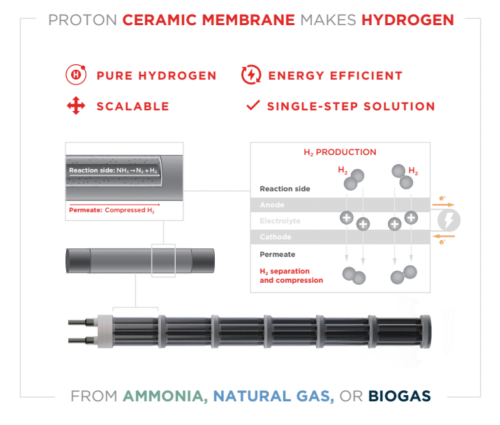 This figure shows the principles behind the new ceramic membrane used in the production of hydrogen. Figure courtesy of CoorsTek Membrane Sciences.

Currently established methods have energy efficiency ratings of between 70 and 75 percent, but our approach has a potential efficiency of 90 percent. The end product is compressed hydrogen with a high degree of purity. The ceramic membrane reactor also separates carbon dioxide more efficiently, enabling the greenhouse gas to be easily transported and sequestered.

This is an important step on the road to making hydrogen far more practical as a fuel. The process also has a low carbon footprint.

The research is being carried out at SINTEF’s facilities and laboratories in Oslo, which are co-located with CoorsTek Membrane Sciences’ premises.

The steam reforming technology used for producing hydrogen from natural gas is well known. A major problem associated with steam reforming is that the process is energy-demanding and takes place in several stages. It also has CO2 as a by-product. The new technology, on the other hand, requires no external heat to drive the steam reforming process. A key to the new process is that heat is produced automatically when the hydrogen is being pumped through the ceramic membrane. In this way the heat is generated exactly where it is needed.

The smallest building block used in the new method is an electrochemical fuel cell that consists of a six-centimeter long ceramic cylinder. The scaled-up membrane reactor measures 4 by 40 centimeters. It is made up of 36 such cells that are connected to form a continuous electrical circuit. The material that connects the cells consists of a glass-ceramic which, as the name suggests, is a composite of both glass and ceramic materials, such as porcelain.This material is then mixed with an electrically conductive metal powder.

According to CoorsTek Membrane Sciences, the development of this material has been key to making the scaling-up process possible. The reactor membrane is then placed in a steel tube that keeps the gases under high pressure.

On encountering methane (CH4), the proton ceramic membrane breaks the individual atoms down into their constituent protons and electrons. The positively-charged protons permeate through the membrane, while the electrons are captured on the electrodes and transported around the membrane via an external electrical circuit. When the protons and electrons are reunited on the other side of the membrane, the product is pure, compressed hydrogen.

The technology behind this new ceramic membrane reactor for hydrogen production has been developed by researchers at CoorsTek Membrane Sciences, the University of Oslo and Instituto de Tecnologica Quimica in Valencia, Spain. SINTEF’s role in the project has been to test the reactors and to look into how this new hydrogen production concept can be integrated into a larger energy system.

The next stage in the development of this technology is already well underway. A pilot facility has been established in Dhahran in Saudi Arabia. The generator installed at this facility, which is five times bigger than the one described in the Science paper, has also been shown to work.

We’re certain that this technology can be scaled up even further. Our hope is that the first industrial installation of a commercial hydrogen production system can take place in the next two to three years.

SINTEF is continuing to collaborate with CoorsTek Membrane Sciences on the development of larger membrane reactors, and both organizations are working on other projects related to materials technology.

The research is being financed by ENGIE, ExxonMobil, Equinor, Saudi Aramco, Shell and Total Energies. The project is also being funded by Gassnova as part of the CLIMIT CO2 management research program. The research is being carried out under the Open Innovation model, by which all project partners have full access to all data generated during the project.

I really don't understand the logic of trying to ship liquid hydrogen about, save perhaps at very small scale.

Here is an analysis of shipping costs for liquid hydrogen, LNG, methanol, DME and ammonia:

Ammonia is the winner, although some others, not liquid hydrogen, are not too bad.

I like LOHCs, and they are certainly easy to transport about, without some of the issues of toxicity of ammonia

However, Hydrogenious show their LOHC at 6.23% hydrogen by weight here:

That compares to 17.65% for hydrogen in ammonia by weight, which makes me suspect that it is way cheaper to ship ammonia about than LOHCs, also.

And there is considerable existing infrastructure for ammonia.

Ammonia does look good, particularly for Maritime.
https://spectrum.ieee.org/why-the-shipping-industry-is-betting-big-on-ammonia
However, Methanol is also a good bet if you capture the CO2. Not sure how this reformer compares to the reformer developed for the HyMethShip Project.

This would allow a train with the PEM to reform LNG

That is not the end of the story, of course, as the hydrogen still has to be liquified and distributed, and in any case the issue with green hydrogen in Europe is we need a massive build up for multiple demands.

But the argument that LNG prices will fall back is weakened by green hydrogen costs being on an ever falling trajectory.

I can't see European train companies as likely to switch their preferred future fuel when the cheapest source of LNG is to liquify Russian gas.

I would imagine that the shipping industry is focused on the high hydrogen loading of ammonia and the existing infrastructure.

Methanol and DME both run at around 12-13% hydrogen by weight, but have several other advantages relative to ammonia.

China is using a fair bit of DME in trucks.

Here is an in-depth article on DME as an energy carrier:

They fancy burning it in conventional engines, which I don't really find too persuasive, but perhaps I am simply becoming a bit overwhelmed by the sheer number of possible pathways forward in this very exciting seminal time for energy technology.

It reminds me a bit of the early days of designing steam engines, when all was wonderful, there were umpteen projects floated, many of them downright weird!

You can make RNG with cornstalks and livestock

Yeah, there are loads of possible pathways, so many that I lose track.

The usual issues with biomass are land use and displacement of food products, but some pathways mitigate that.

On the upside, huge amounts of resources are currently chucked away, often at a high cost to the environment, so for instance a lot of biogas from large scale pigfarms and so on is just another pollutant instead of used for its energy.

Here is NYC a couple of years ago, discussing the issues:

@Davemart’
You said: “Ammonia is the winner”. This reformer works with Ammonia and could be the best bet for Ships and Rail.
Cummins plans hydrogen future—with trains coming before trucks, MAN and others are looking into Ammonia engines for Ships by 2024. Just make sure it is “Green Ammonia”.
https://www.cummins.com/news/2020/11/24/cummins-making-a-splash-with-these-hydrogen-headlines

I'm not sure that Cummins are planning trains before trucks, as they are also putting ICE hydrogen engines into trucks:

' The development of the 6.7-liter hydrogen engine will focus on medium-duty truck, buses, and construction applications, such as excavators and wheel loaders. A new 15-liter platform offers the potential to bring hydrogen gas-fueled engine capability to heavy-duty long-haul trucks. '

They are also developing PEM etc as the article says.

Their answer appears to be so far as is practicable 'All of the above' which in my view is sensible with the present immature state of the technologies, and transition issues, so that in this case retaining a lot of the parts in conventional engines, and enabling retrofitting etc is a plus, likely not a forever solution, but a bridge.

That is the same philosophy as Toyota, with whom I am profoundly in synch

Their objectives are, and have been for decades, to get to sustainability, and they will are determined to be a major player in transport whatever is powering it.

So for them too: 'All of the above'

The winners will make themselves known as things develop.

I did not remember that it was Cummins who provide the fuel cells for the in service Alstom trains, so they certainly have trains before trucks!

But they are keen on hydrogen in trucks too, ICE and fuel cells.

' These new fuel-agnostic engine platforms will feature a series of engine versions that are derived from a common base engine, which means they have a high degree of parts commonality. Below the head gasket of each engine will have similar components and above the head gasket will have different components for different fuel types. Each engine version will operate using a different, single fuel.

This is an industry first. These are the first engine platforms to be intentionality designed with commonality in mind for both the engine footprint and components across fuel types.

This technology approach will be applied across Cummins’ X-Series, L-Series and B-Series product platforms, which will be available for diesel, natural gas and hydrogen, and will springboard the ability of our customers to customize their transitions to zero.'

You put cornstalks and livestock effluent in tanks underground,
no extra land required to make billions of therms of RNG.

Its a source of great hope to me that we don't have to be clever, just stop being so dumb and wasteful!

Europe is doing a lot of RNG
https://www.transportenergystrategies.com/2022/01/25/rng-in-the-eu-a-look-at-member-state-developments/

The problem with biogas is that about 40% of the gaseous product is CO2, not CH4.  That doesn't include the carbon which winds up in the liquid effluent.  When the carbon in the input is the main constraint on the ability to displace fossil fuels, any loss of carbon needs to be looked at very closely.

Which has exactly squat to do with the carbon economy of biogas systems.