Archer Aviation successfully completed all of its “critical azimuth” flight tests, marking the completion of the second of three key phases of flight testing. The purpose of these tests are to validate the crosswind capabilities of Archer’s eVTOL aircraft configuration and flight control systems. The company has now successfully flown Maker at increasing speeds of up to 15 knots, in various directions and attitudes. 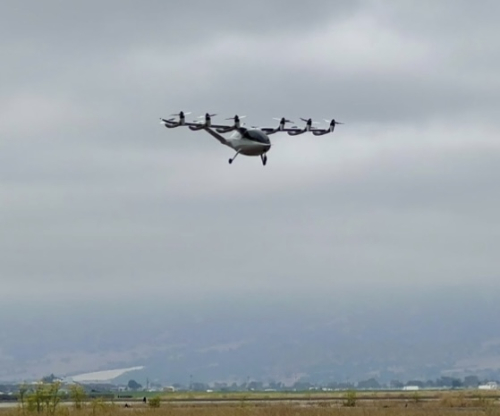 Maker completed its first hover test flight in December of last year. Following extensive ground testing, and the addition of Archer’s new tilt propeller system, the aircraft returned to flight testing earlier this year and has been flying almost daily of late, allowing the Archer Flight Test Team to evaluate incremental speed increases and complex maneuvers while in hover. The culmination of these tests also demonstrated the robustness of the aircraft’s takeoff and landing capabilities.

Archer’s flight test campaign has been designed to evaluate carefully the company’s systems and technology. The rapid progress made by the company with Maker has allowed the validation of a number of technologies for Archer’s production aircraft. Having successfully validated various systems through this second phase of flight testing, Archer is now shifting into the third phase of its program during which it will evaluate the aircraft’s performance at increasing forward speeds. At the current rate of progress, the company continues to anticipate expanding to full transition flight by the end of the year.

Archer’s production aircraft will operate in dense urban environments making critical precision from the aircraft’s flight controls and actuators a must. Honeywell’s actuators can accept hundreds of micro adjustments and commands per second from fly-by-wire computers, enabling precise navigation.

Archer works to incorporate the latest advancements in technology into its aircraft to draw on its safety benefits, as well as accommodate the unique elements of its eVTOL aircraft. As such, Honeywell’s thermal management system that Archer has selected, MicroVCS, provides several advantages compared to the conventional systems, including lower weight, higher efficiency, and higher reliability in its size and power class.

I had a look on their site:

I can't spot anything enabling a critical evaluation, from what batteries they are using, to noise profiles or anything else

If it is being tried in the American legal system, anything can happen.

So far, so bitchy.

Wisk should win it's illegal to steal designs

I just got home from visiting EAA's (Experimental Aircraft Association) airshow in Oshkosh, Wisconsin. The only demo of a eVTOL was by the Opener Blackfly. See: https://opener.aero/ This is more of a personal toy. Joby was there but did not have an operating aircraft. I think that Joby's design is better than the Archer as it does not carry any extra motors or propellers. It is also further along in development. See: https://www.jobyaviation.com/ One thing is sure and that is that there will be a big shake out in this market as there is far too much hype, too much money and too many players.

BEA(Battery Electric Aircraft) will be first in the air; however, I like green hydrogen, not grey hydrogen, in the long run for airliners b/c H2's pollution is only H2O and it offer a more flexible driveline and a lighter, more energy dense fuel.

Aircraft batteries have a long way to go to reach the 600 Wh/kg energy density necessary to make BEA feasible. Some believe they will never reach that energy level.
At the same time there's a lot of research and development underway to adapt H2 as a jet engine fuel in place of Avfuel for takeoff power and to develop fuel cell power for aircraft steady flight.

@Lad
The Beta Technologies Alia-250 is already flying and plans to get FAA certification in 2024. Recently, the Alia flew from Plattsburgh, New York To Bentonville, Arkansas.
The Alia has a 250 nautical mile range and currently is operating CTOL. The next phase of testing will be for VTOL.

The Alia-250 is optimized for CTOL and uses retracting rotors for VTOL.
References:
https://www.flyingmag.com/electric-aircraft-flies-nine-legs-across-six-states/
https://evtol.news/news/beta-alia-250-prototype-flies-cross-country-to-arkansas

Lad: Lyten ( https://lyten.com/ ) is supposed to have a pilot line producing LiS batteries this fall. They are promising ~900 Whr/kg which should be enough to build short haul and regional aircraft. Even if they can double this (theoretical power density is ~2500 Whr/kg). it is unlikely to be enough for transcontinental flight. However, I think that hydrogen flight is still unlikely as sustainable aircraft fuel (SAF) will be more likely and maybe ammonia which would produce only N2 and H2O.

Gryf: Thanks for the link to Alia.

What really sticks out is:

"Beta reported its cost for an electric recharge was $19 for a 160 nm leg of the voyage. Compare that with the mission’s Cessna Caravan chase airplane, which required $800 in fuel for the same leg. The Alia is designed to fully recharge in less than an hour."

This is exactly why Battery Electric flight is going to happen.

' The Alia-250 is optimized for CTOL and uses retracting rotors for VTOL.'

? Surely not retracting, they are just testing for horizontal flight at the moment and have not fitted the lifting rotors.

They plan to run test on lifting separately, then combine the two!

They run just fine on current batteries, and all specs are from those, not some future battery, although sure, improvements would be welcome.

The specified range of 250km is not because most missions will need that range, in their early targets of cargo transport, but because they have to be capable of, say, 100km reliably, in any weather, with headwinds etc.

Unlike for diesel planes, the weight is already built in, and you don't increase it by 'fueling up', so every flight will take off fully fueled.

The lift rotors move to a neutral for and aft position in flight rather than retracting.

I think Toyota have made the wrong bet in Joby, and this is a much better, much simpler, system.

Toyota's solid state batteries would do an awesome job in it.

Here is another video by Kyle Clark, not on electric aircraft, but on 'leading from behind':

I am comfortable in saying that the guy is a genius, not something I often say or feel.