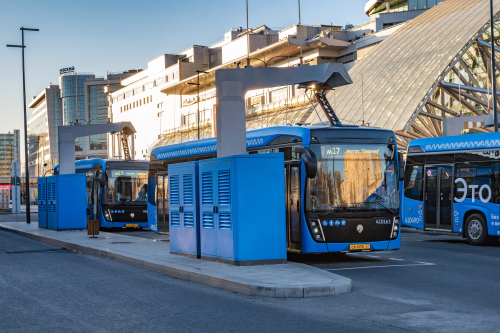 The electric buses can be fully charged in 6-10 minutes—enough to ride 40-50 km. The charging stations are unified; they are suitable for the charging of the electric buses by different manufacturers. Modern lithium-titanate batteries are used as energy storage devices in the electric buses. The temperature range of its work is from -40 to +40 degrees Celsius. Thus, they can work in any weather all year round.

The development of environmentally friendly surface public transport is under the special control of the Moscow Mayor Sergey Sobyanin. We are now replacing diesel buses with electric ones and preparing the necessary infrastructure. This year we are going to implement 115 ultra-fast charging stations in the city. Today, more than 1,000 e-buses serve 78 city routes.

Moscow is increasingly focusing on environmentally friendly transport.In 2021 the city Government refused to purchase diesel buses. Today the city already has the largest electric bus fleet in Europe in terms of the number of electric buses produced in Russia, especially at the SVARZ eco-plant. Two new articulated electric buses are currently being tested in the city.