This funding adds to additional funding by the Natural Sciences and Engineering Research Council of Canada (NSERC) that the team received earlier this year.

As the world looks to quickly decarbonize transportation and industry, hydrogen demand is expected to increase rapidly, from $130 billion today to $2.5 T in 2025, according to the Hydrogen Council. There is an accompanying need to develop new low-cost and low-carbon technologies for hydrogen production. Aurora Hydrogen is scaling its proprietary and highly efficient microwave pyrolysis technology to produce hydrogen and solid carbon from natural gas without generating CO2 emissions or consuming water. 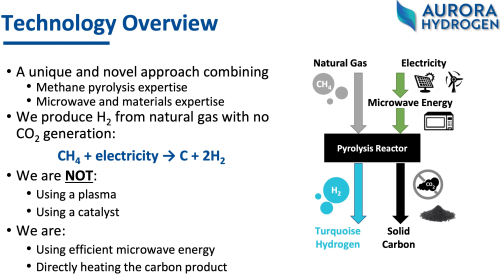 Aurora’s technology is highly scalable, with units that can supply a broad range of applications from distributed fueling to hydrogen injection and industrial processes.

At Aurora, we are producing low-cost hydrogen at the point of use, at the exact scale required, and without generating any CO2. We use existing energy pipelines and distribution systems to move the energy, then produce hydrogen where it’s needed, eliminating the need for any new costly hydrogen transportation infrastructure.

The recent funding will be used to build and operate a 200 kg-H2/day demonstration plant for field trials in Edmonton, Canada.

To replace Russian natural gas for Europe Saudi Arabia is starting these giant projects, comprising both natural gas with storage in local salt caverns for the CO2, and pipelines either NG or hydrogen through Greece and southern Europe:

In addition, renewables projects in Morocco are to lay DC current cables through to the UK - manufacture of the cables has started:

' The solar, wind, and battery storage project will cover an area of 579 square miles in Morocco, and connect exclusively to the UK site, following a shallow water route from Morocco past Spain, Portugal, and France to the UK. Xlinks said the project will cost $21.9 billion, and include 7 GW of solar generation capacity and 3.5 GW of wind generation capacity, in addition to 5 GW/20 GWh of onsite battery energy storage.

The first cable is expected to transport electricity from the Morocco site in early 2027, with the other three cables scheduled to begin transporting power in 2029.'

Again, there is a lot of religious warfare about the 'best' way of transporting power and gas, NG or hydrogen.

In practical terms, it is all case by case.

From Morocco to the UK there is convenient shallow water, making a DC cable a good option., and Morocco's combination of wind and solar means that the power is less intermittent than many renewable sources, so needing less buffering by means of chemical storage.

For other routes pipelines work best.

If you are going to make hydrogen from natural gas, pyrolysis is probably the best technique as solid carbon is easier to sequester than CO2 and some can be use for existing purposes such as black paint pigment, tires, electrodes, etc. Unfortunately someone will probably decide that it is cleaner to burn than coal and it will end up becoming CO2.

The best way to transport power is not to transport it very far at all but to generate it close to where is needs to be used. Hopefully, we will get smarter about building small modular nuclear plants. If I had a sufficiently large backyard, they could build one in my backyard.

LOL, Greenwashing at it's finest

Pyrolysis has a lot of advantages.

If the anti nuclear movement had not exaggerated risks of nuclear by several orders of magnitude, we would not have emitted nearly as much CO2, and hundreds of thousands of lives a year could have been saved in coal mining.

I would love to see SMRs finally taking their place in the energy landscape, as for starters they use way, way less materials than renewables, and provide security against massive volcanic eruptions impacting solar, giving some baseline power.

But I have been staggered by the fall in cost of renewables, and in the areas where most of the planet's population are going to live in 2050, where there are almost universally high solar incidence, it is difficult to see economic competition.

A major reservation of mine against solar has been land use, but agrivoltaics has answered that, and in an ever hotter climate solar arrays can provide useful shade for crops and better moisture retention.

So getting costs to competitive levels for SMRs will be tough, but hopefully do-able, certainly in northerly Europe.

We have recently been confronted by some of the disadvantages of a wholly interconnected economy with Russian actions.

I find it difficult to understand the wisdom of Nancy's trip to Taiwan, which does not seem in accord with the realities of a manufacturing and materials base which has been largely exported to China.

Put simply, it seems to me that they are the likely winners in conflict, as they can strangle our economy.

So I would like to see some degree of autarchy, with perhaps nuclear in Europe providing base line capacity for, for instance, fertiliser production.

But if you are talking about renewables, it is inescapable that the easiest way to massively increase the output of a solar panel is to put it in Saudi Arabia etc rather than Germany.

So IMO a very large trade in transporting products like ammonia will continue, and expand, with production centered in areas with very good wind and solar resources.

We can and should provide for some level of basic production in Europe.

The US should be able to do fine, in any scenario, short of a Yellowstone eruption!

To remove all doubts: The following survey is peer-rerviewed, so to say from external scientist tested and asserted to be true and serious.
A H2 molecule is eight times smaller than a methane molecule and elucidates very impressively that existing NG pipelines are completely unsuited for transportation of H2.
Subsequently, leaking H2 is a serious problem and not solely a concern of safety for the distance covered from the pipeline to the gas stove..
When considering a century time lapse, the climate influence of H2 is 11x more intensive than CO2; a time lapse over 20 years has a 33x higher effect.
This is an indirect effect because H2 reacts exceedingly rapid with other GHGs and thus contributes to climate temperature rise and all other perceptible effects.
This is a further reason to treat the planned employment of H2 on a greater scale with extreme caution. The subsequent conclusion would be to produce H2 on that location where it is to be used and avoid long distance transportation.

Do learn how to link the actual paper you wish to cite instead of the organization which you reckon produced it.

And do try to learn to differentiate between absolutist claims and reasonable doubt.
So:

' The researchers in the white paper highlight the challenges of decarbonising the existing gas infrastructure. These include uncertainties around the technical capabilities in the existing gas networks in terms with being able to safely transport hydrogen. More work also needs to be done to explore the level of decarbonisation achievable, and the overall costs of converting the entire network to either biomethane or hydrogen or both.'

To present this uncertainty as some papal bull of impossibility beyond doubt is nonsense.

This might work and with $100/bbl oil it could make Sustainable Aviation Fuel (SAF) cost competitive. Also, no infrastructure needed, just make sure the NG pipeline does not leak.
This “will be used to build and operate a 200 kg-H2/day demonstration plant for field trials in Edmonton, Canada. “ Chevron one of the funders is a big supporter of SAF and is partnering with GEVO on their alcohol-to-jet fuel process (Read:

Also, note use of “ Gevo experimental fuel that we made from the cellulosic fiber of wood waste, providing a pathway and proof that waste woods can be used to make sustainable aviation fuel” here:
https://investors.gevo.com/news-releases/news-release-details/alaska-airlines-and-gevo-enter-sustainable-aviation-fuel-sales

Remember that the Carbon could be used in the Anodes of batteries, so no waste.