EIA: At least 9 new refinery projects to come online before end of 2023 in Asia and Middle East; 2.9 MMb/d

In Asia and the Middle East, at least nine refinery projects are beginning operations or are scheduled to come online before the end of 2023, according to the US Energy Information Administration (EIA). At their current planned capacities, they will add 2.9 million barrels per day (MMb/d) of global refinery capacity once fully operational. 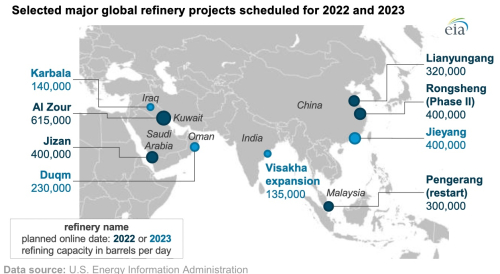 In the International Energy Agency’s (IEA) June 2022 Oil Market Report, the IEA expects net global refining capacity to expand by 1.0 million b/d in 2022 and by an additional 1.6 million b/d in 2023. Net capacity additions reflect total new capacity minus capacity that has closed.

The scheduled expansions follow a period of reduced global refining capacity. Net global capacity declined in 2021 for the first time in 30 years, according to the IEA. The new refinery projects would increase production of refined products, such as gasoline and diesel, and in turn, they might reduce the current high prices for these products.

China’s refinery capacity is scheduled to increase significantly this year. The Shenghong Petrochemical facility in Lianyungang has an estimated capacity of 320,000 b/d, and they report that trial crude oil-processing operations began in May 2022.

Outside of China, the 300,000 b/d Malaysian Pengerang refinery (also known as the RAPID refinery) restarted in May 2022 after a fire forced the refinery to shut down in March 2020. In India, the Visakha Refinery is undergoing a major expansion, scheduled to add 135,000 b/d by 2023.

New projects in the Middle East are also likely to be an important source of new refining capacity. The 400,000 b/d Jizan refinery in Saudi Arabia reportedly came online in late 2021 and began exporting petroleum products earlier this year. More recently, the 615,000 b/d Al Zour refinery in Kuwait—the largest in the country when it becomes fully operational—began initial operations earlier this year.

These estimates do not necessarily include all ongoing refinery capacity expansions,EIA noted. Moreover, many of these projects have already been subject to major delays, and the possibility of partial starts or continued delays related to logistics, construction, labor, finances, political complications, or other factors may cause these projects to come online later than estimated.