Russia-based Udokan Copper, the developer of Russia’s largest new copper deposit, outlined scenarios to cut the carbon intensity of copper production up to 75% by 2035, bringing the company closer to its ultimate goal of climate neutrality in the long run. The mine is part of the Udokan Ore Region that includes the Udokan, Kalar and Kodar ranges.

Udokan Сopper is developing and implementing programs aimed at reducing energy consumption and reducing environmental impact as it prepares for the production launch. The company’s plan to decrease carbon emissions involves the possibility of purchasing low-emissions electricity from power sources such as hydro, wind and solar, as well as its own power generation from renewable sources. It will also study opportunities to switch from coal to less carbon-intensive fuels for heat generation as well as electrification of the mining fleet.

In 2021, Udokan Copper invested RUB 764 million (US$11.5 million) in environmental measures and social programs as the company prepared to start production at the deposit.

Udokan Copper (earlier known as Baikal Mining Company) was established in 2008 to develop the Udokan copper deposit. It is part of the diversified USM holding company. The Udokan Copper deposit has copper resources exceeding 26 million tons. The copper grade in accordance with the JORC Code is 1.05%.

The deposit is located in the Kalar District of the Zabaikalye Territory in the southeast of Siberia, 30 km from the Novaya Chara station of the Baikal–Amur railway line. The project will commission a mining and metallurgical plant, with the final products being cathode copper and sulfide concentrate. Udokan ores will be processed using a unique flotation and hydrometallurgy scheme. 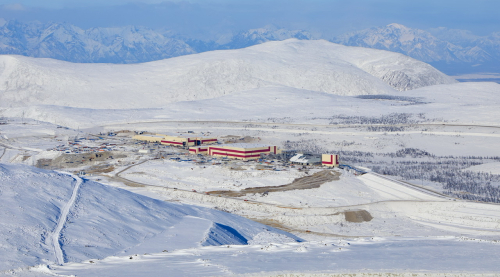 The first stage of the plant will deliver up to 135 thousand tonnes of copper per year. The life of the mine is estimated to be 70 years.