EIA expects a 2.4% increase in total US electricity consumption in 2022

The US Energy Information Administration (EIA) expects US electricity consumption this year to increase 2.4% over 2021, resulting primarily from increased economic activity but also from hot summer weather throughout most of the country.

According to the agency’s August 2022 Short-Term Energy Outlook (STEO), growth in renewable energy will meet most of the increased electricity demand this year. The United States has also consumed more natural gas to meet electricity demand so far this summer than the previous five-year average. 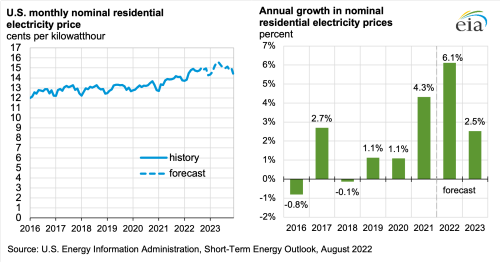 Other key takeaways from the August 2022 STEO forecast include: