A team from the German research institute ZSW (Zentrum für Sonnenenergie- und Wasserstoff-Forschung Baden-Württemberg) and advanced materials company E-magy have shown a less than 1% battery cell expansion in a silicon-dominant lithium-ion battery for the first time. An open-access paper describing the findings is published in the Journal of The Electrochemical Society.

Using silicon as the anode material enables significant increases in battery energy density. However, silicon’s volumetric expansion during cycling and the resulting structural degradation has thus far been the main barrier to industry adoption. E-magy has developed a nano-porous silicon which absorbs the expansion in the nano structure itself.

With E-magy’s nano-porous silicon, batteries are made with only silicon as the active anode material, boosting the energy that can be stored in a single battery. The battery industry considers an overall cell expansion of less than 10% acceptable; E-magy’s silicon achieves 0.9%. 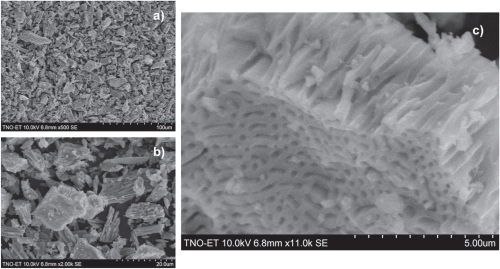 E-Magy advocates the use of silicon-dominant anodes, in which 80% or more of the material in the anode is silicon. With this composition, batteries will gain a 40% increase in energy density compared to conventional graphite anodes.

To examine the volume expansion of E-magy’s silicon, silicon-dominant anodes were paired with NMC cathodes to build bi-layer pouch cells. The pouch cells were placed in custom-made cell holders for dilatometric measurements and subjected to 100 charge/discharge cycles. This enabled the monitoring of thickness variation of the pouch cells during the cycling test. 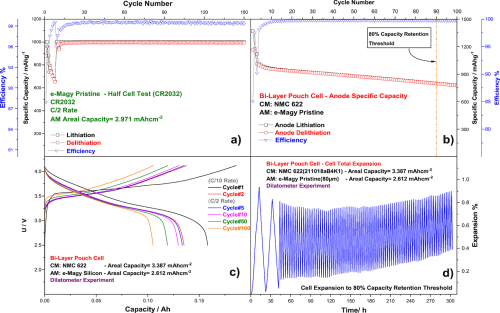 ' batteries will gain a 40% increase in energy density compared to conventional graphite anodes. '

I wish that stated whether they are talking about volumetric or specific energy density.

Looking at the paper, the microporosity seems to be around 35%:

' Electrode porosity has been estimated at ∼64%. Of note that the porosity of
the Si material itself is of ∼35%'

I am assuming from that, possibly wholly mistakenly, that the microporosity of this silicon is around 35%, ie it occupies 35% more volume than a solid silicon anode would.

So as regards volume, it would seem if that wholly inexpert reading is right, that there is no overall reduction in volume.

However, of course, not only is it a very different matter for the weight of the battery versus one with graphite anodes, but it won't fail due to the expansion of the silicon.

Have I got that right, that the volume reduction is taken up by the microporosity, or is that a misreading due to ignorance?

@Davemart
Typically, Silicon Anodes have volume expansion up to about 400%. So this is a big accomplishment. As you pointed out “ Electrode porosity has been estimated at ∼64%. “ Also, “the porosity of the Si material itself is of ∼35%”.
Yes, the volume reduction is based on the microporosity.
The energy density of the full cell will depend on the cathode. Amprius 100% Silicon Anode batteries have 450 Wh/kg, no doubt using NMC cathodes.
Where this will be valuable will be in LFP batteries that would have long life and probably reach 250 Wh/kg at low cost.

I hope I did not sound as though I were dissing this advance, I think it very encouraging, but was trying to get a better handle on what they were saying