The California Energy Commission (CEC) adopted a report establishing offshore wind goals and moving the state one step closer to development of the clean energy resource off California’s coast. Preliminary findings in the report set planning goals of 2,000-5,000 megawatts (MW) of offshore wind by 2030 and 25,000 MW (25 GW) by 2045, enough electricity to power 3.75 million initially and 25 million homes by mid-century.

There are currently two federally-designated wind energy areas (WEAs) off the cost of California: Humboldt off the North Coast and Morro Bay off the Central Coast.

The California North Coast wind resource is one of the best in the world with high renewable energy potential and wind speeds consistent and favorable for commercial development, the report notes. However, the electric system in California’s North Coast region is relatively isolated from the California grid and serves primarily local community need.

Additional transmission infrastructure will be needed to deliver offshore wind energy from this region to the grid. Existing transmission on the Central Coast is robust and near large load centers. Near-term electric generator retirements, such as 2,225 MW from the Diablo Canyon Nuclear Power Plant, provides an opportunity to repurpose existing infrastructure to integrate wind energy developed offshore the Central Coast, the report says.

However, there is still a need to do long-term planning for the subsea infrastructure and the ability to use existing onshore infrastructure.

To date, most offshore wind energy projects have used fixed-bottom foundations, which are more suitable for shallow waters of 60 meters (about 200 feet) or less. The deep waters of the Pacific Outer Continental Shelf off California’s coast have steep drop-offs and will require offshore wind turbines installed on floating platforms to be anchored to the seabed. 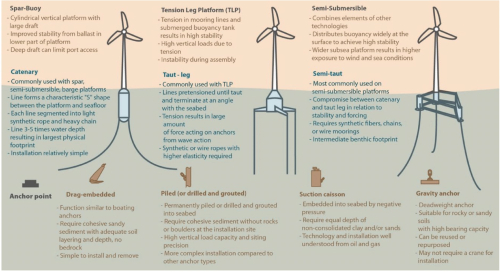 The CEC developed the report in coordination with federal, state, and local agencies and stakeholders including Tribal governments, fisheries and other ocean users. It is the first of several products the CEC must prepare to create a strategic plan for offshore wind energy development as required by Assembly Bill 525. It reflects the latest available research on technical potential.

CEC staff will next study the economic benefits of offshore wind in relation to seaport investments and workforce development needs. Staff will also create a roadmap to develop a permitting process for offshore wind energy facilities and associated electricity and transmission infrastructure. The entire plan must be submitted to the Legislature by June 2023.

Last year, Governor Gavin Newsom signed an agreement opening the West Coast for development for the first time. As a result of the partnership, in May, the Bureau of Ocean Energy Management released a proposed sale notice for offshore wind leases off the northern and central coasts in areas designated as most suitable for commercial wind energy activities near Humboldt and Morro Bay.

Plans for renovations to prepare for offshore wind activities are already underway at the Port of Humboldt Bay with $10.5 million in funding approved by the CEC earlier this year. Governor Newsom’s 2022–23 budget proposal builds on this effort and proposes an additional $45 million for other needed upgrades at waterfront facilities.

California has the 'problem' that it has a lot of cheap alternatives.

Here is a report on floating offshore wind, and it has to be floating due to water depths:

' California offshore wind facilities would necessitate the use of floating turbines due to the state’s deep coastal waters. Because of the nascent nature of this platform technology, the most recent NREL reports estimate that the current LCOE of floating OSW is about $113/MWh, and that the first offshore farms in California will arrive at an LCOE of about $92/MWh in the early-mid 2020s. The LCOE is projected to
decrease to $53-$64/MWh in 2032 (Beiter et al., 2020c). For comparison (see Figure IVA), solar-PV and onshore wind currently are at around $29-42/MWh and $26-54/MWh, respectively (Lazard, 2020).
Natural gas combined-cycle generation has an LCOE range of about $44-73/MWh, and gas-peaking plants have an LCOE range of about $151-198/MWh. Floating wind farms are therefore at the moment only cost competitive with natural gas peaking plants, and still fall short of equalizing the energy costs of combined-cycle gas plants, as well as solar and onshore wind farms. However, it will become more economically viable in early 2030s.
Despite the expectation of relatively high costs for floating OSW farms with CODs in the early-mid 2020s, by late this decade and early into the next, technological innovations in turbine size, as well as increased wind farm scale and industry standardization, could substantially reduce the cost differential between offshore wind and land-based renewables. This could help OSW play a large, complementary
role in the state power mix (Collier et al., 2019).'

The leader in the field is the UK, as it has both excellent resources, and solar resources which could charitably be described as 'lousy'. Here is an analysis focused on European resources:

' Furthermore, this work presents an analysis of the different costs incurred in the lifetime of the project using expressions depending on site-specific variables, i.e., water depth and distance to shore. The results highlight the paramount influence of the energy production and, therefore, the wind resource on the final cost of energy. The lowest LCOE values (∼95 €/MWh) correspond to the areas where the wind resource is most abundant: off Great Britain and Ireland, in the North Sea and off NW Spain. The influence of the resource leads inevitably to LCOE values somewhat higher off Portugal and Norway (∼125 €/MWh), and much higher in the Gulf of Biscay and south of the Iberian Peninsula (>160 €/MWh). Within regions with a similar resource, e.g., the North Sea (LCOE in the range 95–135 €/MWh), the distance to shore is found to be the main variable affecting the LCOE. By comparison, the costs related to water depth (primarily, mooring costs) are of little significance – unlike with bottom-fixed technologies.'

And here is a report showing the shear scale of the projected deployments in the UK, showing that that area is likely to be the main driver of floating offshore development, due both to an excellent resource and the paucity of renewables alternatives, solar and onshore wind ( nowhere to put them)

' The 75GW scenario assumes installed FOW capacity of 8.1GW by 2040, at an average annual rate of
730MW per year from 2029. The 75GW scenario is stop-start in nature and may not provide the continuous
pipeline required by supply chain and project developers to invest, scale up and skill up, particularly when
the regional distribution of projects is considered
• The 100GW scenario assumes 16GW could be deployed by 2040 with an average annual rate of 1.3GW
per year from 2028 (increasing to 1.5GW per year by 2035 and up to 3GW per year in 2040). This provides
a smooth deployment trajectory, and utilises almost the full identified pipeline (of most cost-effective
development areas identified in this study)
16 ORE.CATAPULT.ORG.UK
• The 150GW scenario assumes the same FOW deployment profile as the 100GW scenario to 2040, with
accelerated deployment in the 2040s. This is expected to include a higher proportion of non-grid connected
projects, used as a power source for hydrogen production.
Note, the role of FOW in the 100GW (40% FOW) and 150GW (60%) scenarios is significant and highlights the
importance of FOW for the UK should >100GW of offshore wind be required to deliver net zero. Achieving
100GW or 150GW of offshore wind will require significant developments in the wider energy system, including
large-scale hydrogen production and increased inter-connection.
A single FOW development scenario has been assumed for global deployment, reaching 9GW deployed in 2030
(including the UK) and 71GW in 2040.