Joby Aviation, a California-based company developing electric vertical take-off and landing (eVTOL) aircraft, announced an expansion of its existing contract with the US Air Force’s Agility Prime program that increases the contract’s potential value by more than $45 million.

Agility Prime, launched in April 2020, is the Air Force’s collaborative initiative to work with the industrial base on testing and experimentation, accelerating development of the commercial eVTOL aircraft industry, enabling resilient distributed logistics and sustainable mobility.

Through the Department of the Air Force Small Business Innovation Research (SBIR) and Small Business Technology Transition (STTR) programs, run by AFWERX AFVentures, the program works with the small business community to advance the eVTOL industry.

Building on more than five years of engagement with defense agencies, the expanded contract leverages Joby’s years of research and technology development and will include new testing to evaluate Joby’s advanced technologies. It brings the potential value of the total contract to more than $75 million. 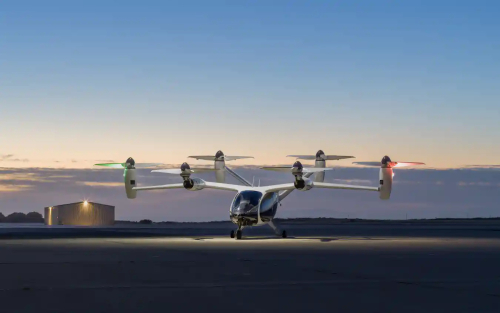 The contract also widens the Company’s defense partnerships to include the US Marine Corps, which will participate in government-directed flight tests and use case exploration, including resupply, relocation of personnel, and emergency medical response applications.

Joby’s engagement with government partners bolsters the company’s primary goal of launching a commercial passenger service by providing access to testing facilities, early operational experience for government customers, and a partial offset to our research and development costs.

On 3 August 2022, Joby attended the White House Summit on Advanced Air Mobility, which convened industry, government agencies, and military personnel to discus how to advance US leadership in this critical, new technology area.

With the expansion of Joby’s contract, the Army, Navy, Air Force, and Marine Corps have all now identified eVTOL aircraft as a critical area of interest.

In 2020, Joby became the first eVTOL developer to receive military airworthiness approval for its pre-production prototype aircraft. With a maximum range of 150 miles, Joby’s piloted, emissions-free aircraft can transport four passengers at speeds up to 200 mph with a quiet acoustics profile.

Heavy and complex rotating fans at the extremities don't fill me with confidence.

We had an informative conversation about their design here, with links to test flight video's etc:

Even if they get their battery up to enough energy density, which seems to be a battle, then their 150 mile max range with no battery swapping is very limiting.

As other developers remark, what happens when their is a headwind etc?

Or the batteries lose some capacity due to aging?

Of course, Toyota's solid state may slot in, and make it more practical, and Toyota production expertise should never be discounted.

As others have said in the links though, there are better designs about.

There is nothing wrong with the Joby S4 design, it just needs to lose 2 rotors (earlier designs had 12 rotors, so they can do it). Also, Disk Loading is low @ 9.4 lb/sq ft, much better than most tilt rotors,e.g. Leonardo AW609 15.9 lb/sq ft.
https://nari.arc.nasa.gov/sites/default/files/attachments/Stoll-TVFW-Aug2015.pdf
A good example of a 4 Rotor design is the Overair Butterly (a spinoff of Karem Air, https://www.overair.com/). Looks like a Joby with 2 less rotors.
Don’t worry. About the batteries, you just need an APU. Remember the “Miracle on the Hudson”, US Airways 1549 lost both engines then started the APU https://simpleflying.com/the-miracle-on-the-hudson/

Much of my information on the Joby comes from a very wise person, called 'account deleted' on the old articles here! ;-)

'Losing two rotors' even if intentionally done ;-), does not sound like a trivial design change to me.

And another young man, called Gryf, did a great job of convincing me of the virtues of the BETA’s ALIA-250, which as the name says is going for the much more practical in the event of headwinds etc, 250 mile maximum range, so that 100 mile trips can be undertaken with full confidence without pushing any limits.

He also talked up the VEA Aviation PA-890, on solid grounds, I thought, when I had a looked at it.

The Beta Alia-250 and Joby S4 are both being reviewed by the USAF. Their designs look like interesting developments for eVTOL. The Joby S4 has 6 rotors for safety and engine out backup. Aircraft and older VTOL designs all went through the same process. Early aircraft had 3, 4, 6, and 8 engines because of reliability issues with their engines.
Today, most airliners have only two engines, so engine reliability is not an issue unless you fly into a flock of birds and lose both engines like US Airways 1549.
The Piasecki PA-890 is a compound helicopter and until it transitions into horizontal flight acts exactly like a helicopter with low disk loading and hover capabilities.

While changing the Joby design is not “trivial”, it would not be very difficult since it
uses electric motors, so no complex mechanical linkage redesign would be necessary.

Assessment: the Beta Alia-250 looks like it has the lowest drag after rotors are stopped, since it has a single pusher propeller in the rear. This makes it appear to be the most aerodynamic which is critical for battery powered aircraft.

For helicopters, stay with a “conventional” design like the Marenco M12 Hybrid
https://www.marenco-swisshelicopter.com/
Marenco is led by Martin Stucki, the creator of the former Kopter SH-09 (now the Leonardo Kopter AW09).

I've never heard of Marenco, and they don't appear to be moving to electric as yet, which may be a wise choice but makes what they do a bit outside the comparison.

The Beta looks nicer than the Joby, to me, but then one should never write off Toyota, and their solid state batteries should come in handy for flight in the second half of the decade.

I don't fancy Toyota's fuel cells in aviation, they are just trying to take as much cost as possible out by staying low temperature and away from liquid hydrogen, methanol cells etc.