As part of its commitment to accelerating the use of sustainable technologies in the NTT INDYCAR SERIES, Bridgestone Americas (Bridgestone) has developed an all-new race tire with a sidewall made with natural rubber derived from the guayule desert shrub. Bridgestone made the competition debut of these Firestone Firehawk alternate race tires made with guayule at the Big Machine Music City Grand Prix in Nashville 5-7 Aug. (Earlier post.) 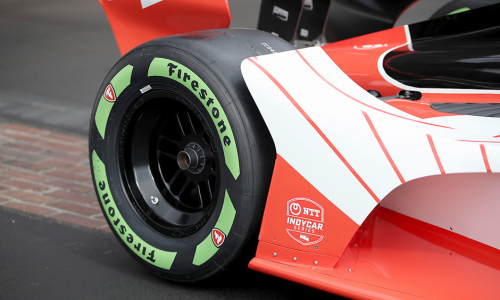 Bridgestone is using racing to demonstrate the performance of natural rubber by developing an all-new race tire with a sidewall made of guayule. Guayule holds promise as an alternative crop for America’s drought-stricken desert southwest and a domestic source of natural rubber.

Bridgestone is using racing as a proving ground to demonstrate the performance of this rubber material, which it has been heavily researching for more than a decade. Guayule is grown and processed at the company’s R&D facilities in Arizona and made into the Firestone Firehawk alternate race tires at its Akron, Ohio, race tire production facility.

Firestone Firehawk race tires with sidewalls made with guayule-derived natural rubber were introduced at the Indy 500 Pit Stop Challenge in May 2022 as a first look before debuting in competition as the alternate race tire at the Big Machine Music City Grand Prix. Bridgestone plans to incorporate guayule natural rubber into more of its race tires in 2023.

Guayule is a heat tolerant, woody shrub that thrives in America’s desert southwest. The shrub can be farmed with existing row-crop equipment, helping to save costs for farmers.

Bridgestone believes guayule rubber has the potential to have a positive economic effect while aiding in reducing the energy and other environmental impacts associated with the transportation of rubber sourced overseas.

To date, Bridgestone has invested more than $100 million in its efforts to commercialize guayule, achieving major milestones such as producing the first tire containing guayule-derived natural rubber in 2015 and continued expansion of its guayule molecular breeding program. Bridgestone aims to commercialize use of guayule rubber in tires by 2030.