Researchers at Worcester Polytechnic Institute (WPI) have developed a sustainable lithium recovery process which can selectively leach and recover lithium with formic acid before recycling valuable metals. With their method, lithium can be 99.8% recovered from layered oxide cathode materials with 99.994% purity.

In addition, this lithium recovery process is affordable, compared to typical hydrometallurgical process, by saving 11.15% per kilogram spent LIBs. An open-access paper on the work is published in the RSC journal Green Chemistry. 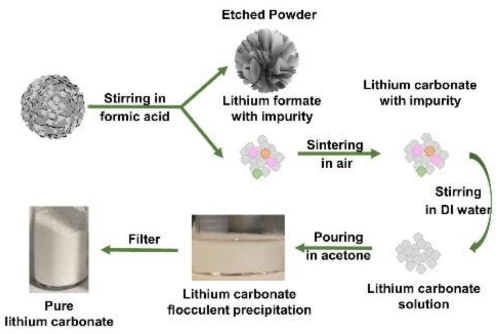 Meanwhile, due to the long lead time and limit production to mine and brine operations the demand may outstrip supply as early as 2022. As the economy recovers from the pandemic, the price of the most common traded forms of battery-grade lithium salt in the global market including Li2CO3 and LiOH was increased very significantly in September 2021. The price of battery-grade Li2CO3 in 2022 reached $76,700 per ton, which surpasses the previous cost of $24,750 per ton in March 2018. Moreover, LiOH price rose an average of $77.5 per kilogram. Whether it is an excessive increase in the price of lithium or an inequality between supply and demand growth of lithium, it will cause a devastating impact to the development of EVs, mobile electronics and energy storages.

As there are 5-7% of lithium in spent LIBs depending on different types of LIBs, recycling is an effective way to reduce the bottleneck of the lithium supply chain and shorten the supply-demand gap of lithium. For example, a single car LIB pack based on LiNi0.5Mn0.3Co0.2O2 contains around 8 kg of lithium. It is predicted that the complete recycling system would reduce the demand for mined lithium to 37%. However, a rare focus was placed on recycling lithium from spent LIBs because it is less expensive than other elements, such as Co. Nevertheless, with the sharp rise in lithium price and the increased number of spent LIBs, the situation starts to be upturned.

The WPI team developed a highly selective process of lithium extraction via concentrated formic acid leaching. In this process, lithium is preferentially extracted with only a trace amount of transition metals (< 5%) leached into the solution. The optimized condition is obtained at 60°C for 5 hours.

All chemicals can be reused via a facile distillation process, thereby allowing a fully closed-loop process for environmentally friendly lithium recovery.