In this year’s largest methanol order to date, the Alfa Laval FCM (Fuel Conditioning Module) Methanol will be the low-flashpoint fuel supply system (LFSS) on six dual-fuel container vessels. The system was chosen for both its real-life performance and its high design flexibility. 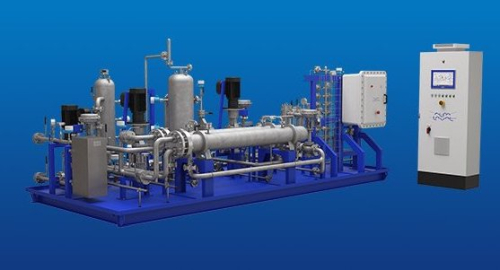 Alfa Laval will provide the methanol LFSS for six 1170 TEU container vessels ordered by Eastaway, a member of the X-Press Feeders Group. The new vessel series, to be built at Chinese shipyards Ningbo Xinle Shipbuilding Group Co., Ltd and New Dayang Shipbuilding Co., Ltd, will have two-stroke MAN B&W ME-LGIM engines that can run on methanol as well as conventional fuels. The FCM Methanol deliveries will begin in June 2023.

The FCM Methanol is a dual-stage, pressurized system that supplies methanol safely and automatically. It can be arranged to feed multiple fuel lines simultaneously with different process parameters, thereby meeting the needs of multiple engines and boilers.

The system’s automation handles all necessary fuel routines, ensuring that the methanol is conditioned and ready for a start signal from the engine control system (EGC). Upon a stop signal from the EGC, the system safely returns to standby.

Control and monitoring are handled from a control cabinet located within a safe zone, or from the vessel’s automation system via Modbus serial link. Advanced troubleshooting can be performed from any control point, without entering the hazardous zone.

To prevent leakage, the methanol pumps are equipped with magnetic couplings as standard. The heat exchangers that control the fuel’s temperature are fed by a built-in glycol water circuit, which safely segregates the methanol from the vessel’s heating and cooling media. The 10-micron, double block-and-bleed duplex filter allows maintenance to be per- formed safely on one filter chamber while the other remains in operation.

Because methanol technology is a new element in shipbuilding, yards adopt different setups to suit their learning curve. Given the complexity and scope in this project, the yards have hired engineering companies to procure and integrate the methanol-related components. The FCM Methanol was selected due to its unique flexibility and Alfa Laval’s extensive methanol experience.

With mature technologies and reliable automation, the FCM Methanol safely supplies methanol within the flow rate, pressure, temperature, and filtration parameters specified by the engine maker. Because it can be adapted to any engine and vessel design, it enables turnkey LFSS deliveries for easy installation. Since 2015, the system has been chosen in nearly 20 methanol projects for more than 10 large shipping companies.