Canada-based Taseko Mines Limited said that the US Environmental Protection Agency (EPA) has publicly issued a draft Underground Injection Control (UIC) permit for Taseko’s Florence Copper Project in Arizona. The public comment period for the draft federal permit will last 45 days, ending on 29 September, with a virtual public hearing to be held on 15 September.

The Draft Class III UIC Area Permit, if issued, would authorize Florence Copper to conduct commercial-scale in-situ copper recovery (ISCR) operations, and inject a dilute sulfuric acid solution into the copper orebody to recover copper-laden solution for the purpose of producing copper. EPA proposes to issue the permit for an initial well construction and testing period, staged wellfield development and mining operation for a period of up to 24 years, and at least 5 years of post-closure monitoring.

The Draft Permit includes terms and conditions for well construction and testing, operation, monitoring and reporting, aquifer restoration, wellfield closure, and post-closure monitoring for the duration of the Florence Copper Project.

The UIC permit is the final key permit required for the construction and operation of the Florence Copper commercial facility. Our project has gone through extensive scrutiny by both the Arizona Department of Environmental Quality and the EPA over the past eight years and we are confident that the rigorous work completed by both these regulatory bodies will result in permitting success in the coming months.

Taseko’s wholly owned Florence Copper, an in-situ copper recovery project, is located midway between Phoenix and Tucson near the community of Florence, Arizona. Development of the project is being performed in two phases—the first phase is a production test facility, which is followed by the second phase commercial facility. 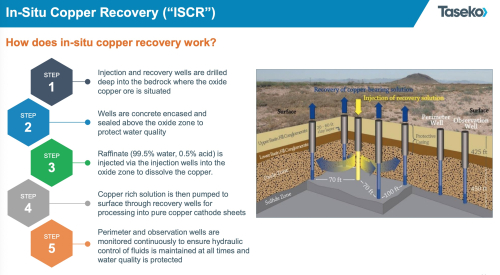 Once copper-laden solution—also known as pregnant leach solution (PLS)—is recovered from wells on the Florence Copper property, it goes for processing at the SX/EW plant. The PLS first flows into holding ponds. Then, the PLS goes through a solvent extraction process, and an organic substance is added to it. The copper is chemically attracted to the organic and clings to it until it floats on top of the PLS.

This organic now has most of the copper, and it is collected and sent to be stripped of its copper to make a solution used in the electrowinning process. In the electrowinning process, electric current is used to plate out the copper into copper cathodes. (Similar to chrome electroplating on a bumper.) All water used through this process is treated and recycled back into the extraction process. 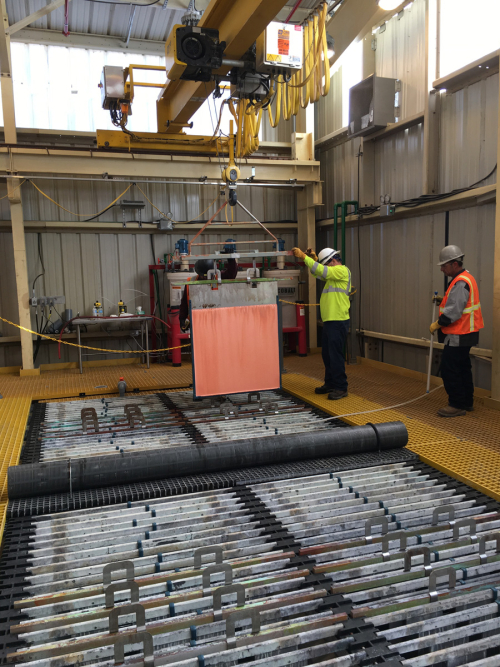 Operating the test facility successfully demonstrated the ability to produce high-quality copper cathode, within the stringent environmental guidelines of the permits, and has confirmed the project economics.

Many of the modeled assumptions were validated; that data will be used to develop strategies for solution chemistry, flow rates, reverse flow and the use of well packers for targeting solution flows. The hydrogeological model has been updated using the data provided by the test facility and is being used to refine the operating plan for the commercial production facility.

Taseko is now advancing the permit amendment process to transition the project to the commercial production facility, which includes an expanded wellfield and SX/EW plant that will produce an average of 85 million pounds of copper per year, over its 20-year life.

Florence Copper is expected to have the lowest energy and greenhouse gas-intensity of any copper producer in North America, and will reduce the United States’ reliance on foreign producers for a metal considered to be critical for the transition to a low-carbon economy.

The former owners of the Florence Copper Project (Conoco, Magma Copper, BHP Copper), spent more than US$135 million on the project; Taseko has invested a further US$165 million since 2014, including US$25 million to build the PTF.