Acura Motorsports released the first official images and details for the all-new, electrified Acura ARX-06 prototype sports car, which will make its competition debut next January at the Rolex 24 at Daytona. 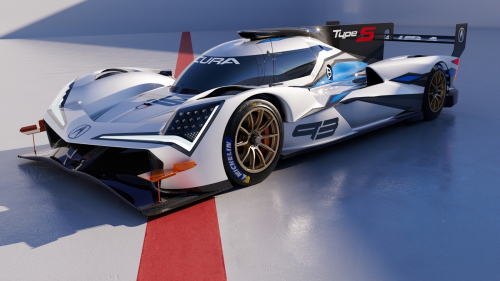 At 2.4 liters, this is the smallest displacement ICE conceived by HPD for endurance racing, yet still meets the performance target of 500 kW as measured at the rear axle by torque meters. It features a 90-degree V-angle to reduce its center of gravity and polar moment of inertia. In addition, the combustion chamber has been designed to run on sustainable low-carbon fuel.

The hybrid power plant includes an IMSA-specified electric Bosch Motor Generator Unit (MGU) and Williams Advanced Engineering battery pack. The MGU is contained in a common transmission casing and gearbox internals provided by Xtrac. The battery, within the chassis survival cell, is built by Williams Advanced Engineering. The HPD Electrical Group completed both hardware and software development to best match the spec MGU and battery pack to the Acura ICE.

We’ve taken the challenge presented by this new rule package from IMSA, and developed what we believe is a very competitive solution We’ve gone in a new direction for HPD in the design of the ICE. It is still a V6, which of course for Honda is well-known, but we have incorporated several new elements which we believe will make best use of the electric MGU and battery pack. Our new engine will rev to the maximum 10,000 rpm set by the rules, so it also makes a wonderful sound!

Chassis . Both IMSA in North America and FIA World Endurance Championship rules require manufacturers to use one of four approved prototype chassis, fitted with IMSA-homologated, manufacturer-designed and branded bodywork and engines.

In the case of the ARX-06, HPD and Acura have elected to continue their successful relationship with ORECA (ORganisation Exploitation Compétition Automobiles). Since moving into chassis design and construction in 2007, ORECA has produced a series of winning sports prototypes, including the Acura ARX-05.

Bodywork and Aerodynamics. Exterior styling of the Acura ARX-06 was led by the Acura Design Studio in Los Angeles, California, in conjunction with HPD and chassis-supplier ORECA, one of the chassis suppliers approved for prototype competition in both the IMSA WeatherTech SportsCar Championship and the World Endurance Championship.

HPD’s aerodynamics engineers and in-house CFD aero engineers worked with the Acura styling studio and chassis builder ORECA to help develop the styling and maximize the aerodynamic performance envelope of the ARX-06, while keeping it within the homologation boxes as specified by IMSA and the FIA.

Driver and team input was also sought throughout the design process. One effective change was a revision to the placement of the rearview mirrors—a seemingly minor adjustment that in fact has a large effect on vehicle aerodynamics. Using VR headsets, the drivers were able to sit in the car virtually and recommend a much lower placement for the side mirrors, improving both the aero efficiency of the ARX-06 and visibility for the drivers.

This process determined the key architecture for the Internal Combustion Engine [ICE], displacement, fuel injection and turbocharging strategy, and the intercooler layout. The Design Group then schemed different concepts and weight aspects over a three-week evaluation period.

The Acura ARX-06 concept was then finalized in a single meeting of HPD technical leaders, who then signed off on the project.

Simulation work also was carried out for a novel intercooler packaging and anti-tune induction concept to reach the performance targets while allowing the downsized engine to meet the 500Kw rules target without damaging combustion events.

Next, parts were designed and built for the V6 internal combustion engine, including machined from billet sump, block, front cover and ancillary parts made using in-house agile manufacturing techniques. Five months after the initial simulation and concept study, the Acura V6 ICE ran on the dyno and met all performance targets.

The control system was then taken to the state-of-the art transient dyno facility at HPD where engineers tested the complete hybrid powertrain ICE-Hybrid MGU-Gearbox. This system simulates key aspects of the cars during track running and the durability cycle, including running complete “laps” of a circuit, including 12- and 24-hour endurance runs with shifting, acceleration and braking all reproduced on the dyno.

The Aerodynamic Group at HPD made use of its in-house CFD capability during the design phase to optimize aerodynamic and cooling performance. The group worked closely with ORECA on the overall aerodynamic concept of the ARX-06. This has been recently validated in a full-scale wind tunnel test. HPD aerodynamists, using advanced simulation techniques, are working with IMSA to ensure the safety of the racing car, and that it satisfies stringent flip-over criteria for high speed prototype sportscars.

The public unveiling of the Acura ARX-06 will take place 19 August, at The Quail, a Motorsports Gathering, in Carmel, California.