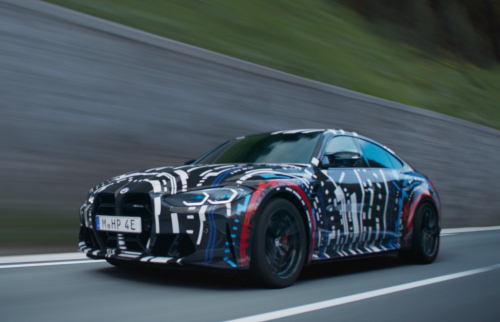 With the completely new drive concept, BMW M GmbH is underscoring its development expertise and, therefore, also its ability to transfer the essence of the letter M into the world of locally emission-free mobility. The purely electric drive system is combined with innovative control systems to redefine the combination of dynamics, agility and precision that is characteristic of BMW M automobiles in a high-performance sports car.

In order to now bring the drive and chassis technology designed for future, purely electric high-performance cars onto the road for test and tuning drives, the engineers at BMW M GmbH have developed a test vehicle based on the BMW i4 M50. The purely electrically powered coupe has been created with a modified body in typical BMW M GmbH style, the wide wheel arches of which permit the integration of specifically manufactured high-performance front and rear axle designs.

The front end of the vehicle features an adapted body strut concept taken from the BMW M3/ M4 series for particularly high torsional rigidity in extremely dynamic driving situations. The arrangement of the radiator units is also based on the configuration developed for the current high-performance sports cars.

The core of the high-performance drive system now making its debut on the road in the test vehicle is an electric M xDrive four-wheel drive system with four electric motors. The fact that all four wheels are each driven by an electric motor opens up completely new possibilities for infinitely variable, extremely precise and at the same time very fast distribution of drive torque.

Within milliseconds, the power and torque of the spontaneously reacting electric motors can be dosed so precisely that the load demand signalled via the accelerator pedal can be realized at a level of dynamics that is unattainable using conventional drive systems.

This means that the driver is able to experience entirely new performance characteristics even under extremely demanding conditions such as in highly dynamic situations or adverse road conditions.

Electrification opens up completely new degrees of freedom for us to create M-typical dynamics. And we can already see that we can exploit this potential to the maximum, so that our high-performance sports cars will continue to offer the M-typical and incomparable combination of dynamics, agility and precision in the locally emission-free future.

The precision during the transfer of drive torque in particular benefits significantly from the electric M xDrive four-wheel drive system. The four motors are connected to a central, highly integrated control unit that permanently monitors the driving condition and the driver’s wishes. The ideal power transmission to the road is calculated within milliseconds from the values for the accelerator pedal position, steering angle, longitudinal and lateral acceleration, wheel speeds and other parameters. The signals for this are transmitted just as quickly and directly via a multi-plate clutch and differentials to the four motors, which are able to implement them immediately and precisely.

This form of vehicle dynamics and drive control was brought to practical maturity in intensive development and test phases, initially on virtual models and then on test benches. For completely realistic application of the hardware and software developed for this purpose, the concept test vehicle is now being put on the road.

The interior of the four-door coupe is equipped with extensive measuring technology that can be used to analyse in detail every completed driving situation. In this way, the theoretical results for the perfect distribution of drive torque can be compared in the rolling test laboratory with reality on the road and taken into account for further programming.

This detailed work is crucial to ensure that future high-performance models will also be characterized by the BMW M linear build-up of drive power and lateral dynamics that permits controllable handling right up to the limits. The fact that this limit range is shifted even further by the new drive principle was already apparent during the first test kilometers of the concept test vehicle on closed-off roads.

Due to the particularly sensitive dosage of drive torque and conversion without perceptible latency, significantly higher cornering speeds can be achieved, even on rain-soaked or snow-covered roads, for example. In this case, the vehicle steers effortlessly and without a tendency to understeer, as the drive torque for the outside rear wheel has already been increased parallel to the steering angle.

The high-performance character of the new drive system is also evident in the recuperation of braking energy. Right up to the limits of driving dynamics, the four motors can assume the function of a generator when braking before a bend, for example, and feed electricity back into the high-voltage battery.