American Rheinmetall Vehicles, a leading developer of tactical wheeled and tracked combat vehicles and systems has formed a strategic collaboration with GM Defense LLC, to compete in the US Army’s Common Tactical Truck (CTT) program. The CTT program seeks to identify a replacement platform for the Army’s Family of Heavy Tactical Vehicles.

The Army expects to execute multiple Prototype Projects before determining whether to proceed to initial production that could entail purchase of approximately 5,700 vehicles at a value of around $5 billion. A Request for Prototype Proposals for the first phase was issued in late June with an expected Contract Award in December 2022. 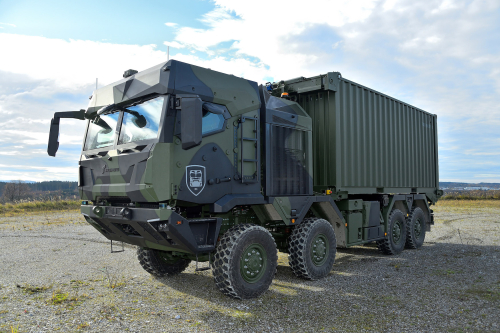 American Rheinmetall Vehicles and GM Defense are offering the US Army the HX3-CTT, a derivative of the HX3, in response to the first phase of the Army’s Common Tactical Truck program.

An Americanized HX3 forms the basis of what the American Rheinmetall Vehicles and GM Defense team will offer the Army in the first phase of the CTT program. Combined with an open architecture, the commercial backbone of the HX3 will support persistent modernization and allow for increases in capability as technologies mature. This will reduce obsolescence issues and overall lifecycle costs.

GM Defense is a rapidly expanding, wholly-owned subsidiary of General Motors. As GM’s purpose-built government-facing entity, GM Defense will bring its formidable manufacturing capabilities and technological excellence to the CTT team, leveraging GM’s innovation and portfolio of commercial technologies to advance customer capabilities. Having been selected to deliver the Infantry Squad Vehicle (ISV) to the Army under an Other Transaction Authority (OTA) contract, GM Defense understands rapid prototyping, agile design and engineering, and rapid delivery.

The CTT Program is a rapid prototyping effort that uses a middle-tier acquisition strategy and OTAs to enable the Army to procure and test tactical truck prototypes quickly to replace its family of heavy tactical trucks.

The program will enable the Army to replace legacy vehicles such as the Palletized Load System (PLS), Heavy Expanded Mobility Tactical Truck (HEMTT), M915 Line Haul Tractor, and other platforms in the current heavy and medium tactical wheeled fleet. A truck with maximum commercial elements, able to perform military missions, and that can bring commonality among mission roles are top priorities for the Army in the program.

The HX3-CTT is the new, next-gen variant of the globally successful HX family of military-off-the-shelf tactical trucks. It possesses an extremely high level of commonality and modularity across variants: cargo, load handling systems, tankers, and line haul tractors. With an HX family that can scale from 4x4 to 10x10, the HX can meet any military need.

GMC HUMMER EV. GM Defense was also recently selected by the US Army to provide a battery electric vehicle for analysis and demonstration. GM Defense will leverage the GMC HUMMER EV, featuring GM’s Ultium Platform, to meet the US Army’s requirement for a light- to heavy-duty battery electric vehicle to support reduced reliance on fossil fuels both in the operational and garrison environments.