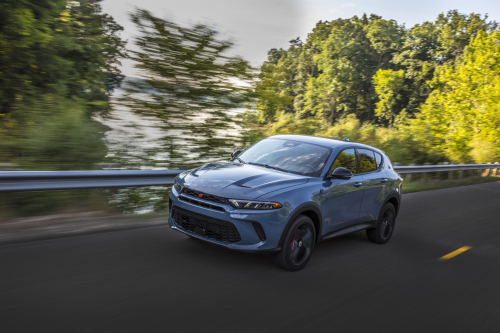 The Hornet R/T offers more than 30 miles of all-electric range. An electric induction motor powers the rear axle; the 90-kW electric motor can deliver 184 lb-ft (250 N·m) of torque from 0 rpm. Power is further optimized by a 15.5-kWh lithium-ion battery pack, fitted with a refrigerant gas cooling circuit to keep the battery at its optimum temperature.

A starter generator delivers torque to the engine belt, aiding in dynamic response and recharging of the battery. A high-power inverter and 7.4-kW charging module allow for a full battery charge to be reached in approximately 2.5 hours using a Level 2 charger. The R/T PHEV system is paired with a six-speed automatic transmission.

A performance-focused Sport Mode for the Hornet R/T PHEV is accessible by a dedicated button on the center console, unlocking a sharper throttle, optimized shift schedule, access to the hybrid system’s optimized power and torque, and a tighter steering wheel feel.

Drivers also have the ability to select from among three hybrid driving modes to customize the Hornet R/T PHEV to best fit their driving needs. Operated by a dedicated button conveniently located on the steering wheel, available driving modes include:

The Hornet R/T PHEV also works to replenish battery power with a regenerative braking feature that recovers kinetic energy and stores it in the battery for future deployment, as well as an e-Coasting function, activated during throttle release, that allows for shorter stopping distances and additional energy recovery.

The entry-level Dodge Hornet GT model is the industry’s quickest, most powerful utility vehicle under $30,000. The GT is powered by the Hurricane4 engine, a 2.0-liter turbocharged inline four-cylinder with direct fuel injection and engine stop-start technology, providing iconic dynamic performance to the tune of 265-plus horsepower and 295 lb-ft (400 N·m) of torque, combined with low emissions. The engine is mated to a fully electronic nine-speed transmission.

on the steering wheel, that unlocks a sharper throttle, optimized shift schedule, access to full power and torque and a tighter steering wheel feel, and a stiffer suspension setting if equipped with Dual Stage Valve shocks, helping the GT move from 0 to 60 mph in 6.5 seconds.

Both powertrains feature standard all-wheel drive. The Hornet R/T PHEV all-wheel drive system adjusts power automatically between the 1.3-liter engine that powers the front axle and the electric motor that drives the rear wheels, providing optimal traction and control to all four wheels.

Hmmm.  The R/T PHEV sounds good from the specs, but I'm leery of buying anything in its first year of production.