Current work on hydrogen combustion engines worldwide is predominantly being done for commercial vehicles with a relatively low specific output of around 50 kW per liter of displacement. For the passenger car sector, this is insufficient, said Vincenzo Bevilacqua, Senior Expert Engine Simulation at Porsche Engineering.

We have therefore developed a hydrogen combustion engine that aims to match the power and torque of current high-performance gasoline engines as a concept study. At the same time, we also had the objective of achieving low fuel consumption and keeping emissions at the same level as ambient air. The starting point for our study was an existing 4.4-liter eight-cylinder gasoline engine—or rather, its digital data set, since we conducted the entire study virtually using engine performance simulations.

Modifications to the engine model included a higher compression ratio and combustion adapted to hydrogen, but most importantly, a new turbocharging system.

For clean combustion of hydrogen, the turbochargers have to, on the one hand, provide around twice as much air mass as they do in gasoline engines. On the other hand, however, the lower exhaust gas temperatures result in a lack of energy for their propulsion on the exhaust side.

This discrepancy cannot be resolved with conventional turbochargers. Porsche Engineering has therefore examined four alternative, particularly powerful turbocharging concepts, some of which come from the world of motorsport. 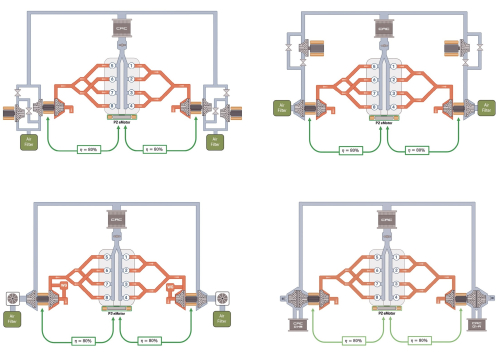 All systems consist of several electrically assisted turbochargers, some of them combined with additional control valves in the air system or electrically driven compressors. Each turbocharging system showed specific advantages and disadvantages, said Bevilacqua. The choice of the right concept is therefore highly dependent on the requirements profile of the hydrogen engine in question.

For the engine study concerned, the development team selected a turbocharging system with back-to-back compressors. The special feature of this design is the coaxial arrangement of two compressor stages, which are driven by the turbine or the supporting electric motor using a common shaft. The process air flows through the first compressor, is cooled in the intercooler and then recompressed in the second stage.

With an output of around 440 kW, the hydrogen engine is on par with the original gasoline unit. In order to better assess the performance of the powertrain, Porsche Engineering tested it in a luxury-segment reference vehicle with a relatively high total weight of 2,650 kg on the Nürburgring Nordschleife—albeit entirely virtually: the drive was carried out using what is known as a digital twin, i.e. a computer-based representation of the real vehicle. 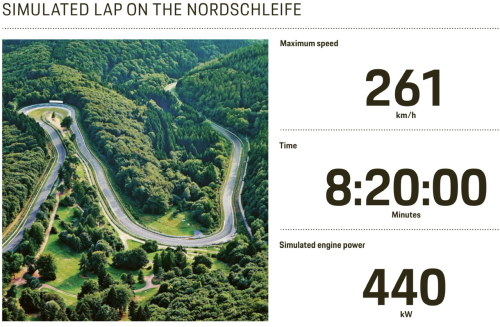 With a lap time of eight minutes and 20 seconds, the vehicle demonstrated high potential with regard to driving dynamics. Due to its chemical composition, neither hydrocarbons nor carbon monoxide are released during hydrogen combustion, and nor do particulates play a role.

In terms of optimizing emissions by the hydrogen engine, the experts at Porsche Engineering therefore concentrated on NOx. In extensive optimization rounds, they adapted the engine’s operating strategy for the cleanest possible combustion. Their approach was to keep the level of raw emissions low by means of extremely lean and therefore colder combustion, making it possible to dispense with an exhaust aftertreatment system.

As it turned out, the nitrogen oxide emissions are well below the limits set by the Euro 7 standard currently under discussion and are close to zero over the entire engine map.

In addition to its barely measurable emissions, the hydrogen engine offers high efficiency in the WLTP measurement cycle as well as in customer-relevant cycles thanks to its lean combustion.

We have thereby fulfilled our self-imposed project goal: the development of a clean, economical and sporty hydrogen engine, across the board.

The cost of a hydrogen powertrain in series production could be comparable to that of a gasoline engine. Although the turbocharger system and a number of mechanical components of the hydrogen engine are more complex and therefore more expensive, there is no need for the exhaust gas aftertreatment required for the gasoline engine under Euro 7.

The hydrogen engine is unlikely to enter production in its current form, but that wasn’t the goal of the project. Instead, the focus was on examining the technical potential of the alternative drive technology and expanding the capabilities of existing engineering tools.

The study allowed us to gain valuable insights with regard to the development of high-performance hydrogen engines and add models and methods specifically for hydrogen to our virtual simulation methodology. With this know-how, we are ready to efficiently handle future customer projects.