An open-access paper on the work is published in the RSC journal Chemical Communications. 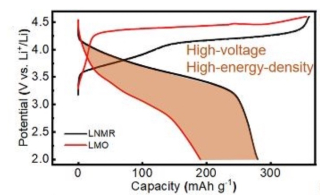 Coupled with oxygen redox chemistry and cationic redox reactions, layered lithium rich oxides (LLROs) are standing out overall structure as candidate cathode materials for next-generation LIBs. LLROs are usually consist of two phases of Li2MnO3 (LMO) with a space group of C2/m and LiTMO2 (TM refers to a transition metal element) with a space group of R-3m. The ordinary modification of LLROs is usually aimed at xLi2MnO3·(1−x)LiTMO2, the solid solution of two layered components.

… However, irreversible oxygen release occurs during the initial charging process of LMO, leading to irreversible redox of oxygen, which is the only redox process without cationic redox. Meanwhile, LMO also face other challenges such as capacity attenuation and low discharge capacity, which hinder its commercial application.

Ruthenium in a battery - sounds rare and expensive.